Games, Talent and Lasting Love: Our Week in Wisdom 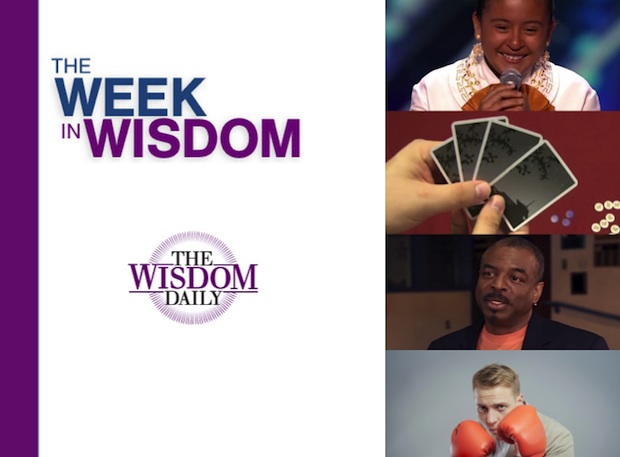 On The Wisdom Daily this week (July 27-31), we brought you a variety of issues and stories, including: a review of the card game Hanabi, a singer’s inspiring viral video, an essay about overreacting, an Auschwitz survivor’s love letters and an animal cruelty controversy. Did you grow wiser this week? We hope The Wisdom Daily played a part.

The All-American Sport of Being Offended – Skip Simonds

A recent post on The Wisdom Daily started me thinking about the line between being personally offended about something (in this case, a bobblehead offered to a select group of charitable donors) and being publicly offended… READ MORE

A New Way to Deal: We’re All In This Together – Brad Hirschfield

A friend said, “We all win, or nobody wins,” by way of introducing my family to a new card game recently. Hanabi, which means “fireworks” in Japanese, is simple to learn, fun to play and, most significantly, quite profound to experience… READ MORE

A Lesson in Letting Your Talent Shine – Irwin Kula

Did?you see the remarkable Alondra Santos sing “Cucurrucuc? Paloma” last month on NBC’s America’s Got Talent? The 13-year-old’s performance made the audience go wild. What is it about her that moved people so?… READ MORE

Imagine writing love letters from Auschwitz. That’s exactly what Ron Jones did. Captured in 1942 by the Nazis as a British prisoner of war, the Welsh soldier penned heartfelt messages to his sweetheart during his darkest days as a laborer in Camp E715… READ MORE

Dive into some of the most fascinating reads that we’ve spotted elsewhere – including insightful perspectives on what constitutes a miracle, where modern-day philosophy is thriving, how boredom enriches us and why birth order influence is a myth…?READ MORE

The Selective Outrage Triggered by Cecil the Lion – Brad Hirschfield

From Odyssey Networks’ Faith on the Record series: The dentist from Minnesota who embarked on a high-priced hunt in Zimbabwe – and proudly lured a beloved lion away from protected land in order to kill him – has provoked an angry response around the world… READ MORE