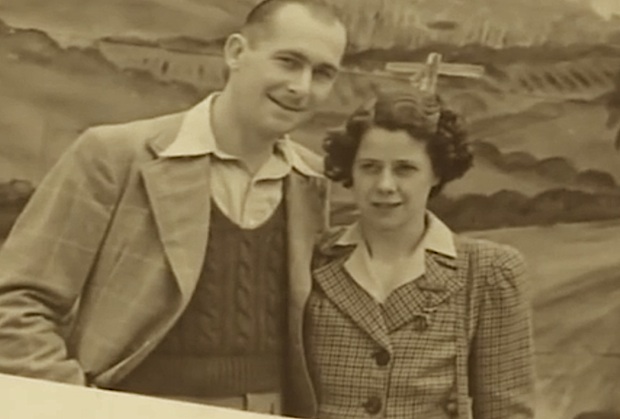 Imagine writing love letters from Auschwitz. That’s exactly what Welsh soldier Ron Jones did. Captured in 1942 by the Nazis as a British prisoner of war, Jones penned heartfelt messages to his sweetheart, Gwladys; the two met as teenagers and experienced “love at first sight.” From his darkest days as a laborer in Camp E715 at Auschwitz, Jones poured out his heart in writing. And you can see him read his letters in the BBC documentary below, From Auschwitz With Love.

“I am, like you dear, awaiting the day when we are together again and there’s no need to write, we will be able to say all we want to in each other’s arms… Sometimes it gets unbearable then I lie down and try and sleep to forget. More often than not it’s impossible darling… I love you terrible and it seems as though I love you more now than when I left.”

I feel compelled to wonder about the immense power of those letters – not simply because the fundamental ability to hang onto feelings of love in a place full of so much hate is, itself, remarkable – but also because that ability to love has the potential to save the lives of whomever can find it within themselves.

If you haven’t read Viktor Frankl’s 1946 classic, Man’s Search For Meaning, you should. My thoughts here, upon seeing From Auschwitz With Love, are really just an extension of his.

Call it “meaning,” call it “love,” call it what you want. We can sometimes help ourselves weather even the most terrible situations by insisting that no matter how painful the circumstances, or how seemingly crazy it is to believe in passion and humanity, our hearts and minds are capable of finding meaning, purpose and love – no matter where we are – if we only dare to try.

Doing this is really a gift we can give ourselves, and one which nobody can take from us. That is what makes these events so compelling, and so accessible. If one can experience love in Auschwitz, then I have to believe we can probably experience it anywhere. Watch Jones’ moving story in the 30-minute BBC One documentary, seen here: