A Lesson in Letting Your Talent Shine 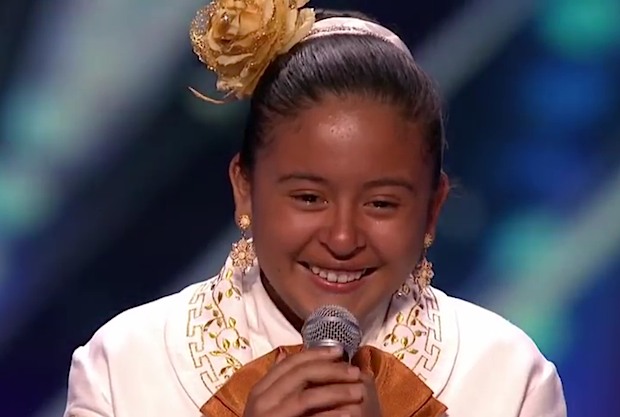 Did you see the remarkable Alondra Santos last month on NBC’s America’s Got Talent? The 13-year-old’s performance made the audience go wild. What is it about her that moved people so?

For me, three insights stand out. The first is that we all want to believe that the gifts we’re given can be realized. There’s so much talent in the world – so much ability that we’re each blessed with that goes unnoticed because we’re too fearful. Alondra overcame her jitters in that performance, and her tears of joy flowed as she narrowed the gap between her own sense of self and the outside world. And that’s a gap many of us experience. While the broadcast wasn’t actually her first time onstage – she wowed audiences as a 2013 finalist on Spanish television’s junior version of The Voice (La Voz Kids) – even a seasoned performer gets nervous and it’s inspiring to see her prevail.

The second insight is we all need people – parents, siblings, friends and colleagues – to believe in us. Alondra came onstage with her large family supporting her in the wings; three generations who, at some point, witnessed in her what she may not have fully recognized in herself. Despite the American myth of “the self-made man,” watching this young girl’s loved ones brim with pride, as their child does something amazing, reminds us of what we all know: Nobody does it alone.

Finally, with all the cynicism, polarization, celebrity vacuousness and racial tensions pervading our public culture, this clip captures a hopefulness about the future. Watch the spirit of the music flow through Alondra as she puts her whole heart and soul into a soaring melody in the Mariachi tradition – “Cucurrucuc? Paloma” – a song with lyrics that many of us probably don’t understand.

Maybe it’s Donald’s Trump’s recent repulsive comments about Mexicans, but this young Mexican-American’s success tells us the truth about ourselves. We would not be as great a country without our rich diversity of people and cultures. Yes, America’s got talent… and that includes Mexican-American talent.

So what gifts and treasures do you hold inside, out of lack of confidence, that you need to bring to the world? Who are the people in your life who have believed in you and supported you, who need you now to believe in them? What cultural expression from a tradition not your own – music, art, literature – have you recently enjoyed?