Why Not Call ISIS What It Is? 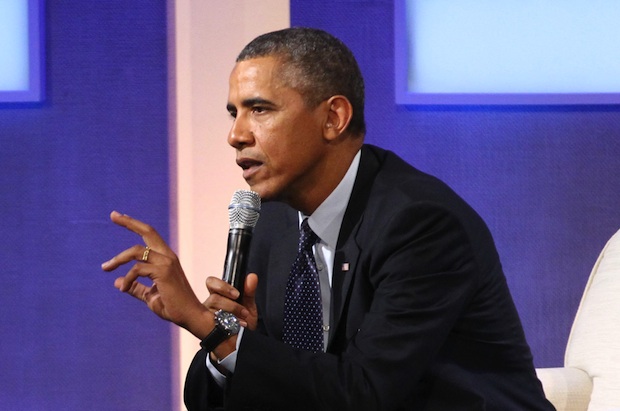 Much has been made about the Obama administration’s intent on identifying ISIS and others as “murderous extremists,” rather than “Islamic extremists.” The President sees ISIS and the variety of regional al-Qa’das, the al-Nusra Front, al-Shabaab, the al- Aqsa Martyr’s Brigade, Boko Haram and the dozens of other brutal organizations (every one of which claims to be true expressions of Islam) as evil criminals. His narrative about ISIS amounts to: power-hungry psychopaths cynically using Muslim ideology to plunder and conquer.

Meanwhile, his reluctance to label these terrorist groups as interpretations of Islam has created much blowback from traditionalists, conservatives, Republicans and even some of us left-of-center.

When people are afraid, they desperately crave certainty. But certainty constricts the collective imagination we need for solutions.

At last month’s National Prayer Breakfast, the President said, “Lest we get on our high horse and think this is unique to some other place, remember that during the Crusades and the Inquisition, people committed terrible deeds in the name of Christ. In our home country, slavery and Jim Crow all too often was justified in the name of Christ…Murderous extremism is not unique to one group or one religion.”

All religions including (especially) Christianity have had blood-saturated, death-cult, murderous expressions. As a Jew, I find this particularly notable, as historically Christians have killed far more Jews than Muslims have. Still, the president has missed the more important point. There is indeed a moral equivalency between murderous Christianity and murderous Islam – but there’s also a difference. Christianity reformed itself in a long, difficult, and bloody process. And although it still has its eccentric and nasty expressions, as does Judaism, its adherents no longer behead, crucify and burn people.

Islam still needs to go through such a reformation. By not saying this (in his attempt to provide context), the President came off as aloof about the real threats of this present-day, cancerous form of Islam.

When we focus on the brutality of ISIS and call it evil, crazy or power-mad, we miss the point. Whatever their psychopathologies, holy warriors clearly have a powerful faith that an army of Allah, sent to bring forth His kingdom on Earth, will ultimately rout the infidels (in spite of the superior power of the infidels’ tanks, planes and bombs).

It may be impossible, given the intense polarization and mistrust in our country, to communicate with nuance about Islamic extremism. But it would be good if our President could explain to conservatives why he’s reluctant to label Islamic terrorism Islamic. That he’s taking into account the sensitivities of moderate Muslim allies, like Saudi Arabia, United Arab Emirates, Jordan, and Qatar. That because ISIS wants a war with Western civilization, he’s using almost the exact same words as Bush and Cheney did, in order to avoid the risk of our being seen as painting Islam as evil.

It would also be good if the President were at least honest with us (if not with our moderate Arab allies) that for decades, our ally Saudi Arabia has supported the most puritanical and extremist form of Islam – Wahhabism – across the Muslim world. That wealthy donors in Qatar, Kuwait, and Saudi Arabia have funded ISIS for years. That impoverished Arab societies are breeding grounds for increasing extremism because, according to the U.N., oppressive, autocratic regimes have crippled their people by limiting political freedom,? repressing women and stifling creativity by isolating citizens from the world of ideas. And that we’ve been complicit in not caring what happened to these societies, so long as we got our oil and regional stability.

We need to point out to Arab allies that there are 30,000 ISIS fighters and some five million Arab Muslim soldiers. Those millions need to get in the fight for their world, and their religion. After all, there’s precedent when it comes to Arab armies uniting to fight; they’ve fought Israel.

Finally, our President needs to explain to liberals that yes, root causes – including America’s interventions and support for dictators in the region – have contributed to this crisis. None of that justifies ISIS brutality nor absolves us of our responsibility in dealing with it. But our commander-in-chief needs to say evil exists, and that wherever evil expressions of religion occurred in the past, today evil is proliferating in the Muslim Arab world. Defeating this mix of religious, state, and non-state actors will require decades using all forms of power, including those that make liberals deeply uncomfortable.

In other words, we need the best of conservative and liberal thinking. Unfortunately, right now all we hear is the worst of both sides. We hear nightmares of powerlessness and apocalypse from one side – too often metastasized into Islamaphobia – imagining we the good guys can kill all the bad guys. From the other side we hear fantasies of soft power and redemptive guilt, imagining we can talk our way to everyone living in peace. The right is correct that we will need to employ violence. And the left is correct that violence alone won’t solve the problem of Islamic extremism.

Americans are afraid now. When people are afraid, they not only look for somebody to hate or to blame, they desperately crave certainty. But certainty constricts the collective imagination we require for solutions to this global crisis. We need to see the partial truth in others’ opinions. We need to see the ambiguity and nuance – or together, we will go down a road of destruction none of us want.