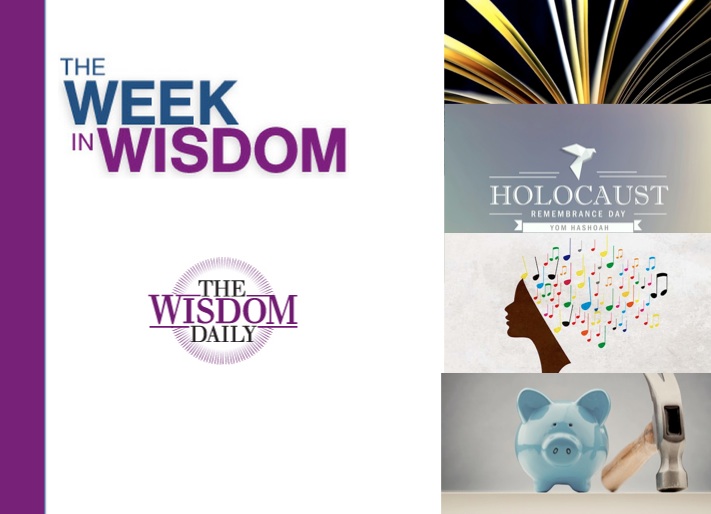 On?The Wisdom Daily this week (April 13-17), we brought you practical ways to connect your values with your finances, a poignant reflection on surviving a legacy of epic tragedy, a graphic artist’s beautiful new take on ancient texts, and a look at those who seek to exclude other belief systems as part of their “religious freedom.” Did you grow wiser this week? We hope The Wisdom Daily played a part.

The Blessing of Being a Child of Holocaust Survivors – Jonathan Jacoby

Tax Time: Should We Try to Pay Less? – Brad Hirschfield

Tax day is upon us, no secret there. And unless you’re profoundly generous and remarkably patriotic, deeply trusting the wisdom of how dollars are spent by the government, you probably feel like most people: less than thrilled about paying your taxes… READ MORE

Whether you’re an atheist or devout in your faith, whether you’re conservative or liberal, the Minimum Bible?will make everyone think! Joseph Novak’s masterful collection of spare, graphic images was inspired by each of the 66 books of the Jewish and Christian Bible… READ MORE

Freedom of Religion: What Does It Mean? – Brad Hirschfield

Although countless Americans claim to believe in religious freedom, we clearly don’t share a common understanding of what that principle means – as the ongoing disputes, including legal battles in Indiana and Alabama, from pizza shops to florists, demonstrate… READ MORE

Brad Hirschfield
From Odyssey Networks’ Faith on the Record series: The jury has returned a guilty verdict against Aaron Hernandez, ending his trial for the murder of Odin Lloyd, and sentencing the onetime NFL star to life in prison without parole. Was justice served?… READ MORE