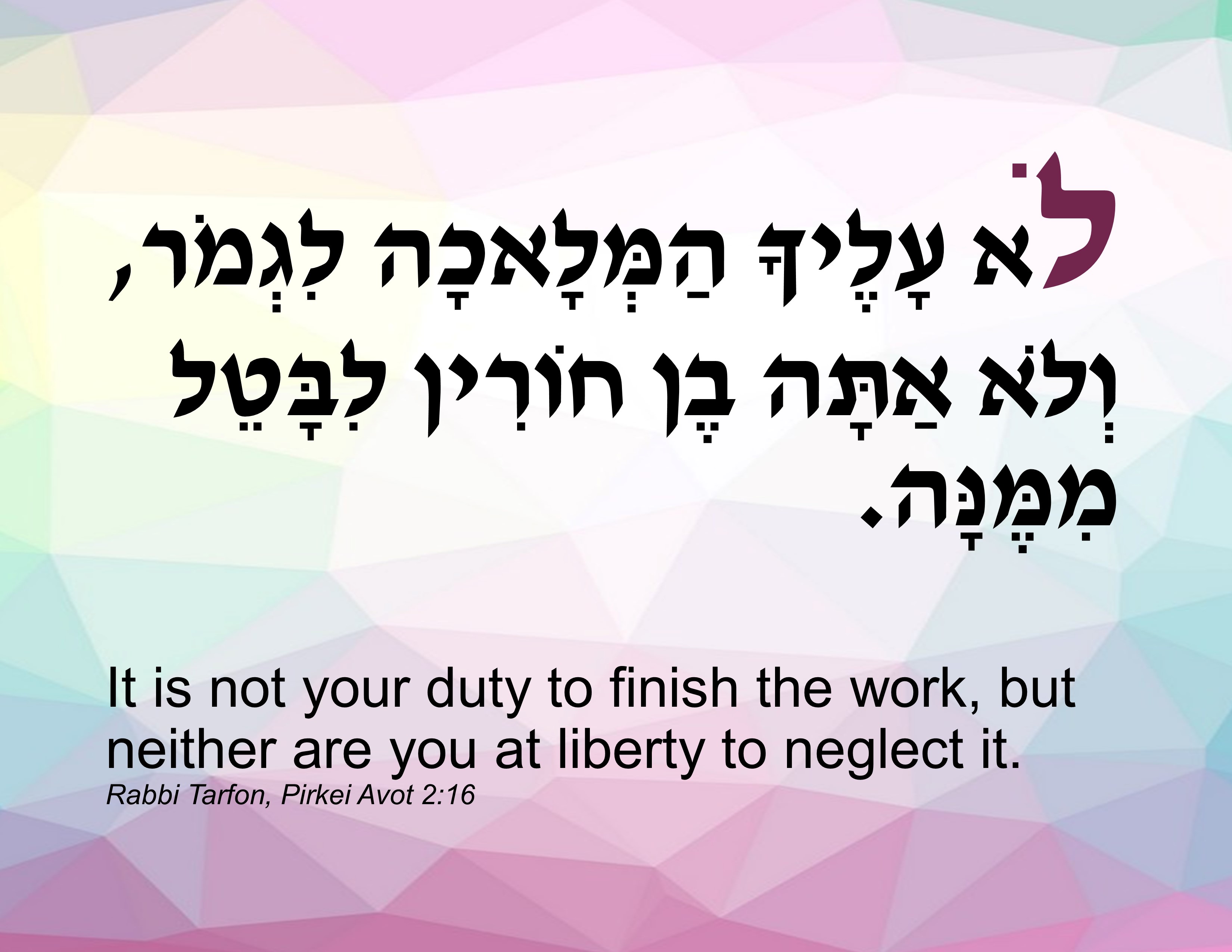 Rabbi Tarfon taught: “It is not your responsibility to finish the work [of perfecting/restoring the world], but you are not free to desist from it either.”

Aspirational, that has always been the word I have used to describe America — its beauty and its potential — and the framework I have used to see the world.

How have the last four years, and more particularly the last few days, impacted that framework of faith? A timeline will help to begin parsing that question.

Inauguration Day 2017. A speech is given by a new President — one describing a dystopian vision of America. A sad day, given my view of America, but as it turns out, maybe the best day in the next four years, as policies animated by that President’s dystopian perspective, had yet to be put in place.

Over time the new President, aided and abetted by his supporters, begins implementing policies that reflect his dystopian vision. The rhetoric becomes worse and more toxic, and truth becomes irrelevant, as “alternative facts” become the language of our body politic. People protest, women march, lawyers go to airports to protect immigrants, people stand up for gun control after the tragedy at Parkland, and the BLM protests against police violence and systemic racism. All, to what seems to be no avail, as the President and his supporters devolve into further grievance, and ultimately madness, all while disregarding the norms of our society and political systems.

A pandemic strikes, our leaders are ineffectual in combating it, and disdainful of the science needed to fight and conquer it, but science moves on and a vaccine is developed. I get tired, as do many around me, sharing my privileged position as they do. We are all richer enough that even as the system is being abused and corrupted, and we are stuck in our homes, the views of Central Park from our windows is not so bad. Not to mention that we grow richer in the midst of the madness, which is not right, and I know this. I also know that I still believe in the aspirational dream of America.

So, I support Joe Biden and Kamala Harris in a big way, and lo and behold they win. Perhaps the aspirational vision is intact, or at least, can still be reclaimed and resurrected. Progress, after all, has never been a straight line, but a circuitous path, often taking us “Two steps forward one step back.” Or perhaps not.

For the first time in modern American history, a sitting President disputes the clear results of the election, and much to my dismay and surprise is supported by a plurality of the people who voted for him, and by many of the elected officials affiliated with his party, despite their being sworn to uphold our constitution and laws — which they abandon in fealty to a man. But so what? There are enough people in positions of authority who stand up for sanity and legality, our courts rule against him, the system appears to hold. Appears to.

Fast forward to last Wednesday, when the President, against all facts and rulings, continues to maintain that the election was stolen from him and invites/summons his supporters to come to Washington. And then, in what should be an unthinkable speech, incites them to march on the Capital in what results in an attempted coup/riot/occupation of our Congress. Woe is me.

My teacher and friend wrote a Facebook post early evening on Wednesday, saying, in essence, look at your own part in causing this drama, that is the way forward. I wrote back to him privately, “Today is not the time for that, today is the time for outright condemnation.”

The night progresses, Congress, led by our Vice President — a man I see as having little to no integrity, and who has stood by and enabled the “mad king” for over four years — comes back into session, and does the work of the people, certifying the electoral college results and concluding the electoral process. The will of the people is done.

So it’s now Friday morning, and where is my Aspirational dream for America? My dream is intact, I am grateful the police did not massacre the terrorists, as in retrospect, more blood spilled would not have been good. I am grateful that once again, as in 1968, as in the McCarthy era, and many other times in American History, “the center has held.”

In that same Facebook post my friend started by saying the “civil war” has begun, but I would phrase it differently. The civil war ended today, with a minor, though frightening, skirmish where five people lost their lives, and a number of others were injured. But the four to five hour occupation of our Capital Building that occurred was put down quickly and relatively nonviolently, and reconstruction begins today. My question is, what part do you and I want to play in the reconstruction?

A final thought since we are using the civil war as our metaphor. Leadership matters — moral leadership, most of all. I believe that our historical reconstruction period would have been much different, and our country today much different, if President Abraham Lincoln had not been assassinated, and had he instead lived to lead the country through that period. My feeling about the incoming President is that he is a good and moral man, and I am glad he will be the one leading us through our own period of reconstruction.

With editing by Rabbi Brad Hirschfield