Who is Crazier – Noah or God? 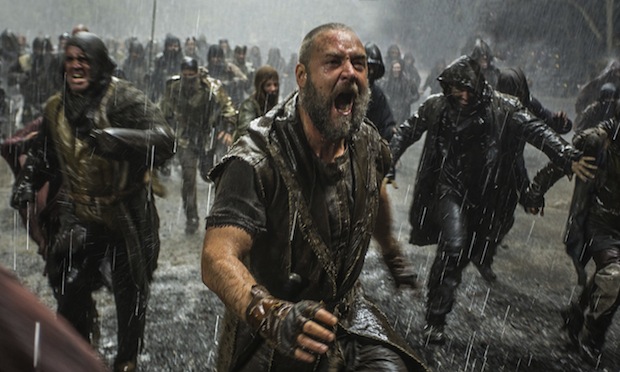 I saw the blockbuster film Noah this past Sunday. Despite the deluge (sorry) of commentary about the film – inevitable for a biblical film in culture war times – I can’t resist offering my take. Most of what has been written about Noah has centered on the film’s fidelity to the original story, which really means fidelity to the way a particular critic heard the Noah story when he was a child, or the way his particular creedal community understands the story. Watch this segment from The Daily Show as proof.

Not surprisingly, Christian and Muslim critics have expressed outrage at the film’s departure from the Bible, though interestingly, their respective understandings of the story differ. Of course, why they should feel a film whose makers claim they are taking “artistic license” with the Hebrew Bible and making the “most unbiblical biblical movie” needs to reflect a Christian or Muslim view altogether is pretty indicative of the less than positive role the Bible plays these days in helping us live up to the better angels of our nature.

The film appears at first sight utterly conventional – man is created good by the creator, is tempted to disobey, commits the “original sin” that somehow corrupts all his descendants, which angers the creator who decides to destroy everyone in a flood, except for Noah who though not a very nice guy, is good enough relative to his generation. But actually, this film may be one of the most undermining films of traditional theology.

No character in this film, neither the bad guys nor Noah, ever actually hears God directly. The word “God” is never used in the film. In this epic, God is the great projection. What distinguishes Noah is that he has a dream that seeps into his waking state in which he thinks the creator is actually speaking to him. Plenty of people in the film wish God would communicate with them but Noah alone imagines he has received some unambiguous message telling him the world is going to be destroyed in a great flood, there should be no more humankind after his youngest son dies, and that therefore he is to kill his newborn granddaughters. Noah is even crazier here than in the biblical story. To be honest, I was rooting for Noah’s wife or his son to kill the SOB.

But however crazy Noah is in this film, God is nothing but his angry, dangerous, violent projection. What would someone with no knowledge about the Bible think of a central character in an epic story who possesses unlimited power and gets so disappointed and angry in his own creation that he lashes out in murderous rage and kills every thing? Noah may be crazy but the god he imagines is a raging spiteful jerk.

Interestingly, at the climactic moment in the film when Noah’s love and compassion does win out he sees this as disobeying God! Though he has clearly done the right thing to anyone watching the movie except I guess our terrorist class, he becomes terribly depressed for not living up to God’s command. Or does Noah become depressed because he is a survivor who can’t stop hearing the screams and cries of a world he watched destroyed by the imagined creator to whom he surrendered. In other words, only when Noah stops listening to the god he imagines and trusts himself can he become a loving compassionate person. No wonder religious fundamentalists intuitively are uncomfortable with this film.

The god Noah/we imagine that no one hears directly is a projection of our very worst selves. Normal people, however disappointed they are in others not living up to their expectations, however badly their plans don’t work out, however much their hearts are broken, however angry they get, are able to manage their emotions and not lash out violently and destructively. This film invites us to be better than the gods we imagine and careful what we imagine our god is telling us.

Strangely the film leaves out what may be the Biblical story’s only redeeming wisdom – a clear and unambiguous promise from God to never again lash out so destructively lest worlds simply be destroyed one after another in paroxysms of rage, leaving God all alone. The new beginning is not that people will necessarily act differently – that will be a long evolutionary journey – but a re-imagined god – a god who will act differently right now. Can we live up to this god who sees the light? Can we live up to the promise we imposed on God and learn to live with our disappointments and to control our anger or will we destroy our worlds?? Once upon a time we were wise enough to imagine a better god. Maybe, now, again, it’s time for a new god. After all, once imagined, we have a chance to become the figment of that god’s imagination.

Postscript: I did enjoy how the film dealt with the famous question Bill Cosby’s Noah asked, “God! Who’s going to clean that up?” The animals in this film don’t poop on the ark because Noah and his family put them to sleep with special incense and they stay asleep the whole time. You gotta love interpretation!

Be sure to also watch Brad Hirschfield’s video discussion of the movie, Noah Brings in the Box Office and the Controversy.