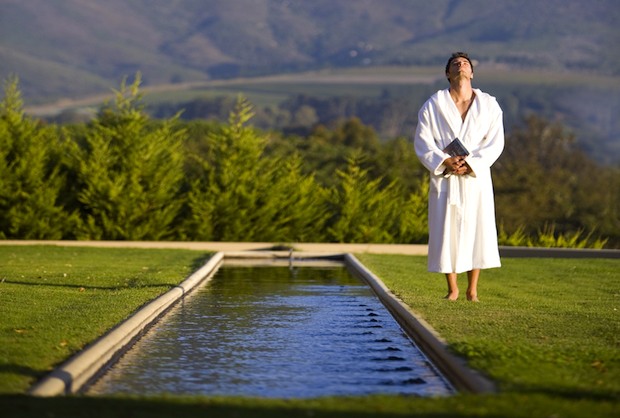 Sometimes clergy and other spiritual teachers do smart things. And sometimes they do less-than-smart things (I’m trying to be charitable here). But sometimes they just annoy the hell out of me. In this news report about “spas for the soul,” we get an example of all three! Read on to see what I mean.

You may be asking, what is a “spa for the soul”? Is it simply a cool name for a church, synagogue, temple or mosque? Or is it a place with massages and treatments that are so good, you cry out, “Oh my God“? Certainly the term could describe either, but in this case, the experience amounts to something more, even as it combines both.

With each passing day, we see that the separation of the physical from the spiritual is based on false dichotomies which do not serve us well.

We all yearn for connection to something larger than ourselves, and for many of us, that longing connects to whatever we mean by soul. Increasingly, however, millions of people are coming to the conclusion that the houses of worship which traditionally took on the job of giving our souls a workout, work less well than they did for generations past. The places may be failing believers, but the yearning persists. Enter: the spa for the soul.

Since the physical is also spiritual, sometimes a great massage is enough to restore both. Still, to fully recognize the physical-spiritual connection, it turns out some spas for soothing the body are now adding opportunities to actually nurture and treat one’s spirit, as well. For clients who want to direct primary focus to the spirit side of their health, the offerings include meditation classes, prayer opportunities, and more.

What could be bad, right? Well, it depends on whom you ask. If you ask me, this is a remarkable opportunity. In modern society, with each passing day, we see that the separation of the physical from the spiritual is based on false dichotomies which do not serve us well.

Unfortunately, some clergy – like the rabbi in the video from the news report I mentioned earlier – are more concerned with what might go wrong than with how much of this trend is right. Now there’s no doubt I share his sense that genuine, healthy spiritual development cannot happen in a vacuum, that our individual identities can’t be developed without also developing a keen awareness of those around us (traditionally, within congregations based at houses of worship). But believing this spiritual truth shouldn’t blind us to newer, wonderfully integrative and healing movements that aim to reunite body and soul for individuals.

I don’t know why clergy are so often afraid, and so condemning. I do know that to the extent they love tradition, they’ll be somewhat less disposed to embracing new trends. In fact, that may well be true for me, from time to time. But there’s a difference between condemning new faith practices and choosing to not immediately embrace them.

Wouldn’t it be more interesting and helpful to ask how traditional religious services, which recognize the centrality of community to the development of an individual’s soul, could play a role in the emerging communities that may be naturally occurring at these spas for the soul? That question might just be – dare I say – very wise.