The Winners and Losers 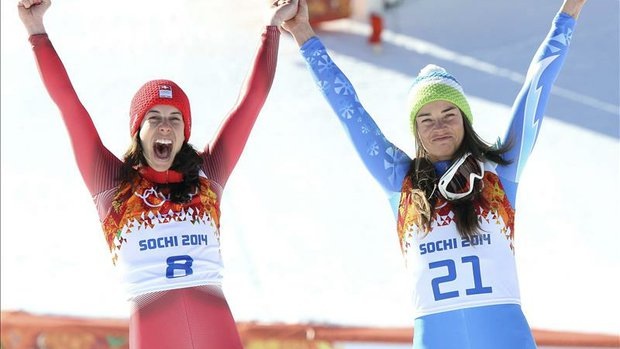 In the last Week in Wisdom I invited readers to compare two reactions to the unprecedented tie for the gold medal in the women’s downhill between Tina Maze of Slovenia and Dominique Gisin of Switzerland.

When Maze completed her run, Gisin came out of the leader’s box and into the finish area to give her a hug and was quoted as saying, “I’m sure glad I’m going to share this gold with Tina, she’s such a great woman and one of the greatest athletes of our sport.” Maze responded, “We will be linked together forever now. We’ll become better friends.” And they stepped up to the top of the podium holding hands.

But there was another reaction that received quite a bit of press. Picabo Street who won the Super G gold medal at the 1998 Games in Nagano by one-hundredth of a second offered the following commentary for Fox: “One one-hundredth of a second means more to me than whether I was the best skier on the mountain. It has more to do with the type of person I am and how I’m rewarded by the good Lord. He doesn’t bless people who are mean; he doesn’t reward people who are scrubs. I honestly think I was blessed with an Olympic gold medal because of the person I am.”

Street’s world view reflects a yearning that runs deep in our DNA. Whether in religious terms or not, we so want to believe we live in a moral universe in which we reap what we sow, we get our just desserts, and where justice ultimately wins. We teach our children that we live in a world in which being good is rewarded and being bad is punished, hoping that this way of seeing the world will help them live more ethically. But are “winners” by definition blessed for being good people? And do we really believe that “losing” is due to some moral failing?

In the last Olympics, Dominique Gisin’s downhill ended when she crashed off the final jump and endured a long slide to the finish line, where she hit a bank of snow, was tossed into the air, and sustained a concussion. Was Gisin’s fall in the last Olympics due to a character flaw she had? Did God (or the universe in the New Age versions of this theology) reward her in this Olympics with a tie for gold because she became a better person? And had Gisin just been a bit more ethical over the past few years would she have been blessed to be the sole gold medal winner?

We may wish the world was neat and tidy but at some point in our lives we find ourselves having to justify why good people often lose and suffer and why bad people win and prosper. At that moment, whatever theologies we make up to explain away our experience, a frightening and destabilizing truth seeps in: there may be no connection between our actions and our fate.

Touch a hot stove and we will burn our hand every time but the laws around acting ethically operate very differently. Doing the right thing is no guarantee of anything. The reward for being good is not measured in externalities whether medals, money, or long life and if we act virtuously, if we “serve” on the condition that we will be rewarded, we will at best be sorely disappointed by life and at worst, wind up giving up on being good.

The reward for doing good is ultimately in the act itself.

I can’t say you will be more successful or even happier if you do the right thing, after all, ignorance is bliss and very often doing the right thing entails difficult sacrifice. And while there is an internal, often subtle, feeling of pleasure which comes with doing the right thing that we can learn to savor and an eroding sense of self that some people experience doing the wrong thing over time, I have seen too many very good people have very difficult lives and plenty of nasty people have seemingly very successful lives to say our character and our fate are connected. But I can witness from over thirty years of sitting with people at the end of their lives that in the dearness of the vanishing moment, we know well what kind of people we have been. It isn’t? “Winning” and “Losing” that is a consequence of our character, rather our character is a consequence of how we deal with winning and losing.

Note: In a glass-enclosed timing booth perched at the top of the grandstand next to the finish, the times for Maze and Gisin were measured and recorded to the 10,000th of a second. But the rule is to report to the hundredths and so only the three person timing team knows who “really won” and they aren’t telling anyone.