Magic We Can All Perform: Transforming a Life 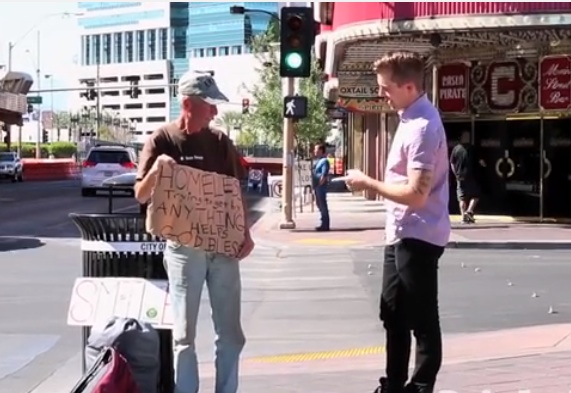 Over 4.9 million people have viewed Rob Anderson’s magic act in which he tears up a homeless man’s sign, only to put it back together with an extra surprise which he then gives to the gentleman. In a world of what often feels like endless competition for clicks and views, it’s easy to confuse success with making a difference. Sometimes though, virtual virality – nothing to sneeze at – opens the door to real world change.

Why this is so engaging to so many people is something we could debate and analyze all day. Perhaps it reminds us that we can all bring a smile to a stranger’s face, if we take the time to do so. Perhaps it allows us to feel good about the homeless being helped, without actually doing anything ourselves. Perhaps the video works, because it connects to the truth that it is always magical when you help another human being. My guess, is that it is a bit of all three. But whatever it is that made this video go viral, the story doesn’t end there.

…One thing is for sure – when we help others, we not only transform their lives, but our own as well.

This week, Rob Anderson is upping his act – taking it from popular street performance, to life changing activism. Having gotten to know Alan McCracken, Anderson has started a campaign to move beyond putting a smile on the homeless veteran’s face, to helping put him back on his feet.

Who knows what’s next, either for Anderson or for McCracken, but one thing is for sure – when we help others, we not only transform their lives, but our own as well. Just ask a street performer who has become a philanthrapist. Now THAT’S a cool magic trick – And it’s one we can all do!