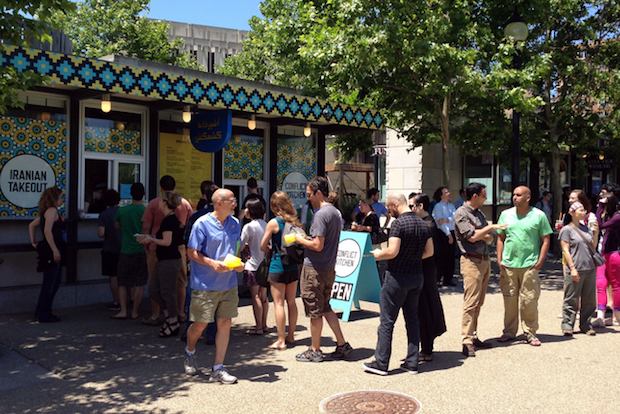 Do you realize how little we know about the countries with which we’re in conflict? Outside of the polarizing rhetoric of politicians and the narrow lens of media headlines, what do we know about countries we consider our enemies? An eatery in Pittsburgh has an innovative and savory way of addressing this.

Conflict Kitchen, a takeout restaurant opened by artists Jon Rubin and Dawn Weleski, only serves food from countries the United States is in conflict with. Operating seven days a week, the restaurant rotates its menu – and its design scheme – to reflect a different country every three months. So far, they’ve featured Venezuela, Afghanistan, Iran, and Cuba and now are offering Palestinian food, which, not surprisingly, is causing controversy.

Breaking bread with people is a well-practiced tradition as food makes all sorts of conversations easier to digest.

Each iteration of Conflict Kitchen is augmented by events, performances, and discussions that seek to stimulate diner’s engagement with the culture, politics, and issues at stake within the focus country. For example, there’s a weekly lunch with a speaker from the country, there are Skype video conference meals and conversations with people living in the country, and creative initiatives like inviting Iranians to write part of a speech they would like President Obama to deliver and hiring someone to give the speech.

And don’t throw out the packaging the food comes in, as the wrappers are covered with interviews of people living in the particular country so you can get their personal perspectives on politics and culture. Conflict Kitchen employees are a big part of the success. The chef is a star chef so the food is actually excellent. The employees get diners – some 300 a day come by – to stay and talk after they receive their food, and they help jumpstart conversations and debate about cultures and countries we only know as enemies.

It seems pretty clear that conventional diplomacy is always successful at peacemaking and that American citizens’ negative image of a lot of countries is based strictly on the leadership of the country, rather than its inhabitants. Any way to better inform ourselves about the people with whom we’re in conflict can only be for the better.

Breaking bread with people is a well-practiced tradition as food makes all sorts of conversations easier to digest. What do you think about an eatery where new cuisine from “enemy” countries can be enjoyed along with discourse on issues of conflict with those regions? Which country would you most like to learn about at the dinner table?