Learning To Find The Rightness In Being Wrong 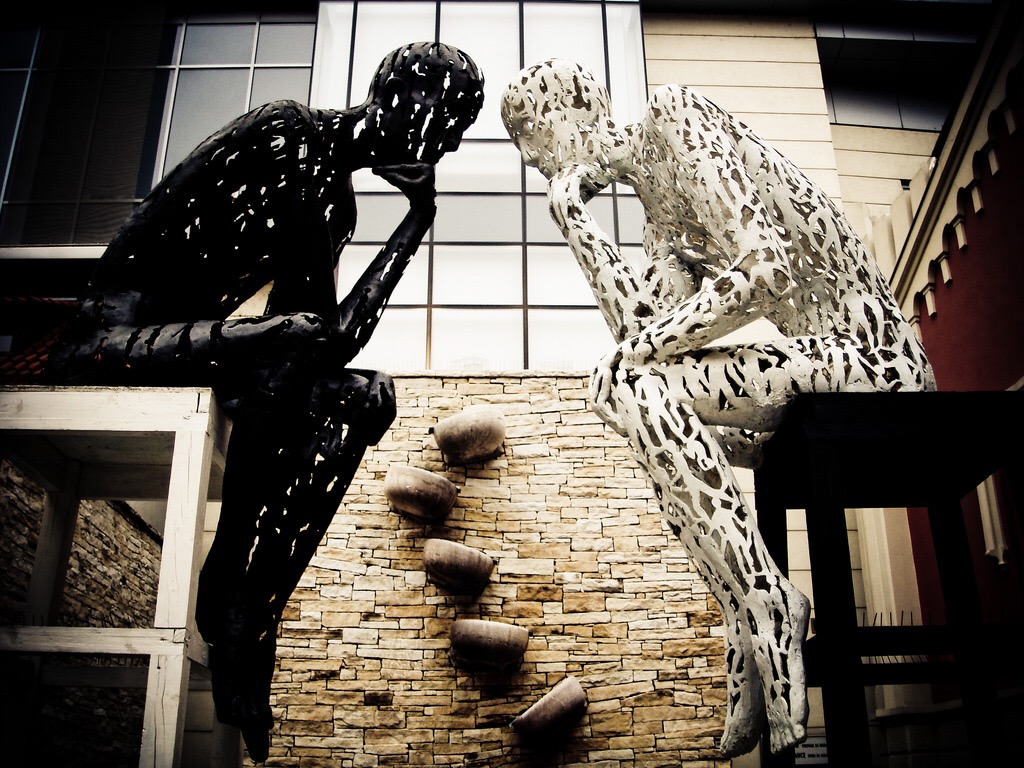 Growing up, I was known as a bit of an exaggerator. I was the girl who cried wolf, when what I’d really seen was a larger-than-average German Shepherd. In elementary school, stating interesting facts confidently seemed to make me a reliable source of information – I was smart, and I was sure of myself, and this (according to my memory, at least) made me more popular, not less.

But middle school is cruel to us all, girls in particular. Amongst the many other changes taking place in my life, I was tracked into “smart kid” classes. My peers were now just as smart as I was, and for the first time in my life, I was surrounded–not just encountering, but truly surrounded–by kids who disagreed with me and could back up their opinions. I had a fantastic memory, and often stated verbatim things that I heard on talk radio in my parents’ car, or read in back issues of The New Yorker that were piled in our bathroom at home. But what twelve-year-old (and thirteen-, and fourteen-, and honestly nineteen-year-old) me was sorely lacking was a set of critical reading skills to match my memory. Other things I quoted verbatim were:

As you might have already guessed, my habit didn’t impress my new group of uber-intelligent friends. Throughout middle and high school, I noticed myself becoming a less credible source of information. I still was seen as smart, but also overly dramatic (yes) and a bit of an attention-seeker (also yes). I know this from a mixture of 1) insults hurled in fights, 2) finding out what my friends said behind my back, and 3) an anonymous commenting box that the creators of MySpace (dating myself) seemed to think was a useful feature at the time. To complicate matters, I didn’t understand why something being outrageous was cause for skepticism–of course it was outrageous! That’s why I’d told them! What was the point of bringing up a fact that everyone already knew? Weren’t they more interested in learning about the dog food industry from information I had memorized from a PETA brochure?

Towards my later high school years, Facebook replaced MySpace as the preferred social network and I became much more politically active. By the time I entered college, my Facebook page was overtaken with campaign slogans and interesting reports, and I often entered into arguments with people in online forums. I became very good at finding and citing sources, which made me much better at winning arguments (both online and in-person.) Three years of working with Amnesty International taught me that it wasn’t sufficient to prove to your opponent that you were smarter and/or more well-informed, and therefore should be taken seriously. You had to actually listen to what he or she had to say if you wanted to change hearts and minds.

There was, however, a skill that I was steadily becoming worse at. I have never been good at being wrong. I have chosen so many hills to die on, that I’m afraid there aren’t many left. Even when I argued with people and “listened” to what they had to say, I wasn’t listening because I thought they might be right. I was listening because that was the best way to find a flaw in their argument.

Even though I’ve been aware of this character defect in myself for a while, I’ve had trouble addressing it. Those friends and family members close enough to feel comfortable being honest (occasionally with the impetus of a screaming fight) admitted to me that I was often abrasive, dismissive, and a bit of a know-it-all when it came to almost everything. Combined with my history of social anxiety and a fear that none of my friends really liked me, the realization that I was not, in fact, a perfect person, was borderline devastating.

But how do you stop yourself from always believing that you’re right? Maybe most people won’t admit it, but doesn’t everyone think that people who disagree with them are just wrong? As the saying goes, “If you don’t stand for something, you’ll fall for anything.” I had to make a change, though–my previous practice of researching an opinion and then picking the one that mades the most sense, tattooing it onto my identity, and evangelizing anyone who was standing still was clearly not working for me. The first step to improving ourselves is acknowledging our imperfections, and my inability to accept that someone else could be right, could even be more right, has certainly been one of my biggest flaws.

Over time, I have become better at noticing my friends’ discomfort during our arguments, and I finally understand why certain people have always annoyed the crap out of me. I am simply noticing in them the same attributes I secretly hate in myself–an unwillingness to listen, a tendency to make dismissive and unintentionally hurtful statements, and an unwavering belief in their own rightness.

In the past month my husband and I moved to a brand new community, and are in the process of building a circle of friends. Before we moved, I made a commitment to begin actively adjusting my own behavior- to be kinder, less aggressive, and to embrace being wrong when it happens (as it does to all of us.) It’s not easy. I’ve become aware of the fact that I have a large, starving ego, and when people notice that I’m smart or well-informed, I notice them noticing. The urge to spout off “I read that…”s  and “Well, actually…”s becomes almost unbearable. Not surprisingly, my giant ego is accompanied by a crippling insecurity, so that I have now spent hours over-analyzing conversations for signs that I was too much of a know-it-all or talked too much.

We aren’t stuck with our own bad habits–we do have the ability to change. I think (though I could be wrong) that I’m not alone in my struggle, and I’m here to offer you my hard-won lesson: even if you’re a person who is “right” most of the time, it’s not necessarily constructive to your friendships or to your growth as a person to assume your rightness, or to enforce your rightness. I am working harder at being wrong, and it is my unwavering opinion that you should, too.