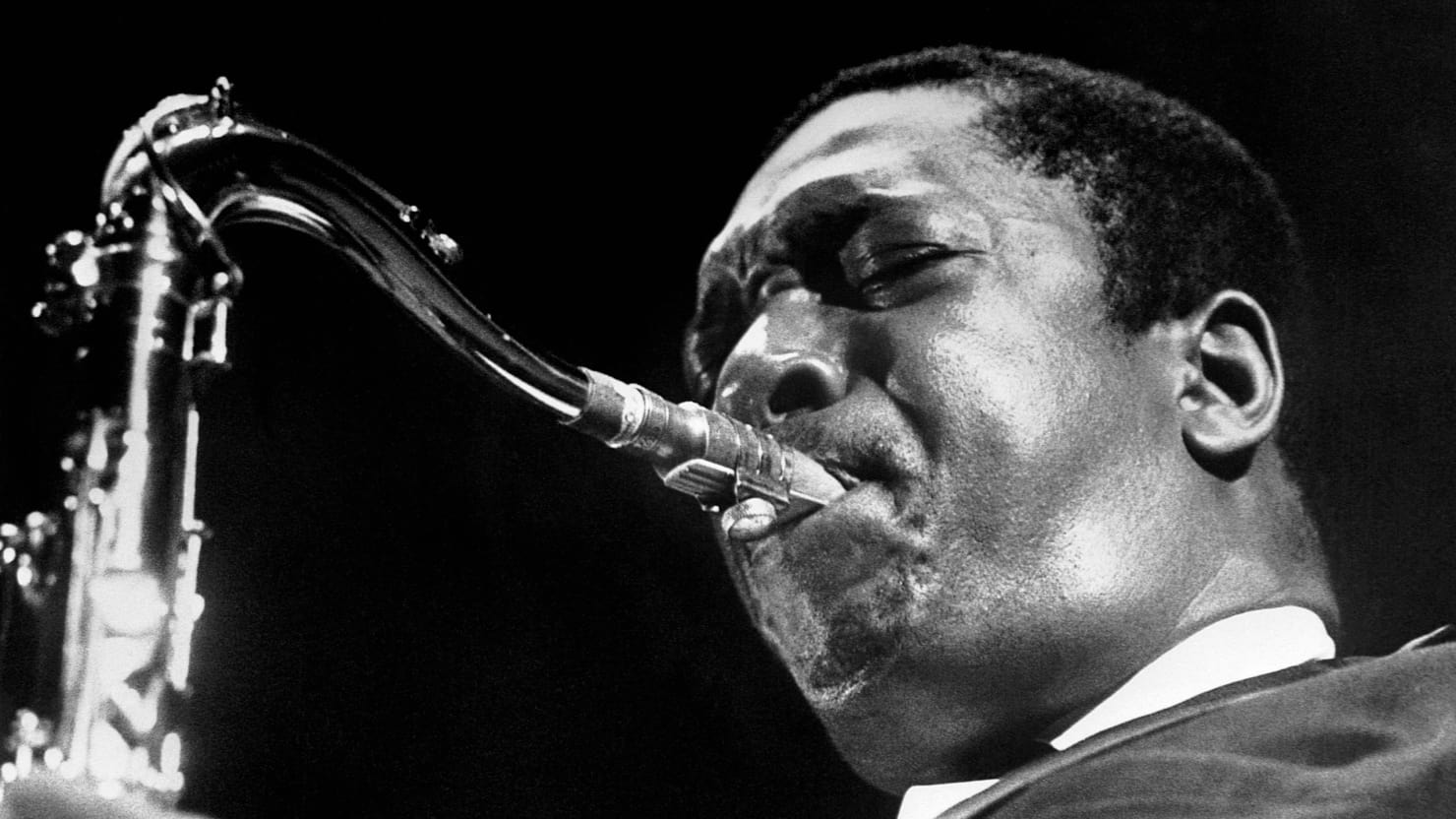 God breathes through us so completely… so gently we hardly feel it… yet, it is our everything.

As I write this, “Both Directions At Once” a newly released lost John Coltrane album from 1963, just dropped on Spotify. It’s named after Coltrane’s famous comment that he played like someone “starting a sentence in the middle, and then going to the beginning and the end of it at the same time … both directions at once.”

What Van Gogh or Picasso or Monet were to painting, Coltrane was to music. Some might say “to jazz”, but because his relevance is not just limited to a genre (great as the jazz tradition is), speaking that way might unintentionally belittle him. Van Gogh was an oil-based painter in the post-impressionist European tradition, but we usually just call him a “great artist.” He belongs to the whole world- he accomplished something human.

Coltrane too was such a “great artist”- practicing in the medium of sound, not vision- creating forms of beauty, emotion, harmony, dissonance, and transcendence, which had never been heard before and, not only were unthought of before him, but are difficult to imitate after him.

It is not just for his music that Coltrane is fascinating, but for his successful battle with the scourging addictions that wounded or felled other jazz talents of his time, and for his spiritual consciousness, courage, and bold adventurousness. He was also an eminently philosophical musician whose work came to express a spiritual vision.

Coltrane was born in 1926, the same year as Miles Davis, the other jazz titan of the time and the person who did more than anyone else to put Coltrane’s name on the map. In the 40s and 50s, Coltrane was a solid, competent saxophonist called upon to play with rising greats, most notably with Davis, while he found his own voice. That voice was almost silenced by addiction, however, as he struggled with heroin use and binge drinking. In 1957, Coltrane was fired from Miles Davis’ band for showing up disheveled, smashed out of his mind and barely able to play.

Coltrane set his mind to getting clean and getting himself together, and once free from his chemical demons, Coltrane began the career of the man we now think of when we think of “John Coltrane.” In the 1964 liner notes to his album, A Love Supreme, considered one of the greatest jazz albums ever recorded, Coltrane wrote:

During the year 1957, I experienced, by the grace of God, a spiritual awakening which was to lead me to a richer, fuller, more productive life. At that time, in gratitude, I humbly asked to be given the means and privilege to make others happy through music. I feel this has been granted through His grace. ALL PRAISE TO GOD.

The realization Coltrane was trying to articulate is explained in the liner notes: NO MATTER WHAT … IT IS WITH GOD. HE IS GRACIOUS AND MERCIFUL. HIS WAY IS IN LOVE, THROUGH WHICH WE ALL ARE. IT IS TRULY – A LOVE SUPREME – .

Highlighting the spiritual message of the album, toward the end of part one, “Acknowledgement,” Coltrane plays the same melodic riff in every key. Lewis Porter, the head of the master’s program in jazz history and research at Rutgers University-Newark, told NPR that “Coltrane’s more or less finished his improvisation, and he just starts playing the ‘Love Supreme’ motif, but he changes the key another time, another time, another time. This is something very unusual… he ends up playing this little ‘Love Supreme’ theme in all 12 possible keys,” says Porter. “To me, he’s giving you a message here. First of all, he’s introduced the idea. He’s experimented with it. He’s improvised with it with great intensity. Now he’s saying it’s everywhere. It’s in all 12 keys. Anywhere you look, you’re going to find this ‘Love Supreme.'”

A Love Supreme was recorded in one day, the music coming together with little direction from Coltrane as the intimate group of seasoned musicians played together. It is the hinge between Coltrane’s more accessible work between 1957 and 1964, and the sonically fearless and no-holds-barred experimental work that followed.

Albums like Coltrane (1957), and Soultrane (1958), released after he freed himself from his under-the-wagon years, showed him possessed of a distinct voice and virtuosic talent. Giant Steps (1960) and My Favorite Things (1961) showed constant evolution as Coltrane developed incredible melodic depth and pushed his soloing into more and more experimental realms. As music critic Mark Richardson wrote of that period, “He wasn’t just covering ground, he was accelerating.”

Coltrane became known for his “sheets of sound” style, releasing lightning fast cascades of notes as he played through, over and around the sonic structures of the piece. His soloing sounds like a spirit bird canvassing the chords, trying out every possibility of note, looking for a way to escape the structure and soar free. Atonal, dissonant, and shrieking sounds would begin to pour out of Coltrane’s horn more and more as he looked for a way to play himself right out of the world, dragging the music, sometimes literally kicking and screaming, behind him.

A Love Supreme, which has sold more than a million copies and is the second most popular jazz album of all time, showcases such incredible passages of saxophone flight amidst soundscapes of great sweetness, depth, and wonder. The concept of the album had arrived in Coltrane’s mind as an intuitive whole one morning while meditating. As he moved into more challenging territory musically, he was also pushing past more commonplace spiritual boundaries in America to explore Buddhism, Hinduism and new age thought. “I believe in all religions,” Coltrane said. “The truth itself doesn’t have any name on it to me, and each man has to find it for himself.”

Coltrane’s spiritual trajectory was heavily influenced by his second wife, Alice, who he met in 1962. Alice and John married in 1965 after Coltrane officially divorced his first wife Naima, who was the inspiration for the famous track named after her on Giant Steps. Naima and Coltrane remained friends until his death. Coltrane met Alice in 1962 and they married in 1965. After Coltrane’s death in 1967, Alice became a swamini (female swami) and opened a Vedantic ashram, dedicating the rest of her life to teaching and priestly duties as well as music.

Between 1964 and 1967, Coltrane released experimental albums like Meditations, Ascension, and Om where he largely abandoned traditional musical structures and tonality. He also worked on the stunning Interstellar Space, a duet with drummer Rashied Ali which wasn’t released until after his death. The soaring emotionality and fierce, transgressive playing on these albums would inspire decades of avant-garde musicians.

“There is never any end,” Coltrane wrote in the 1965 liner notes for Ascension. “There are always new sounds to imagine: new feelings to get at. And always, there is a need to keep purifying these feelings and sounds so that we can really see what we’ve discovered in its pure state. So that we can see more clearly what we are. In that way, we can give to those who listen, the essence–the best of what we are. But to do that at each stage, we have to keep on cleaning the mirror.”

“Once you become aware of this force for unity in life,” wrote Coltrane in the liner notes for 1965’s Meditations,”You can’t forget it. It becomes part of everything you do… my goal in meditating on this through music however remains… to uplift people as much as I can. To inspire them to realize more and more their capacities for living meaningful lives.”

What is striking about Coltrane is not just his modeling of rebirth after catastrophe and his years of soaring into new spiritual and musical skies, relentlessly going beyond what most people would understand or consider “safe.” It’s his belief, as shown in the quote above, that in doing so he is uplifting people and inspiring them to “realize more and more their capacities for living meaningful lives.”

Coltrane is sharing his own ascension. He is inviting the listener into the joyful, chaotic collaborations of his later albums, where the horns sound more like birds coming together in wild flight than hip, controlled improvisations. His albums sound at once like the travel journal of a mountaineer and like a model for free community.

Speaking about the relationship Coltrane saw between his music and what was happening in the world of the mid- 1960s, so marked by social change, racial strife, and burgeoning liberation movements, Coltrane told Frank Kofsky in a rare interview from 1966,  “Well, I think that music, being expression of the human heart or the human being itself, does express just what is happening. The whole of human experience at that particular time is being expressed. In any situation that we find in our lives, when there’s something we feel should be better, we must exert effort to try and make it better. So it’s the same socially, musically, politically, in any department of your life. I think music is an instrument. It can create the initial thought pattern that can create a change, you see, in the thinking of the people. I mean I want to be a force for real good. In other words, I know that there are bad forces. I know that there are forces out here that bring suffering to others and misery to the world, but I want to be the opposite force. I want to be the force which is truly for good.”

In his fierce modeling, through his life and music, of his heartfelt quest for both personal and collaborative freedom, Coltrane is an artist who still points the way.