God at the Grammys 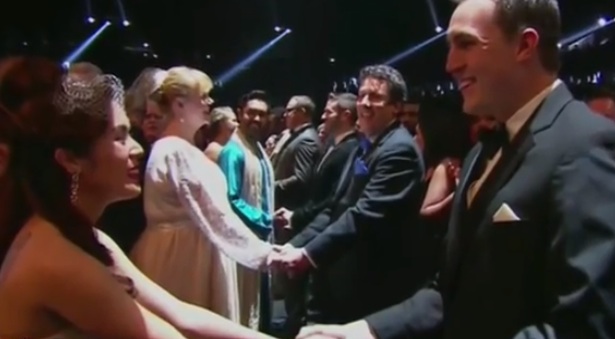 In 2012, after much pre-show debate about the wisdom of mixing God with the Grammys, LL Cool J opened the Grammys with a prayer that seared heart and soul as he offered comfort in the face of Whitney Houston’s tragic death the day before. The emotional highlight of this year’s Grammys was also a religious moment.

Whether you were one of the 27 million people who watched or not, by now you have surely heard about the group wedding in which 34 couples gay and straight and of various ages and ethnicities exchanged rings and said, “I Do” in a marriage ceremony led by Queen Latifah.? The actress/rapper/talk show host was deputized by Los Angeles County to legally conduct wedding ceremonies and she signed the certificates of each couple.? The rite of passage took place during a performance by hip-hop duo Macklemore & Ryan Lewis of their hit song ‘Same Love’, a plea for equal rights that has become an anthem in the gay community. Joining them was Madonna, an early adopter of taking control and re-layering the meanings of religious symbols and iconography, who performed a slowed down version of her own classic “Open Your Heart”.

As a religious leader I couldn’t help but marvel how this sacred moment – actually it lasted fifteen minutes, by far the longest segment of the more than three hour show – reflects the changes in the way Americans are increasingly doing religion these days. There were no ministers or religious authorities and there was no creed or dogma?- in fact, did you know that 27% of all funerals in this country are held with no religious authorities?? There was no overt God in the sky commanding and judging either for good or bad.? But neither was this soulless secularity or simply a neutral, justice of the peace, state-sanctioned ceremony.

In fact, I would call it an expression of holy secularity. At 11:05, just minutes after prime time (surely not accidental) the stage which moments earlier was a secular center of popular culture was transformed into a chapel-like sacred space with stained glass windows, a traditionally robed choir, a radiant wedding officiant, dressed in black offering both wisdom and vows who, feeling the weightiness of the moment wanted, in her own words,”to make sure to do it right”, and celebrity soloists singing a hip-hop hymn, to which everyone knew the words, describing the life-long commitment and journey of a same sex couple declaring:? “Whatever god you believe in/We come from the same one.”

This was religion for the fastest growing religious identity in America – “None” – and for the 80% of those under the age of 32 who have no problems with marriage across any lines – sexual, racial, religious or ethnic.? This was spirituality customized for the context. It transcended ethnic, theological, and the many other tribal boundaries that are so much a part of institutional and organized religion. Non-experts conducted the ceremony using popular culture and religious imagery disconnected from any particular religion or metaphysics to evoke emotion, create community and make the sacred accessible and usable for people who themselves are mixing and blending, bending and switching identities.

I know the critique offered by religious leadership of this spirituality: it lacks depth, it is pandering and dilutive and where is community. But the question isn’t how does this compare to the religion of the cathedral, to “the tradition” but whether it is good enough to get the job done?

What is the job of religion? All I can say is that tears of joy, wonder, awe, empathy, amazement, and grace flowed from the couples, from the audience, and no doubt from people like me sitting in living rooms across this country. We felt a palpable and profound sense overflowing the Nokia Theater that hope, compassion, and love can win out over ideology, fear of the unknown and difference, and the hold of tradition itself. The job of enchantment was done.

Ironically or perhaps wisely the Grammys also had Merle Haggard, Kris Kristofferson, and Blake Shelton singing Haggard’s “Okie From Muskogee”, which remains for many the defining “traditional values” anthem of the 1960s.

We are all learning the dance of holding on and letting go, of innovating and traditioning to the music that never stops.? Congratulations to the 34 couples!