After The Pittsburgh Shooting, I Feel Like A Target 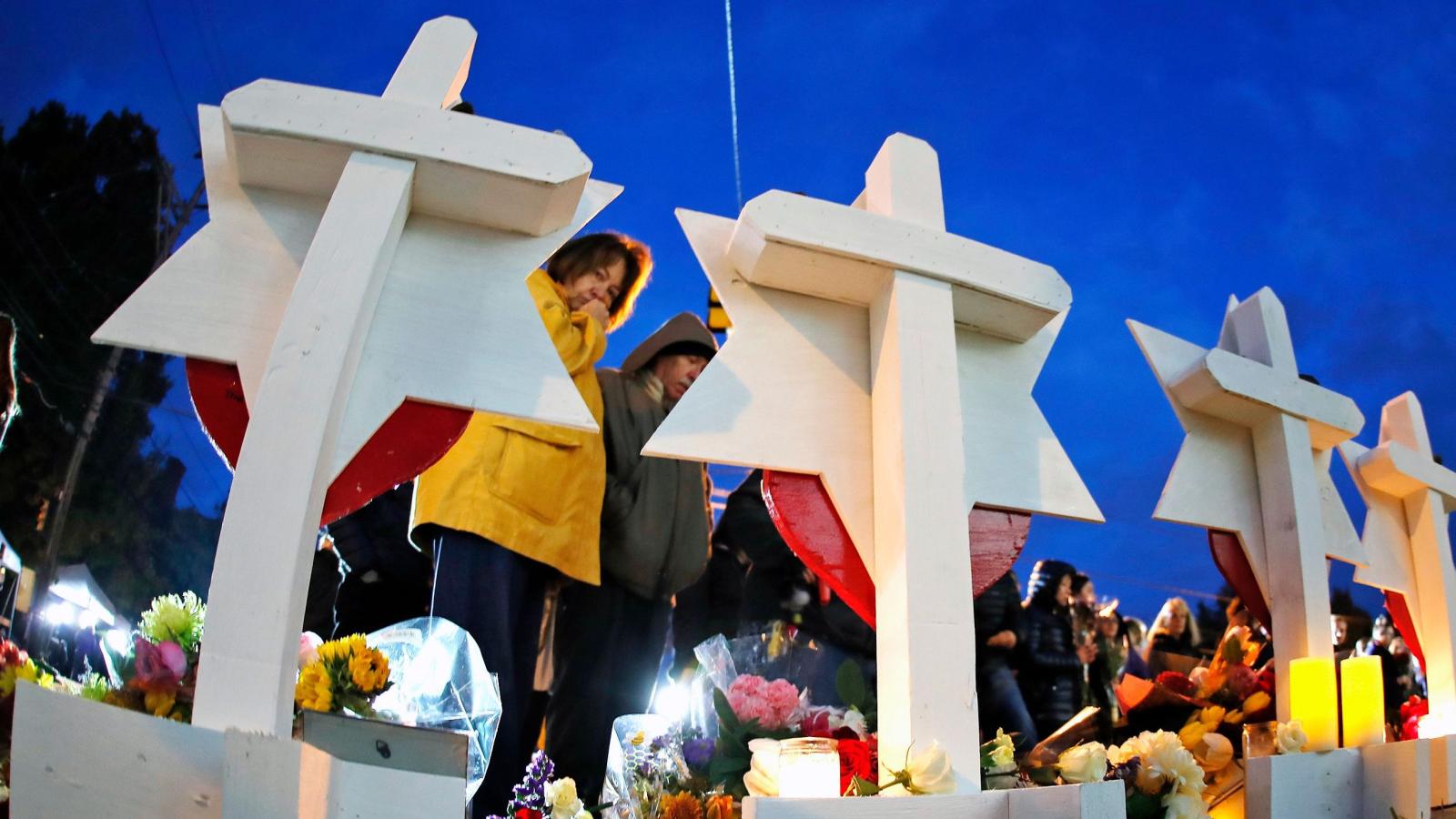 The day after the shooting in Pittsburgh, I walked into Starbucks, intent on settling down with my laptop to get some work done despite the overwhelming distraction of mourning 11 of my fellow Jews who were just murdered in their synagogue two hours away from where I live.

I looked around at my fellow patrons, determined not to view them with suspicion, but unable to keep from wondering. I wondered whether they noticed me, whether they realized I’m Jewish like those tragic victims in Pittsburgh yesterday. Usually unaware of the scarf on my own head, that day I felt marked, standing out like a sore thumb. “Sore” is an understatement for how I felt that day, and I wondered whether the people around me knew, just by looking at me, how I might have been affected by a mass murder that might not look like it had anything to do with me. I wondered where their sympathies lay, whether they saw me as I am, or whether, like Mr. Bowers, they saw me as some sort of a threat.

At the height of the police shootings that led to the Black Lives Matter movement, I felt conspicuous as a privileged white person and kept looking for ways to show the black people I encountered that I was on their side, that I saw them simply as humans and was horrified at the loss of innocent lives. Lacking the confidence to actually say anything to anyone, I satisfied myself with making a point of smiling and nodding at any person of color I passed; walking into a Starbucks, I would make a point of holding the door open for any black customers coming in at the same time. I knew it wasn’t much, and even felt a little silly, but I hoped it was worth something.

After Pittsburgh, I didn’t feel as much like a privileged white person. For the first time in my privileged little life, I felt conspicuous in my own status as a minority. I looked around me in Starbucks that day hoping for those random smiles and nods that would tell me I have friends.

I refuse to view my fellow humans with unfounded suspicion, but raised on Holocaust history and the cry “Never again!” my mind can’t help idly wondering – if it came down to it, would that guy over there shoot me or would he hide me? What about that woman; if my children were cowering in terror and she heard an errant cry, would she turn us in?

I don’t even have Holocaust survivors in my family, to have trained me to think that way; I’m so firmly American that several of my great-grandparents were born here. But this is how we begin to think, when we begin to feel the threat of those who have irrationally decided that Jews in America pose some sort of a threat.

Funny; I don’t feel like a threat. But I’m starting to feel threatened.

I cherish the email a non-Jewish friend sent when she heard about Pittsburgh. “We’re grieving with you. How are you doing?” I tell myself she would hide my family, if America ever came to that.

I tell myself to stop thinking like that, and myself asks me how I can possibly stop.

A week later, I’m getting on a plane. I used to fly frequently, but it’s been a while, and I’m newly aware of the need for all that security. I bag up my liquids without complaint, smile and thank the TSA agent, grit my teeth and pose for the machine I despise but that will, I hope, catch anyone who might be a true threat and reassure us those of us who make it through that we don’t need to fear each other.

I make a point of smiling and nodding at anyone whose eye I can catch – no longer to show them I don’t think they’re a threat, but in the hope they won’t see me as one. As if all the smiles in the world could counter irrational prejudice and hatred, once it’s taken root.

A woman asks me to watch her bag while she goes to the bathroom. Twenty years ago, when I flew all the time, I would have agreed without question. But too much has happened since then, and I hesitate. “You’re probably better off taking it with you,” I say. Not wanting her to think I actually suspect her of anything, I shift the blame to protocol. “If anyone comes and asks… Probably better if you take it.”

Do I really think she’s a danger, that her bag contains some sort of weapon she managed to get past security?

Does she, perhaps, now view me with suspicion because I wouldn’t do her that one kindness? Did she walk away thinking, “Oh, those Jews, unwilling to help someone who’s not their kind!”

It’s a risk I have to take, because I have to consider the risks if I don’t. But it frightens me.

I settle into my seat on the plane and pull out my crocheting. I checked before packing, to make sure my little crochet hook was allowed on the plane. It’s not much of a weapon, but sharp enough that I warn my kids away from it, and I can’t help wondering whether it will make the people around me nervous. Will they wonder whether my needlework is just a cover for some nefarious plot involving that little piece of metal? I start crocheting furiously, to show my intentions are innocent; I really do just want to crochet with it.

I can’t help wondering, too, whether it’s sharp enough to use for self-defense.

Do my fellow passengers see me as a threat, because of the scarf on my head or simply the Jewish blood in my veins? Should I consider them as potential threats, keep my crochet hook at the ready, because maybe someone among them agrees, inexplicably, with Mr. Bowers?

This is how we start to think.

And what is it that I’m crocheting? Yarmulkes for a bar mitzvah; matching Jewish head coverings for twin boys who will soon celebrate their growth into Jewish men. And I wonder, as I work, whether they are like me at their age, beginning to learn the horrifying elements of their history, but secure in the knowledge that they’re safe here in America – or whether they are afraid like our ancestors, wondering who their real friends are. Afraid like I am now.

I felt silly when I made a point of smiling at black people in Starbucks just because they were black, but now I look for those smiles from others. I look for every burst of friendliness that tells me my scarf and my blood don’t matter, that there are people – most people, enough people to overcome the others – who see Jews like me simply as humans, people who are as horrified as we are at the loss of innocent lives.

And I decide my crochet hook really is a weapon, but not that kind. It’s a weapon I pray will prove mightier than any sword, any firearm, any bewildering propaganda that makes my people out to be something we’re not. It’s the weapon with which I will continue to create those symbols of Jewish pride. As I crochet, I’m fighting for my right, and the rights of all, to walk the streets with scarves, yarmulkes, any covering or no covering. Our rights to live and smile and embrace each other regardless of whose blood flows through our veins. Our rights to live in this country with pride in who we are, and to never have to hide.