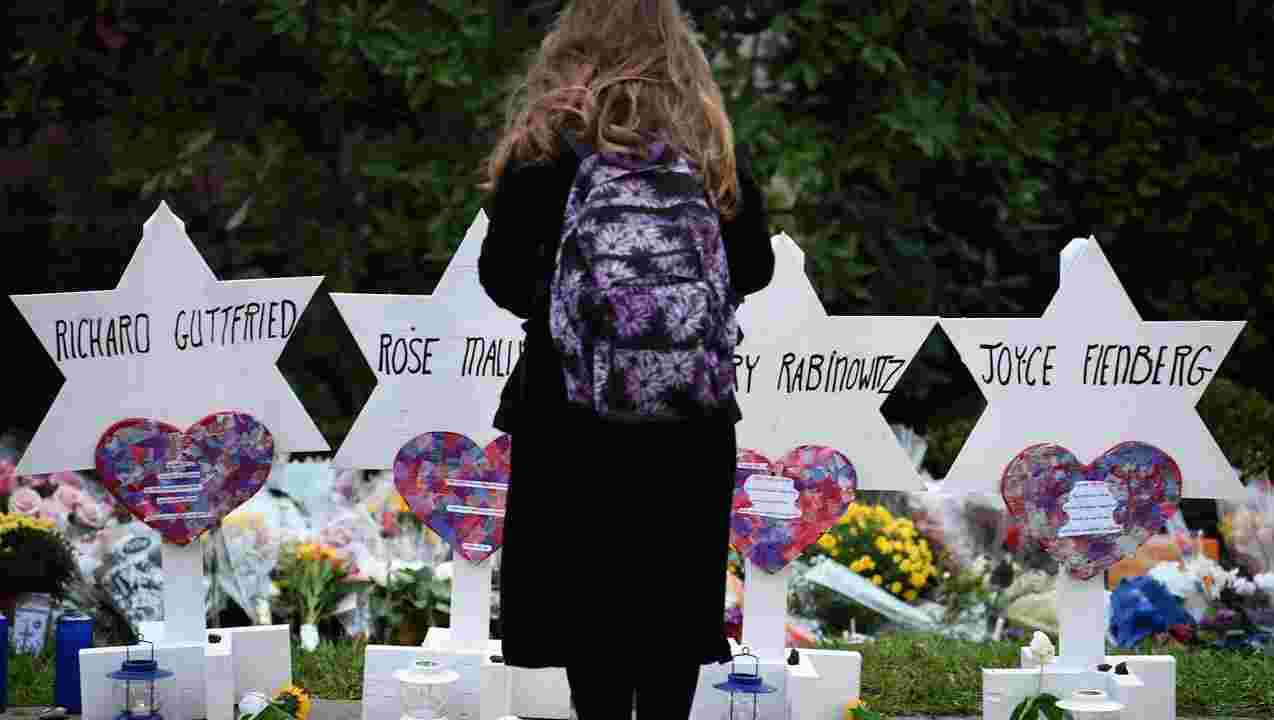 The Rabbi took the policeman’s head in his hands and blessed him.

Rabbi Avi Weiss is a Kohen, a descendant of the sons of Aaron who served as priests in the Temple in Jerusalem. The policeman served in the Squirrel Hill precinct.

May God bless you and keep you. May God shine his face upon you and be gracious to you. May God turn his face toward you and give you peace.
Numbers 6:22-27

The fifty person delegation from Ohev Sholom in Washington, DC stood facing the holy ark at Poale Zedeck synagogue in Squirrel Hill, three days after eleven Jews lost their lives while praying for peace on a Sabbath morning.

“Thank you for your protection. Your bravery. Putting yourself in harm’s way to save a life. Many lives, ” the Rabbi continued.

Policemen, security guards, SWAT teams and first responders were our Protectors on that Shabbat. They heard our screams and did not hesitate to act.

Pittsburgh police Chief Scott Schubert was quoted as saying that without the speedy arrival of officers – and their willingness to charge into an active situation – the scale of the massacre would have been much larger.

“Watching those officers run into the danger to remove people – to get them to safety – was unbelievable,” the Chief said.

Our burst of applause stunned the veteran police officer.

“I am the one who should thank you for providing us with food, hugs and gratitude.”

Next, a member from the Poale Zedeck congregation spoke to us. “You are sitting in the seats we sat in last Shabbat, over 200 hundred men, women, and children, waiting and wondering and praying. We did not know how long we would need to wait until we were given the signal to leave and go home. What if the shooter had chosen to come to our synagogue that morning?”

My parents and grandparents fled Poland because of the relentless pogroms against the Jews in towns across Eastern Europe. A Pogrom is an organized and deliberate massacre of a particular ethnic group. Was this not a pogrom?

During our six hours in Squirrel Hill, we recited Kaddish five times. We went to one funeral where two caskets for the “brothers”, David and Cecil Rosenthal flanked the bima. We surrounded the hearses and chanted Hebrew verses before the procession to the cemetery began.

We then walked a mile and a half to the Tree of Life synagogue where we bore witness to the horror. We continued to chant and comfort the residents who formed a ring around us. We walked another mile through the streets of Mr. Rogers’ neighborhood to reach the Poale Zedeck synagogue where the Rabbi blessed the police officer.

And, again, we bore witness.

A graduate of the Academy for Jewish Religion in New York, Rabbi Miller is a multi-denominational rabbi in the Washington DC Metro area. Her private rabbinic services include chaplaincy work, life cycle events, teaching and speaking. She is the author of You are the Book, A Spiritual Memoir and the weekly blog, Spiritualetters. She is an alumna of the initial Rabbis Without Borders cohort. Find her at RabbiTamara.com.