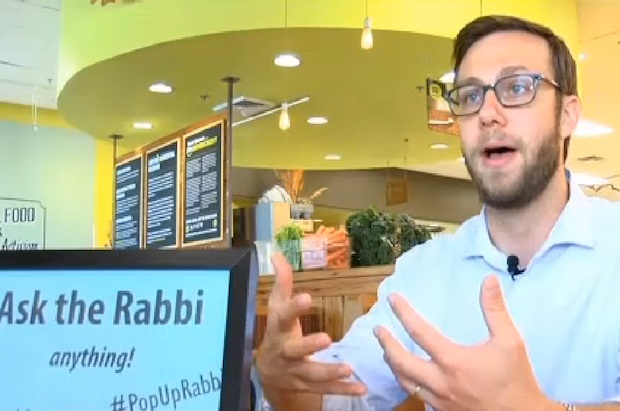 A few weeks back I wrote about how exciting and unnerving it is that, according to a new Pew Report on religion,?institutional religion in America is clearly weakening.?With people mixing, blending and bending their identities – and with spiritual resources increasingly accessible independent of religious institutions and authorities – there are now more Americans religiously unaffiliated than there are members of any denomination!

In other words, America’s largest religion is None (or unaffiliated). I suggested that in religion, just as in so many arenas like health, education, music and media, we’re on the cusp of an explosion of innovative new products, services and delivery systems. As an example, you’ve probably heard of pop-up retail stores in many cities. Well, here’s a “Pop-up Rabbi.”

A rabbi at a traditional (though obviously creative) brick-and-mortar synagogue in Richmond, Va., Michael Knopf is disrupting his own institutional business model. He’s delivering Jewish wisdom and spiritual conversations with no barriers of access – or what the late Al Taubman, legendary inventor of the modern mall, called “threshold resistance,” referring to the physical/psychological barriers that stand between a shopper and the inside of a store, or in this case, between seekers of Jewish wisdom and the storehouse.

In the fascinating news report below, watch this Pop-up Rabbi in action at a local cafe. Notice how he describes what he’s doing – how he emphasizes listening over prescribing, how he’s literally where people are and starts with what people actually need, rather than with what he as the “religious authority” thinks must be preserved from his tradition (or what he believes people need to think or do to make them good Jews).

And notice what the correspondent observes about this initiative – its personal quality, its simple message of love, and the accessibility of Knopf’s wisdom to more than just Jews. What do you think the shoppers who sat down with him felt, and told their families later at the dinner table, about their experience meeting him?

One of the most interesting things about this Jewish wisdom “pop-up retail” is that, unlike religious authorities in most institutional religion, Knopf isn’t obsessed with membership, with controlling the outcome or making people in his image. He cares about offering people wisdom aligned with what they need in the moment, hoping to serve them on their particular journey.

This rabbi is a disruptive religious innovator: leaving the walls of the cathedral and entering the bazaar, surprising people in a planned/spontaneous experience, and making his “product” (Jewish wisdom) more accessible, usable and less expensive than incumbents – and, apparently, good enough to get at least some part of the job of religion done.

A Pop-up Rabbi for a couple of hours a week, Michael Knopf is a genuine Rabbi Without Borders. He has created a frictionless delivery system of wisdom, in order to help anyone – across all backgrounds and inheritances – to flourish. Stay tuned: In the near future, The Wisdom Daily will check back with this innovator about how things are going.