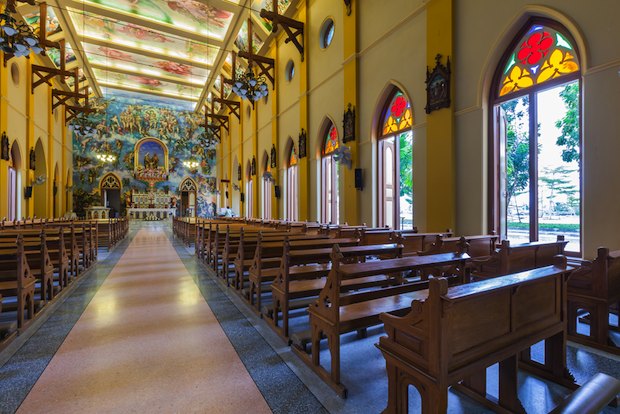 The trend continues: According to a large survey conducted last year by Pew Research, Christianity is on the decline in America across every race, gender, age, education level and geographic region. The percentage of adults who describe themselves as Christians dropped by nearly eight percentage points in just seven years (2007-2014) to about 71 percent.

At the same time, as reported in Pew’s survey results, the share of those who are not affiliated with a religion has jumped from 16 percent to about 23 percent, with millennials becoming even less affiliated with religion as they get older: 34 percent are now considered “Nones.” Today, there are more religiously unaffiliated Americans than there are Catholic Americans or mainline Protestant Americans.

It will be a rocky transition from depending on the habit of religion to taking responsibility for being reflective practitioners of life.

How exciting – institutional religion with metaphysical maps, theologies, creeds, dogmas, and beliefs (that are simply wrong scientifically, philosophically, psychologically, and experientially) is weakening, as individuals feel more empowered to seek meaning and purpose across all boundaries.

Technology, demographic changes and globalization are all challenging our legacy industries and institutions – from newspapers to universities, from taxi commissions to health systems, not to mention publishing, hotels, music and movies…. And now religion.

Transitions are scary, and for those among us for whom traditional religion is a foundation, this will be difficult. But we’re on the cusp of an explosion of innovative new ways?for people to form identities, webs of relationships, and communities. We will now find new/old ways to do the job religion historically claimed it did – to console one another in times of loss, to mitigate suffering, to help us overcome the darkest parts of who we are, to transform strangers into friends, to nurture our qualities of compassion, awe, wonder, justice, empathy, humility, generosity, resilience, hope, gratitude, accountability, forgiveness, enchantment and love.

The products and services (the wisdom and practices of religion) will increasingly be dis-intermediated/separated from their institutional settings and authorities as we mix, blend, and bend them in a process of sacred retrieval and recovery, into new spiritual alchemies. No doubt, it will be a rocky ride as we transition from depending on the habit of religion to taking responsibility for being reflective practitioners of life – awakened to our own and to other’s flourishing.

It’s not often one gets to live in a moment of re-imagining our humanity!

For more on the exciting future of religions as they innovate and adapt, watch this dynamic speech by Irwin Kula here: What Age-Old Religions Gain From New Ideas.