Nathan Englander’s New Book Hearkens Back To His Religious Roots 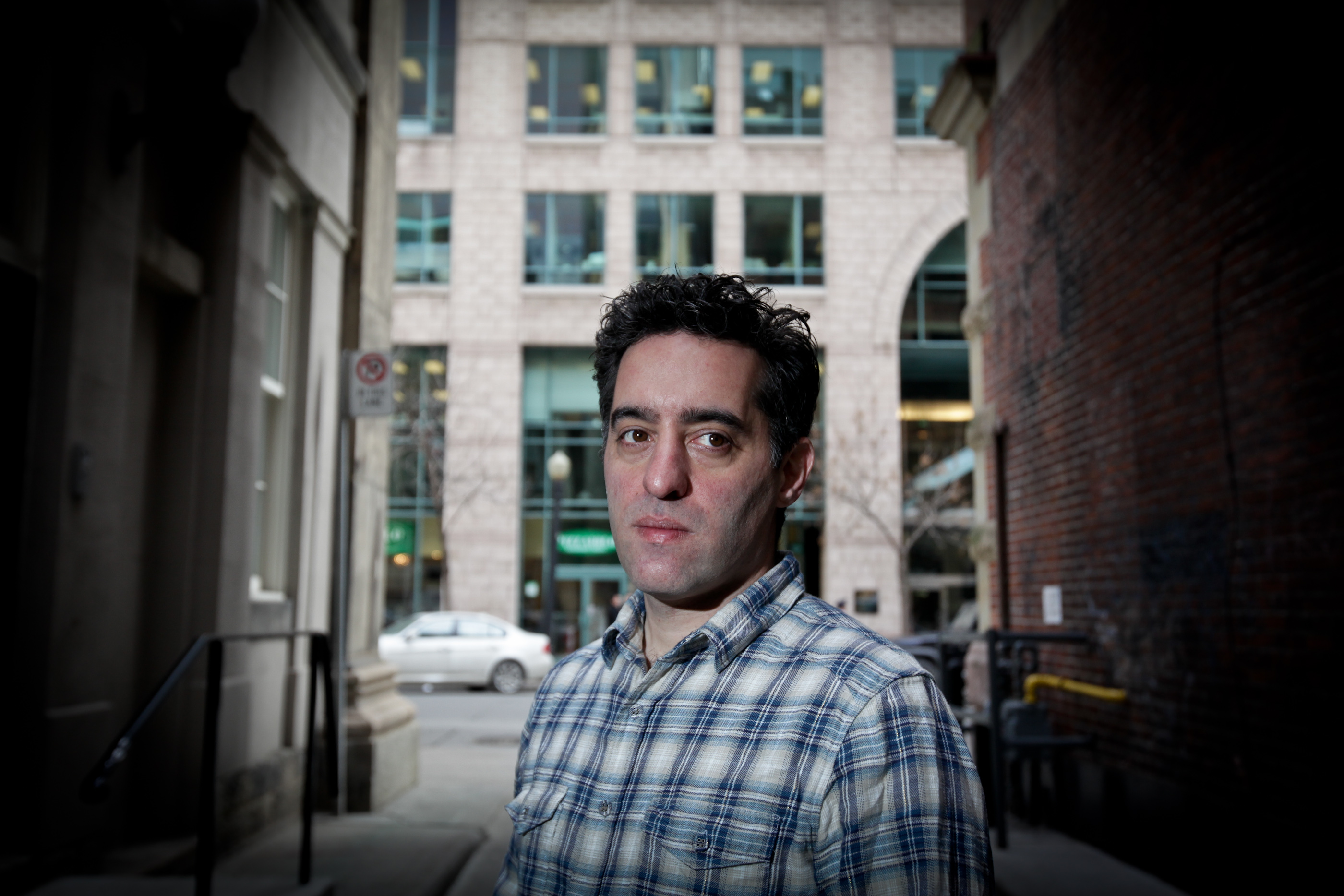 First, a confession.  When Nathan Englander’s first book of short stories, For the Relief of Unbearable Urges came out in 1996, I found his persona enthralling.  It wasn’t just Englander’s long tresses, curly and appearing rebellious and insouciant, free of all uptight anxieties. Though truthfully, I have always found guys with long hair attractive, maybe from my ’70’s childhood.  Here was someone from a religious Jewish home who was able to blend his actual Jewish learning and knowledge with the tools learned at the best, most celebrated and prestigious writing program in the country, the Iowa Writers Workshop (whose graduates include Flannery O’Connor, John Irving, Ann Patchett and Raymond Carver). That was what I wanted to do, sort of, without spending two years in Iowa.

The idea that someone could take the highest level of devotion to craft and learn from the best teachers of fiction in the country and then apply that knowledge to writing about Jews and Jewish texts was a fantastic one to me… and to others – Englander received a whopping $350,000 advance for his first book of short stories, a feat headlining an article at the time about the state of the short story.

Instead of doing these things myself, I dreamed about meeting the person who did do them.  I knew that at the time his book of short stories came out, he was living in Jerusalem and from the bits and pieces I gleaned, I constructed a whole life for him there.  He would daven (pray) at Yakar, a funky, liberal, pushing -the-envelope of Orthodoxy synagogue in Jerusalem, and live with others in the observant Jewish fold, but they would live by rebelling against established norms in ways large and small, like ensuring women greater access to sacred texts and the opportunity to take a more active role in ritual life.  I imagined Englander living the American ex-pat version of the Srugim TV series, before the hit show existed.

And then, when I started reading interviews with him as his book was published, I found out that he wasn’t conforming to my script.  He had decided he was an atheist, had departed from religious observance, and made his own personal Sabbath on Tuesday.

The allure he held for me waned with my disappointment that he had left the religious fold.  But I never despaired; after all the term in Hebrew for those who grow up religious and left the fold is “datlash” someone who is “past religious” meaning, as I have discussed elsewhere, that religion had been a significant part of that person’s life in the past.  The moniker connotes a level of respect for what came before, that the individual does not observe now, or not observe as he or she had formerly, but that religion still holds a place in this person’s life.  Most writers are informed and conditioned by their upbringing, and I wondered whether with this would also be true for Englander.

So when he came to Pittsburgh on October 24 to read from his previous novel, Dinner at the Center of the Earth, I was interested to learn that the new novel being published in spring, 2019, was called kaddish.com and intrigued yet again when he told me that the book discussed a women’s yeshiva.

I’ve now learned, from reading the novel and from the interview with him, that, though my fantasy of his living in a funky religious community in Jerusalem was wrong, it wasn’t entirely fanciful. There was a core of Englander that wondered whether if someone can leave the religious fold, might they return too? And then, Englander never really left the religious way of life; though he didn’t live it actively, it was still on the back burner.

Our conversation took place on March 21, 2019, Purim day, and though he had not completed the requisite religious duties required to ensure the punctilious observance of the day in Jewish law, he knew that it was Purim and planned to explore his local bakeries in search of hamantashen.He joked about creating a task rabbit to find said pastries, though he was quick to point out that his neighborhood is one of the least Jewish in Brooklyn.  This means that when he found matzo in his local supermarket it was marked “not kosher for Passover.”

The novel kaddish.com is about whether it is possible to ordain another to take on one’s own religious responsibility.  The central question it poses is that if one sees something such as religious responsibility as fake, can it actually become real?  This sense of the possibility of conversion and transformation, something seeming to have one shape and yet being able to take on another, is the driving force behind the novel.

The novel’s protagonist, Larry, loved his now deceased father, who loved him too; out of love, Larry wanted to be sure his father was able to obtain the proper eternal rest due to him, with one caveat. Larry had no desire to say the Kaddish prayer three times a day for eleven months as he is supposed to, as a son in the Orthodox Jewish tradition.

But interestingly, and most Jewishly, the book is as much about the future as about the past.  Englander says, in our Purim day phone conversation, “On a number of fronts, both as my daughter gets bigger, definitely it has been fine Jewishly, and you want you to work something out.”

He gives the example of a question a kid might ask about a favorite color which is easy for a parent to punt by saying “I’m not into colors now,” but of the questions of God and faith, he wonders about, “the idea of me having to have hard answers to certain questions.” How he and his wife are going to answer those questions is much of the thinking behind this book.

What seems to be the subject of kaddish.com is change, how when a person changes one way he or she can change back as well.  In an interview about his previous novel, Dinner at the Center of the Earth, Englander stated about his protagonist, “But what interested me so much more, is what would it take to flip someone over ethics? To change their beliefs through empathy? That’s how, for me, an X becomes a Z.”

Englander tells me he “gets teased” that he will be “kashering the kitchen and having a beard to the floor” by his wife because, although he is both secular and an atheist he is “a religious soul.”  He gives as an example of eating a piece of fruit and saying that if it is the shmitta(sabbatical) year, he wonders whether tithes have been taken from the fruit, as required by Jewish law, and whether he should eat it.

Because of the teasing about his seemingly inherent religious nature by those around him, he is aware that “I have it in me” to become religious since it is a “part of myself that I know is there.”  For his character Larry, this question of flipping and becoming religious is the switch that is thrown when the character feels “he has lost his father’s soul,” and must somehow work to get it back.

Englander states that “Judaism is really forgiving, we will find you a way” as being its baseline mode. He elaborates that if there is a problem in how one is doing something, the tradition will say “You try your best, now that it isn’t possible, we can find a solution.”  He gives an example of a particular rule about something that should be done ahead of time, but once it has not been done, a person will be told, basically, it is okay, this is only commanded by the rabbis, not by the Torah, so though it isn’t ideal, it is still fine. He concludes with praise for the Jewish way that is “pretty creative, will find you a fix” when necessary. These nuances are what only those who are versed in the tradition and who have lived within it are able to grasp; the entire text of the novel is very much informed by this insider’s perspective.

Englander tells me that the key moment in this novel is not what we might guess. The real turning point for him was in figuring out who Larry’s wife, Miri, was as a character.

Throughout the novel, whenever Larry is unsure what to do or needs advice, his more learned and more even-keeled wife is able to provide what he is seeking. The novel never specifies exactly what type of Jewish community Larry and his wife are part of, but the boys’ school he teaches at and the yeshiva he flies to in Jerusalem seem to be of the right wing persuasion, not the kind that would welcome a woman who learns full time at an institution devoted to enabling women to study texts of Jewish law which had not been so accessible to women in earlier generations.  In other words, Miri, the pious and learned Jewish wife in the novel, is very much a rebel.

So, kaddish.com does, in a way, come back to my fantasy Nathan Englander, living as Orthodox Jew on the envelope- pushing fringes of Orthodoxy in Jerusalem, though it is far from how he lives his actual life in Brooklyn’s least Jewish precincts. That is the thrill of fiction, that imaginary worlds can make real things that would never occur in actuality, and surmises can be followed through to see where they might conclude.  Perhaps, from that perspective, it is somehow providential that Englander and I speak on Purim, the day of “vi’nafokh” “overturning,” when things that have been one way, become another, even if only in fictional worlds.