When You See Richard Sherman What Do You See? 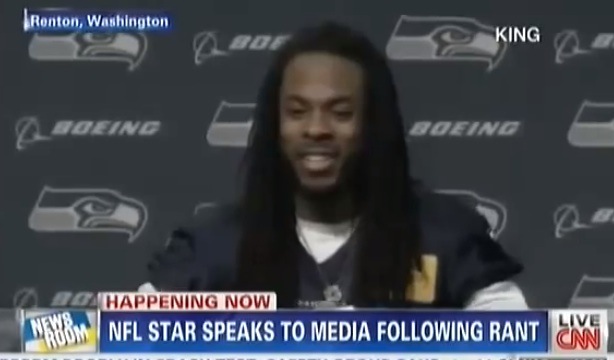 One of many Super Bowl story lines this week will be who is Richard Sherman, the star cornerback of the Seattle Seahawks. Last week in a post game interview, moments after his pivotal game winning play breaking up a pass in the end zone that put the Seahawks in the Super Bowl, Sherman let rip a crazed rant focused on Michael Crabtree the opposing receiver and a wild over-the-top hyping of himself as the best cornerback in football.

The interviewer appeared shell-shocked and within minutes mainstream media and social media were ablaze calling Sherman every thing from the quintessential brash trash talker to someone on meth, from classless and unsportsmanlike to an arrogant thug. According to IQMedia, thug was used 625 times in the media on the Monday after the game. And, as we have come to expect from the Internet, there were thousands of phantom bullies reminding us there are plenty of racist, hateful, angry people in our country whose vitriol was far more outrageous than anything Sherman said. Here’s just one example: “Richard Sherman deserves to get shot in the (expletive) head. Disrespectful (N-word)!”

As always in these sorts of media circuses, the wisdom to be learned comes far more from examining our reaction than Sherman’s actual behavior. We want people like Sherman to act as Gladiators on the field, to play their hearts out, to violently hit each other, and then we stick a mic in their face with not a moment to decompress from the amped up attitude of the game.

Well, we learned 15 seconds does not define the man. None of us knew Sherman grew up in the crime, drug, gang ridden Compton section of Los Angeles, was raised by incredible parents, and overcame seeing friends killed and people’s lives ruined to become a Stanford graduate with a 4.0 GPA, a writer for Sports Illustrated tackling issues such as player safety, and a community role model.

But not knowing anything about Sherman didn’t keep us from judging. So here is my question: What job does judging get done for us?

Given what we now know from psychologists like Daniel Kahneman and Jonathan Haidt, our reflexive emotional reactions/judgments come fast but the ethical-spiritual challenge is to slow down and use them as a source for self-awareness as they say more about us than whom we are judging.? I too was shocked and horrified seeing Sherman’s outburst but as I watched his news conference the next day when he not only seemed remarkably calm and charismatic but also did a serious eloquent deconstruction of the media’s portrayal of him worthy of the finest media critic it struck me how we rarely know enough about another person to define them and “close the gap between our perspective and another’s”. (I thank my colleague Rabbi Michael Bernstein for this insight.)

The less we know about a person and the more extreme our judgment, the more that judgment is a projection of some unconscious guilt we hold for something we have thought or done. Oh, how I know I have pulled a Sherman, sounding wild and crazy, at my own level, when I have “won” after being or thinking I have been “dissed”. How many of the hateful judgments offered were a reflection of unconscious guilt and shame people feel for the racism and “thug anger” they harbor.? I have discovered, more than I would like to admit, that my judging/being judgmental is less a way to express my values than a way to avoid realizing how I have failed to lived out my values?- the very value I so clearly see missing in the person I am judging.

Can our reflexive judgments about others be tools to break open assumptions and perceptions about our selves? I am not suggesting we become saintly people so evolved to be above judging and always giving people the benefit of the doubt. Rather, we need to see judging and even being judgmental as a necessary part of the human experience, which requires we cultivate and employ will and discernment to uncover our painful flaws that have evoked our judgment.? Our judgmental judgments are tools and invitations for self-discovery.

So how did you judge Justin Bieber’s behavior this past week – drunken driving, street racing in a Lamborghini in a residential Miami neighborhood, driving without a license, resisting arrest, and nastily cursing out the arresting officer. Whose behavior was more “thug-like”? Guess we don’t find Justin Bieber as threatening as a Black man with dreads.