The Year of the Selfie 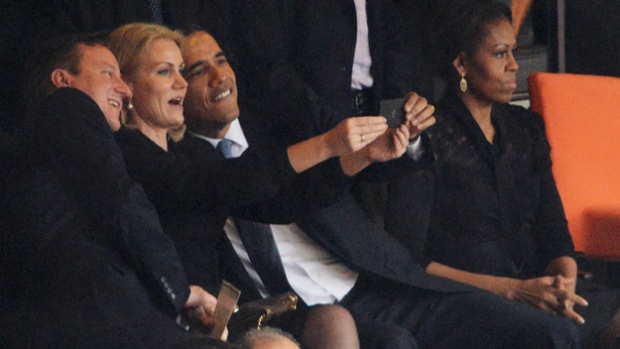 Drum roll! What is Oxford Dictionary’s word of the year for 2013?? SELFIE! The term describes photos that people take of themselves to post on social media sites or similar platforms. The use of the word has gone up a staggering 17,000% in the past year.

Not only have we had expected celebrity selfies from the likes of Beyonce, Justin Bieber, and Kim Kardashian but, also we had an ill-advised political selfie of President Obama with the PM’s from Great Britain and Denmark that made big news.

And our first Papal selfie.

People have been photographing themselves since 1893 when Robert Cornelius took the first self-portrait. Do you remember how fun it was to crowd with friends into those photo booths at carnivals and five and dimes that delivered a strip of four consecutive shots? Smart phones with front-facing cameras, Facebook, Instagram, Snapchat, and Vine, like so much technology, has made photographing oneself incredibly easy and one more example in the rise of self-publishing of all kinds of information and images.

James Franco wrote recently in the New York Times that selfies are about getting attention and, “…hell, it’s what everyone wants: attention. Attention is power.”

Clearly, if selfies weren’t somehow a meaningful event, people wouldn’t care so much?

So what do you think about selfies? Are they narcissistic or empowering? Self-indulgent or self-revealing? Are they intimate offerings taken to share the immediate and impermanent moment or expressions of low-self esteem and loneliness?

Are they just safe, controlled, forms of experimenting with identity or proof that our sense of self has become desperately based on other’s approval, physical appearances, and with whom we are hanging?

Maybe we just don’t know how to think about selfies yet. We know how to make sense of people who are famous or being paid to pose but not of this explosion and democratization of self-presentation. And while there are bad examples of the use of selfies, perhaps we are just in the early phase of this new capacity and so we have a phenomenon that will normalize like so many other trends.? And 2013 – the year of the selfie – will become a footnote as selfies stop being cool.

What does seem true is that our digital lives have morphed into mirrors and our identities increasingly formed from what we are doing right now. Is this what wisdom traditions teach as the Power of Now or is it the beginning of selfieism? Something to watch for in 2014.