The Weakness of Power and the Power of Weakness 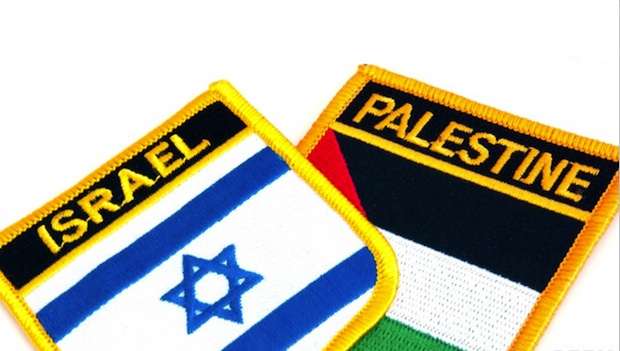 “Nazis, Nazis, Nazis,” said Steve our 40 year-old, charismatic, Australian (by way of a half dozen countries) guide as we began a walking tour of Berlin, “that’s all most people think when they come to Berlin.” My family and I were in Berlin for a week – our first time in Germany – and Steve was so right. Berlin is young, hip, culturally rich, fun and edgy – and for the week we were there not fifteen minutes could go by without thinking Nazis, Third Reich, Holocaust. Memorials, museums, the guttural sound of achtung in announcements, any elderly person, and the Fette Fraktur black letter typeface all triggered anxious mixtures of incredulity, anger, horror – and guilt about having such a great time in such a fascinating city that was the seat of genocide. Most of the time these were passing feelings we masked and mitigated by macabre jokes about being detained, arrested, or deported.

And on the third day Israel and Hamas went to war: our family vacation became surreal.

Regularly checking emails, Facebook, and news sites, I worried about my tribe, my people including family, good friends, and colleagues sent running, with fifteen seconds of warning, to bomb shelters, basements, and stairwells to protect themselves from Hamas’s indiscriminate firing of hundreds of rockets. I followed Israel’s response – by now over 4,000 sorties targeting terrorist rockets, rocket launchers, factories, storehouses, tunnels, Hamas offices and terrorist’s homes. I worried about the inevitable Palestinian civilian deaths because of the superior power possessed by Israel and the way Hamas, a nihilistic group whose charter calls for the killing of every Jew and whose war to the death strategy of civilians on both sides makes it a contemporary death cult, cynically embedded themselves and their weapons within civilians. I kept track of the “score” – numbers are important in Berlin – at the time over 220 Palestinian deaths (now over 1800) the majority civilians of whom twenty percent are children and at the time one Israeli death (now 68). All the time hoping there would be no ground invasion (an unrealized hope), that there would be a truce (another unrealized hope), and that this cycle of violence in which the dead die for nothing, stops…until the next time.

Let me be clear before I write the rest of this post: the Jewish people is my people. Whatever the specific causes, whoever is to blame for where we are right now and whatever Israel’s future policy regarding Gaza and the Palestinians should be – issues far less black and white than all sides including “my side” make it – while Israel is at war I want Israel to “win”. Once at war, I am reluctantly tribal though hopefully not triumphal, as war – however justified – is always a monstrous failure and tragedy, which implicates us all.

I would prefer we Jews stop claiming some moral high ground given how many civilians have been killed (including more than 300 children) and injured (more than 9,400) and simply state that Israel is a nation just like any other nation, no more moral than the United States. Israel is doing what any other nation would do in defending its interests and protecting its citizens. Israel has made a security equation just like any other nation trying to survive in a hostile sea of hate: its need to eliminate enemy threats trumps what are lamentable, serious civilian casualties but ultimately not significant enough to change policy (though given Syria and Iraq what constitutes significant/tolerable numbers of civilian deaths in the Mideast these days is different than anywhere else in the world). The collateral civilian casualties incurred are unintended and will not deter Israel from doing whatever is required to keep its citizens safe just like every other nation.

Of course what winning this war means is ambiguous given that over the past 12 years there have been five operations against Hamas – four of them in Gaza. Everyone knows that even if every tunnel is destroyed and each and every Hamas fighter eliminated the Palestinian people’s aspiration for national independence will not disappear. Israel will win the battles of this war but peace and quiet for the citizens of Israel will only be achieved through political compromise – something neither side is presently capable of. In other words, there is winning that quiets things down for a while (not to be underestimated if one is living under the threat of rocket attacks) and there is winning that creates the space the day after the war ends to redouble one’s efforts to make peace.

Sitting in Berlin I was struck by how the abject powerlessness of Jews 70 years ago has been replaced by unprecedented power. Israel, with the fourth strongest military in the world and a strong relationship with America (without whom there would be no Iron Dome) can now protect itself against those who want to do it harm. But, the fact that Israel’s dominance of power can’t stop Hamas’s ability to terrorize Israelis despite its relative powerlessness made me reflect on how the dynamics of power and powerlessness and the burden of victimhood haunt this conflict. While there is no comparison between the Holocaust and the Nakba (the displacement of 700,000 Palestinians from Israel in 1948) the shadow of shame and humiliation, the just under the surface anger and rage, and the ever-present specter of fear and vulnerability that both combatants experience make this conflict much more than simply a moral drama of good and evil. This will not be a conflict decided by who has more power.

These are two traumatized people. For the Israelis insecurity has become existential. For the Palestinians humiliation has become the defining quality. Both are victims of nightmares of powerlessness and fantasies of power. And just as nothing can undo the humiliation of the Nakba and the fact that Jews returned to the land, have prospered, and are going nowhere so no amount of power and bombs can heal the Jews from their trauma of victimhood and nightmares of vulnerability. And each side continues to exacerbate precisely each other’s Achilles heal. Israelis – justified or not – continue to humiliate Palestinians and Palestinians – justified or not – continue to evoke Jew’s fear of annihilation.

The tragic irony is that the Palestinians, who can never destroy Israel but can terrorize Israel despite their overwhelming powerlessness, need to discover the power of their weakness while the Israelis, who despite their overwhelming power can never wipe out Palestinian resistance, need to discover the weakness of their power. At present neither tears nor diplomacy will make any difference as both people’s have leadership incapable of transcending legitimate fears and resentments and the burdens of being perpetrator and victim. And both have majorities who though desirous of peace, feel at least for now, that being in conflict is safer than making peace. And they continue to traumatize the children.