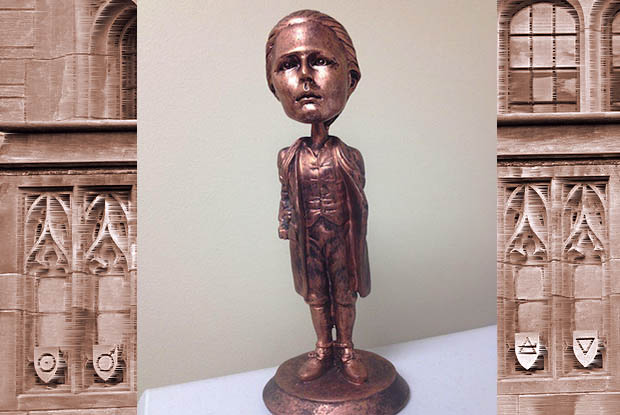 Nathan Hale had only one life to give for his country, but almost 250 years after his death, there’s still plenty of Nathan Hale to go around, and that has upset a Yale-educated author a great deal. Let me explain.

As a gift to university supporters, the Yale University class of 1975 recently offered a Nathan Hale bobblehead, a replica of a large bronze statue on the New Haven campus. Like the original, the bobblehead depicts a bound and shackled Hale – who graduated from Yale in 1773 – and is inscribed with the patriot’s famous last words, uttered before he was hanged by the British: “I only regret that I have but one life to give to my country.” And here’s where Yale alum and radio host Eric Metaxas (also a Dietrich Bonhoeffer biographer) enters the story.

Should we be surprised that iconic events inspire, well, icons?

While reading the alumnae magazine, Metaxas says he was “staggered and grieved” by the bobblehead offer, and what he viewed as his fellow Yalies’ mockery of a “holy event” in U.S. history. I have a some sympathy for Metaxas’ feelings, given that I share his view of Hale’s death and famous last words as an iconic (even sacred) chapter in our national story. On the other hand, should we be surprised that iconic events inspire, well, icons?

Why must Metaxas (former editor of the campus humor magazine, the Yale Record) assume that the bobblehead is a form of mockery, as opposed to a form of honor? Apparently, he feels that some famous figures are above being saluted with bobbleheads. And this is where his well-intentioned sensitivities take a weird turn, as can happen for many people these days, morphing into maddening political correctness that loses both any sense of humor and an ability to make wise distinctions.

Metaxas has asked: Would people make bobbleheads of Martin Luther King Jr.? How about Islam’s founder, Muhammad? Would people make bobbleheads of Matthew Shepard or Trayvon Martin?? To which I respond, “What are you talking about?” Are we really meant to see those individuals as equals, deserving of equal respect? Are their deaths all comparable to Nathan Hale’s? Are any? Clearly not.

Dr. King, of blessed memory, is the most comparable. But having been assassinated makes his death quite different, and as a nation still wrestling with race, perhaps less appropriate to “bobblehead” – though they do exist, and I have seen them, displayed as symbols of anything but mockery. Muhammad died of natural causes. Mathew Shepard was murdered for being gay – i.e. who he was, not actions he took. And the controversial circumstances around Trayvon Martin’s death were tragic, but not found in court to be criminal.

Yes, each of those people may be iconic in some ways, but when Mextasas implies they’re comparable, we are asked to sacrifice meaningful distinctions in the name of sensitivity. Despite his good intentions, those comparisons – meant to justify outrage about the Nathan Hale bobblehead – demonstrate instead that we often confuse mindless relativism with appropriate caution about treading on other people’s feelings.

We need not claim that because many things offend some people, all things that offend should be treated as equally offensive, all of the time. That’s the very definition of political correctness running amok, and it only strengthens the positions of those who would have us believe that any extra sensitivity (to cultures or communities not our own) is unnecessary. They are wrong, but so too are those who lose all sense of proportion and humor on the road to greater sensitivity.

Now, where do I order one of those Nathan Hale bobbleheads?? I can put it next to the ones I already have of Martin Luther and Thomas Aquinas, given to me by Christian friends.