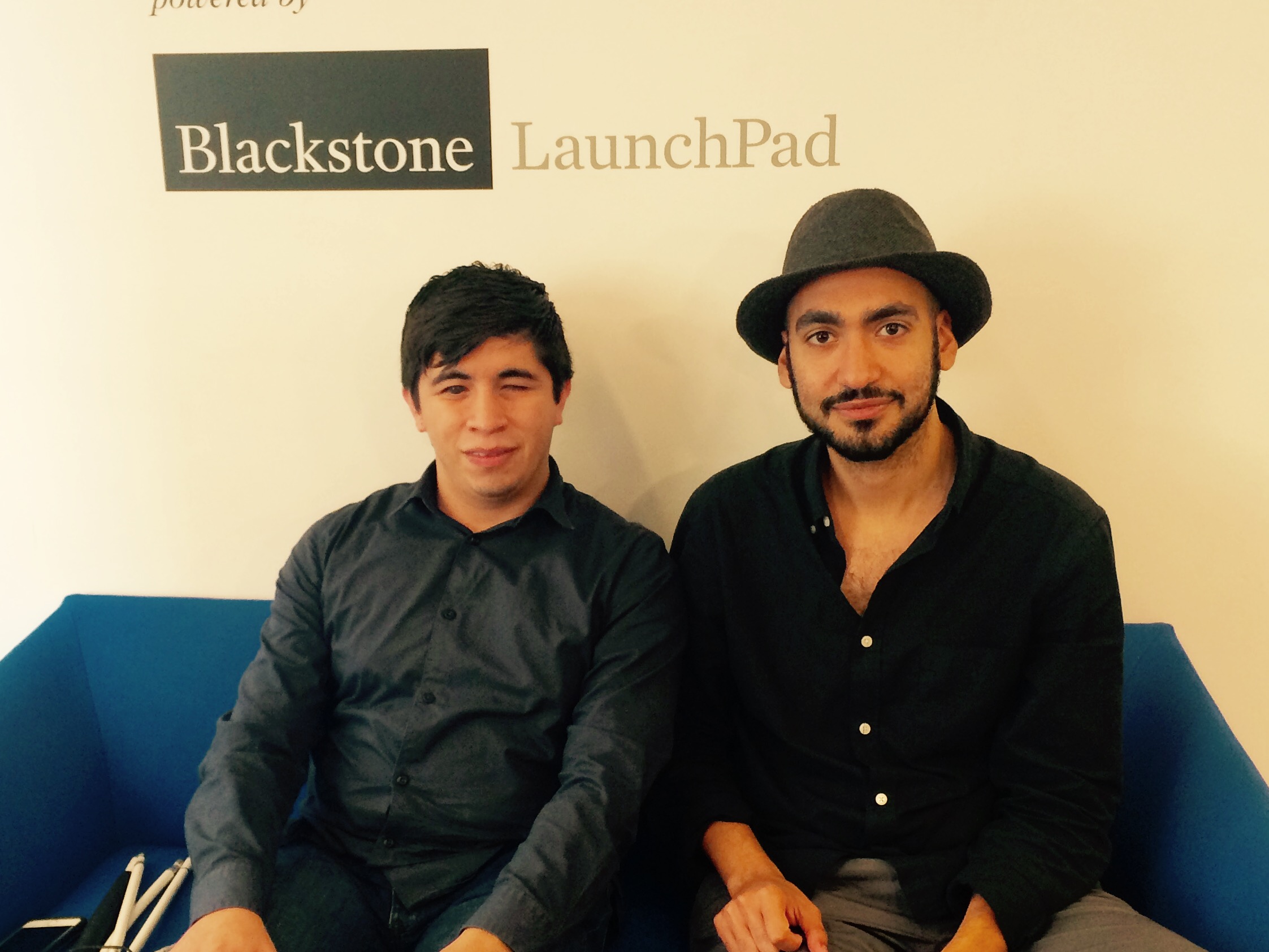 Rushing through NYC is one of my least favorite activities. From the honking horns, to the screeching sirens, to the tourists crowding every corner of Times Square; if you can’t walk like a New Yorker, it’s all too easy to get run over and left behind. Anyone who lives in the city knows exactly how packed it gets in the summer, and how difficult it can be to get around the corner, let alone to the office.

With crowded streets and people who aren’t afraid to shove, maneuvering your way around the city can be a strenuous and even dangerous mission if you are visually impaired.

That’s why friends and colleagues Edson Tapia and Nicolas Metallo decided to take on this problem from the inside.

Edson Tapia is a psychologist from Mexico. He met Nicolas through a mutual friend just about a year ago over a video call when he was studying in Spain. Isabel Izquierdo, a fellow member of their team, was the one to make the connection.

The goal was simple – create an electronic program to help the visually impaired community gain autonomy in a busy world that has little regard for those in need.

The team worked closely with Edson, who is legally blind himself, to explore the existing need and figure out the best way to solve it.

“Big heroes think they can land in a place like Africa and just solve all the problems,” said Nicolas. People like to believe they can relate to communities they don’t even know or understand.” But how can you approach a problem you’ve never experienced yourself?

Edson was a human window into the world of the visually impaired – providing detailed descriptions of the challenges he overcomes each day. This on top of other research gave the team a solid foundation upon which to expound.

The most prominent problem was clearly navigation, but the team wasn’t about to compete with the big guns like Google Maps. So they decided to take advantage of the areas where big name navigation systems are lacking–like terrain description.

While Google Maps can tell you where and when to turn, it won’t tell you about the set of stairs you need to climb, or the giant hill standing in your way. To the visually impaired, these aspects of day-to-day navigation are imperative in order to effectively maneuver around.

Invip is a computer program that aims to help those who are visually impaired gain autonomy by explaining to its user what is in front of him or her. The team recognizes how accessible smart phones are these days, and aims to release the program in the form of an app.

Invip is one of this year’s companies at the NYU Summer Launch Pad, an accelerator for teams of NYU student entrepreneurs. The program supplies grant funding, a workspace, and one-on-one coaching.

In Invip’s own words: “We are currently prototyping a portable solution that uses Amazon Alexa and Computer Vision to make it possible for visually impaired people to safely move around the city understanding their immediate surroundings. By having a personal assistant that’s reliable, they can interpret and explore the visual world and become independent.”

Edson was adamant in explaining that the program should act like a tool kit–it should offer a route to autonomy rather than forcing the user to rely entirely upon the aid of others, providing a feeling of independence. These tools will include facial and text recognition, as well as feature detection. This means that the user will be able to recognize a face as well as an environment, through the earthly powers of his or her smartphone. Optimally, Invip will even read restaurant menus aloud and let the user know if the person beside them looks happy or sad.

It is too often that the blind are shoved aside. There must be space in the tech world for every person, seeing or not. How can we improve the quality of life using tech?

Edson further explained how difficult it is to get around NYC. He turned me on to things I never could’ve realized on my own. He discussed the infrastructure of the city and how unfriendly it is to the visually impaired — the traffic signs are soundless, making it impossible for a blind person to know when to cross the street.

He continued with a story of coming back to New York City from Brooklyn alone. There was no way to identify which train was where, and getting around in the crowds was practically impossible. A lot of people don’t understand what kind of help you need. Sometimes they act like they don’t even see you.

And that’s not it.

Edson described the process of calling an app-based car service such as Uber, something many of us do unquestioningly every day.

“I always call the driver to tell them they need to call me when they arrive, because I can’t see them. They agree, then never show up,” Edson remarked humorously.

Even something as ubiquitous as money becomes challenging when the only way to differentiate between a ten and a twenty is by seeing it.

“There is no Braille writing on money, it all feels the same. Sometimes I ask people to tell me how much I’m holding in my hand.”

These are things a seeing person could never notice.

However things are quite different in European countries like Spain, where Edson completed his master’s degree in health psychology. Spain works very hard to help the visually impaired community. The traffic lights have sounds and signals to help everyone cross the street safely.

With NYC as stagnant as it is, apps like Invip seem absolutely essential. Unfortunately, it is very difficult to fund a social start-up like this one. The team faces constant backlash for the work they are doing. They described their average work day as, “20% research, 30% tech work, and 50% backlash.”

People frequently commend the team on their startup and how incredible it sounds – but it often ends there. Investors aren’t willing to fund an app with the goal to “save the world.” But this technology is needed. It is essential to teach tech to the blind, as they may be the ones who benefit from it the most. Voice over technology must become simplified and more accessible to make day-to-day tasks like going to the super market available for everyone.

A company needs a lot of things to get off the ground. From tech needs, to research, to funding and connections, Edson and Nicolas are thankful to NYU for all of its help and support.

“It is difficult to find a funder who will say, “I am going to invest in you.'”

It is hard to believe that in a city with over 400,000 who are visually impaired, there are so little resources available. But the team at Invip refuses to surrender. They continue believing, developing, researching, and fighting the good fight.

When faced with backlash, the team remains positive. They have wonderful mentors at NYU Summer Launch Pad and are confident they will succeed. They hope to have Invip available on the App Store early this coming August.

Additionally, Edson discussed his hobbies and his career. He currently works in Mexico as a psychology professor where he teaches seven different classes. He also loves to travel and has been all over Europe. He enjoys learning about different cultures, meeting new people, and learning new languages. Edson speaks Spanish, English, and Catalan – a language he picked up while studying in Barcelona. He has been to countries such as Italy, Germany, Poland, the United States, Denmark, Portugal, and England, to name a few.

Technology like Invip is crucial to the inclusion of the blind community in general society. There is no need for NYC to be an exclusive obstacle course for those who are visually impaired. Invip promotes kindness, equality, and independence. It ultimately seeks to provide autonomy to the ones who need it the most. With a positive attitude and a fervent passion for making the world more livable for all – the team at Invip truly encapsulates the word “integrity” by all definitions.