The German Chancellor and the Crying Refugee 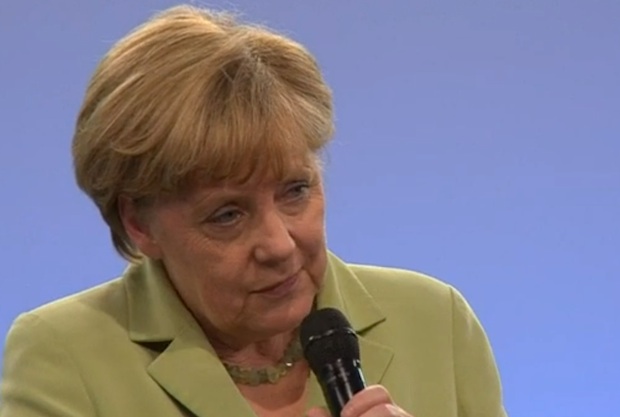 In the midst of a very eventful summer for the European Union, German Chancellor Angela Merkel recently found that she’d unexpectedly gone viral on YouTube. During Merkel’s otherwise pedestrian TV appearance on Good Living in Germany, a 13-year-old Palestinian refugee named Reem asked a heartbreaking question about facing deportation from Germany to her native Lebanon.

When Merkel noticed the girl cry, she reached out to console her, saying that she’d done well. But the moderator took exception, saying this was not about doing well, but about Reem’s anxiety. Merkel insisted she was just taking a moment to streichelt – to soothe or stroke – the distraught girl.

Her utterance, ultimately perceived by many as callous, led to a raft of social media posts ridiculing the gesture and taking the Chancellor and her administration to task for doing little more than “stroking” while people suffered. Others came to the Chancellor’s defense, giving her credit for the tenderness of the moment and for being honest about the reality, rather than stoking false hopes.

There are real questions as to what, indeed, can be done to accommodate refugees in Europe, or attend to the ills that endanger those living in poverty or war zones. However, as I watched the video clip, I recognized a great disconnect between what it takes to show affection or care to someone in the moment and what it takes to act on behalf of another’s well-being, in an ongoing and sustainable way.

This disconnect is not limited to world leaders. The dynamic plays out in countless situations. A person with no permanent home approaches a driver at a traffic light. How should the person in the car respond? A dollar, because every dollar helps? A twenty, because it might be more helpful? Nothing, because you know, you can’t give every time? If the driver gives nothing, is it more appropriate to look away to not send a false signal, or is it better to make eye contact because it’s a way of treating someone as a human being? Sure, all of these responses seem problematic – but what can you do?

Are gestures worthwhile ways of showing compassion, or are they empty mockeries?

The #MerkelStreichelt incident is a kind of Rorschach test about our expectations in situations such as this. Are gestures worthwhile ways of showing compassion, or are they empty mockeries of more meaningful, concrete actions?

The biblical prophet Isaiah, castigating the ancient Israelite leadership for replacing meaningful measures to help the poor and oppressed with empty rituals of offering sacrifices and undertaking fasts, says: “I am disgusted with your New Month and Festival celebrations.” From this lament, it seems he’d be among those criticizing the Chancellor’s gesture, and might even look askance at someone merely greeting a beggar who needs help.

However, when Isaiah talks about how to bring justice, he says, “Learn to do good; seek judgement, relieve the oppressed, judge the orphan, plead for the woman.”

Not “do,” but “learn to do.” Doing good is something we learn over time. In that vein, Isaiah might actually look more patiently at Angela Merkel. Her gesture was not empty, but incomplete – a sign she knows that, in fact, there’s more for her and for so many others to learn, when it comes to “doing good.”

Making a difference for those who are vulnerable, impoverished or oppressed will be a different enterprise than making eye contact, performing sacrifices or caressing a young girl’s cheek. Such actions, however, can be a part of the process, a positive move in that direction.