Don’t You Trust Me? 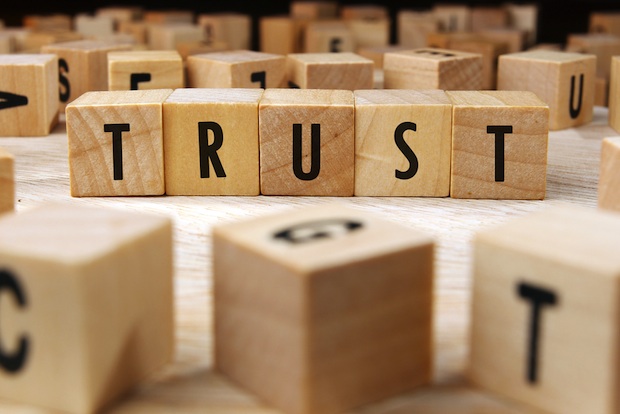 How many times have I – or my wife, or most any parent I know – heard the words, “Don’t you trust me?” from a child who’s frustrated by our unwillingness to acquiesce to an unwise idea?

Well, it turns out that American politicians tend to ask us the same question. The difference is, with our children, the answer is that we probably do trust them, just not the idea they propose. With our politicians, is that the case? Isn’t it true that we just don’t trust most of them all that much?

Trust is among the most valued and valuable assets in our lives, and it’s taking a beating on many fronts – but none as severe as on the political front. Whether you follow politics closely or not, the “death of trust” insights in this New York Newsday column by Michael Dobie have an affect on all of our lives.

We have many reasons to be cynical about political leaders, but at some level, cynicism is a choice we make.

As Dobie points out, Confucius teaches that all rulers (nations) need three things: weapons, food and trust. But it’s trust which is the most important. And if you take that down to personal relationships, most of us can remember times when we’ve managed to work through tension, even loss of love – but when trust really dies….well, you get the point.

How I differ with Dobie is that where he sees the “death of trust” in politicians as entirely their fault, I see the building and maintaining of trust as more of a two-way street. We surely have many good reasons to be cynical about many political leaders, but at some level, cynicism is a choice we make just as much as trust is.

Of course, evidence matters, and we all have our breaking points beyond which there’s no going back – whether it’s trusting our leaders, or our personal relationships. No one should be anyone else’s patsy forever. On the other hand, the reason they call it trust, not certainty, is because it demands an investment beyond immediate evidence, or at least the willingness to see our role in the relationship and its future.

Trust, be it in politicians or loved ones, can shrivel and die for complex reasons. It’s not simply that someone behaves badly and then we stop having faith in them. Thank about how often we put up with troublesome people, while at the same time asserting that similar behavior in someone else is “proof” of their untrustworthiness.

In the case of the general public’s relationship with politicians, my issue is that it’s not only bad behavior by individual politicians eroding our trust. Many voters have come to equate trustworthiness with a degree of agreement, and that’s a serious problem; difference and/or disagreement are often experienced as deceit and betrayal.

With virtually any information we want never more than a Google search away (information which will usually confirm what we already believe), nobody is ever just “wrong” anymore, they are lying. But actually, sometimes people are just wrong – or, even more radically, they disagree with us and yet they may turn out to be right!

Working on our own ability to appreciate those possibilities has got to be central to restoring trust. When it comes to private life and those in public life, if we want to rebuild trust, we all want the other person to do better after having let us down. But we have to participate, too. It not only takes two to tango, as the old saying goes, it also takes two to trust.

For more insights about trust, including a video discussion, click here.