The Danger Of The Us Vs. Them Education Of Niche Religious Colleges 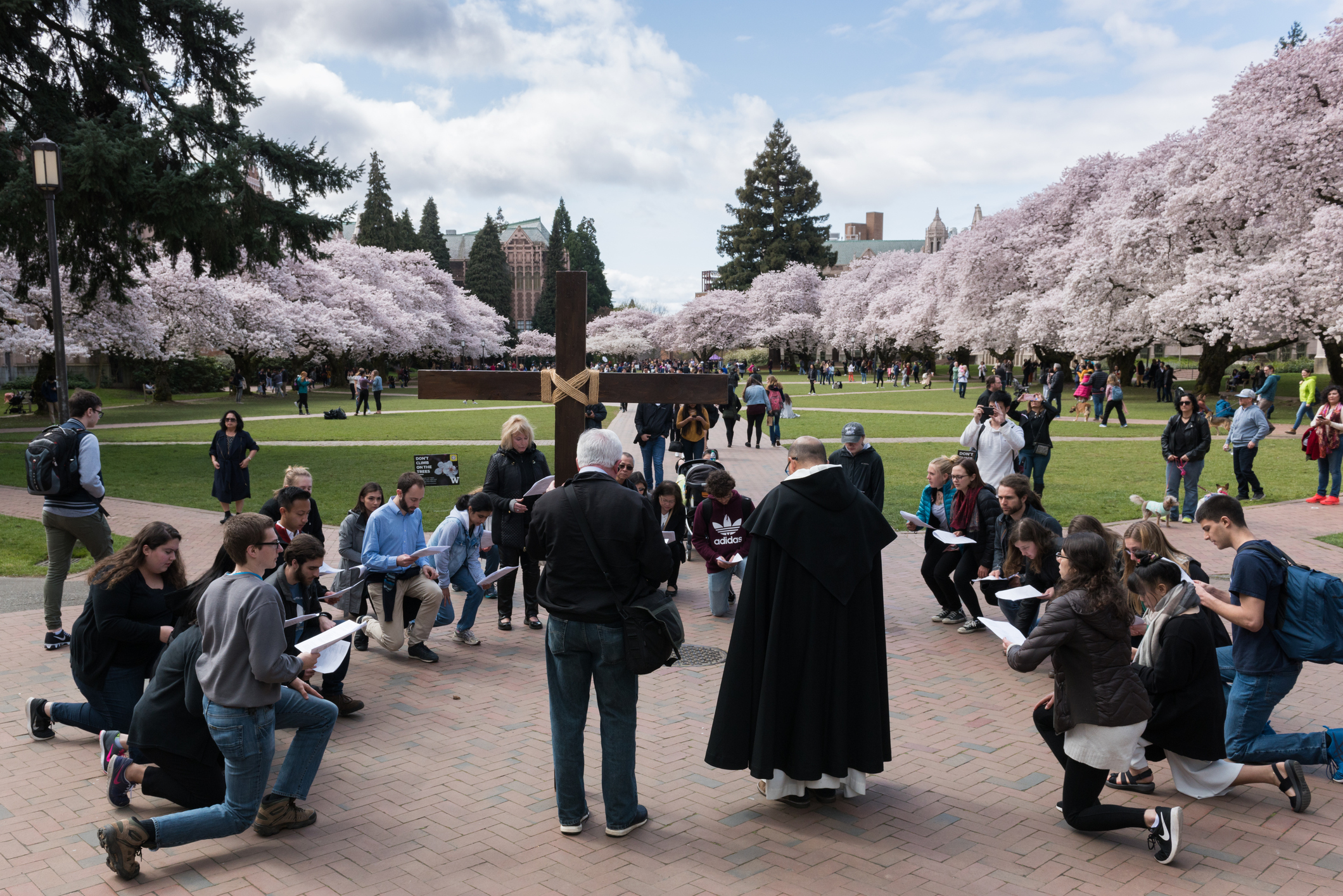 It is the 40th anniversary of Christendom College, a small Catholic liberal arts university in Front Royal, Virginia. In my tight-knit Catholic homeschooling circle growing up, it was something of a given that most students would be attending there after graduating high school. Christendom was the widely acclaimed cream of the crop capstone of moral and academic foundation, as an institution which championed an “authentic Catholic culture” in the face of what many have considered to be a degeneration of the moral fabric and intellectual fiber of our current secular society.

But, looking back, I have a feeling that I personally am content with not having attended. Judging from most of what I’ve learned about the institution over the years, I believe I may well have found the tone and implications presented in the programs and curriculum fairly stifling. Now, quite obviously, many students have attended and found the experience to suit them stylistically and shape them in a way which propelled them in the course of life they wished to pursue with regards to Western liberal arts studies. I also believe there are many sincere people involved in the programming and the project as a whole, seeking to preserve various aspects of Catholic heritage that they fear may fall by the wayside in the modern world.

However, I cannot deny that it’s not merely style that disturbs me, but rather content selection and, more importantly, the manner in which it is presented. As one who did go through several high school programs offered by the same founding families that run the college, most notably their world history course, I will do my best to outline these impressions, because I believe it is not just about a single university but rather an ingrained problem that can sink into cultural, societal, or religious grouping that begins to isolate itself from the outside world and increasingly view everything not made in their own image and likeness with unthinking disdain.

Christendom is proud to be at the foreground of keeping alive Greco-Roman intellectual and linguistic traditions, which they see as the building blocks of Western thought and therefore integral to the development of Catholic theological and philosophical thought. All of this is certainly fair enough, as is the insistence that Latin and Greek be learned before moving onto higher studies of ancient cultures, in order to properly understand the nuanced original documents from these cultures. But the almost exclusive focus on Western Civilization, and seeing all subjects and storylines from that vantage point, creates an impression that “Western culture” is synonymous with “Catholic culture.” It allows for minimal nuance or understanding towards other cultures and civilizations which are studied in historical documents and curriculum, even though it does presume to make negative commentary on them.

This is particularly true when bringing up Eastern cultures and religious traditions, most especially Islam, but not exclusive to that, within their overview of world history. Worse still, is that fact that they seem to consider their version of history from European eyes the only valid perspective, as transmitting “truth” with a capital T. There is no effort whatsoever to broaden beyond the box of the Western worldview, and we, as Catholic students, are expected to accept that as our heritage, without capturing the true essence of what it means to be universal, even according to the basic maxim that “there are two sides to every story”.  The general feel of the way stories, literary or historical, are transmitted through this worldview is rather that there are “good guys” (us) and “bad guys” (them), and God is somehow always on our side.

I realize that Christendom is a specialty school, and can not be expected to cover everything, but the glorification of the curriculum offered as the be all and end all in educating Catholic youth is worrisome in itself. It indicates that further explorations into the story of our world are somehow illegitimate or lesser then what they already have to offer. The concept is that other religious or cultural perspective should only be learned in the insulting light of “knowing your enemy”. The fact is though, we’re not expected to “know” much, except that everyone non-Western is basically either hopefully primitive or just pure evil. We are hardly ever taught to view them as our fellow human beings, with their own stories, heroes, discoveries, epiphanies, developments, traditions, struggles, sufferings, and needs who share the human experience on this spinning ball we call home.

This is the attitude permeated in the institution and curriculum which I, as a life-long practicing Catholic, would beg to challenge. To put it simply, it is not the West that is supposed to be the center of our lives, but the Truth, which transcends culture itself and is supposed be centered in fair-mindedness, understanding, and empathy for all people. This is what we should be teaching impressionable young minds, not to play cop-out games such as “history is always taught from one perspective or another”, thereby absolving oneself from the need to strive after fairness. Dr. Warren H. Carroll, the founder of the university, famously stated: “Historians are the guardians of memory.” But when they focus solely on naval-gazing, the memory becomes warped. I have experienced it in conversations with my fellow Catholics time and again.

Christian civilization (what might just as well be identified as empire-building) becomes more important than cultivating genuine Christian spirituality. There is an emphasis placed on trying to train leaders to “restore the temporal order”, but the question is… what is “the temporal order” in this day and age? Is this merely a euphemism for a lock-step system of thinking which is incapable of seeing beyond one’s one nearest horizon? Or indeed, if the reference to “temporal order” came from a Muslim establishment these days, would it not receive heavy censure as being suspect of theocratic intent, by the very same Christendom alumni who rush off to intern at a small-time right-wing news outlet, raring and ready to launch into rants about Arabic calligraphy and Halal meat and burkini beachwear ? The double standard is noteworthy.

The curriculum  is promoted as the same education that produced the brightest minds in Western Civilization. Time-tested methods may be all well and good in their own right, and perhaps might have been considered “all one needs” in 13th century Europe, which Christendom curriculum purports to have been “the greatest of centuries.” But times have changed, the world has gotten smaller and opportunities to research other areas have gotten broader.

In addition to this, the job market has gotten more complex in this day and age. They may advocate career diversity, but in truth, what you can do with what you learn at a niche college like Christendom is limited, and the advertisements of being “set for life” woefully misleading, especially given the sheer tuition cost. Similar to Hogwarts, if I may draw the fandom parallel, the opportunities for real-life long-time careers are broadly limited to professorship and politics (minus the fun of turning lifeless pillows into cute, rambunctious animals… just saying).

But Christendom truly sees itself as championing a struggle to “free the minds of youth.” They claim to advocate “clear thinking grounded in natural and revealed truth.” The great questions of the world are asked in order to be explored, if not answered. But, we are not getting full appreciation of even the questions if we only accept half of the wisdom of the world.

Why must we view all things with suspicion, and address with ignorance, that which we are told is outside our “safe sphere”? Why should we praise the poetry of St. John of the Cross, but view the works of Mawlana Rumi with suspicion? Why should we twist ourselves in pretzels trying to lend contextual nuance to the actions of crusaders, but fail to chronicle the achievements and philosophical make-up of military leaders such as Saladin? Why should we feel the need to defend every action by a Catholic in history that falls short of our modern moral understanding, and yet emphasize the “barbarity” and near-irredeemable status of every non-Catholic, even fellow Christians from different denominations, with hardly any context extended at all?

We are told to “breathe Catholic”, but does that not on some level mean to breath universal, or otherwise be suffocated? How can we truly even practice any relationship with the Divine Reality when we are so blinded by our own club distinctions and cultural nostalgia we cannot see His presence in all our brothers and sisters in humanity, regardless of background or belief? Perhaps, in fact, we are judged more by how we treat those outside our comfort zones and how close we might wrap ourselves in selective scholarly cocoons, refusing to listen, refusing to see, lest we be forced to alter our preconceptions.

“Dare to join us,” runs one Christendom promotional video. “Dare to answer your call to greatness.”

Beyond Sweat For Bread: A New Vision For Work And Money

Why I Miss My Fourth-Grade Teacher: A Decade Of Publishing Woes