The Collection Of Haggada Masterpieces That Helps Us Learn By Looking 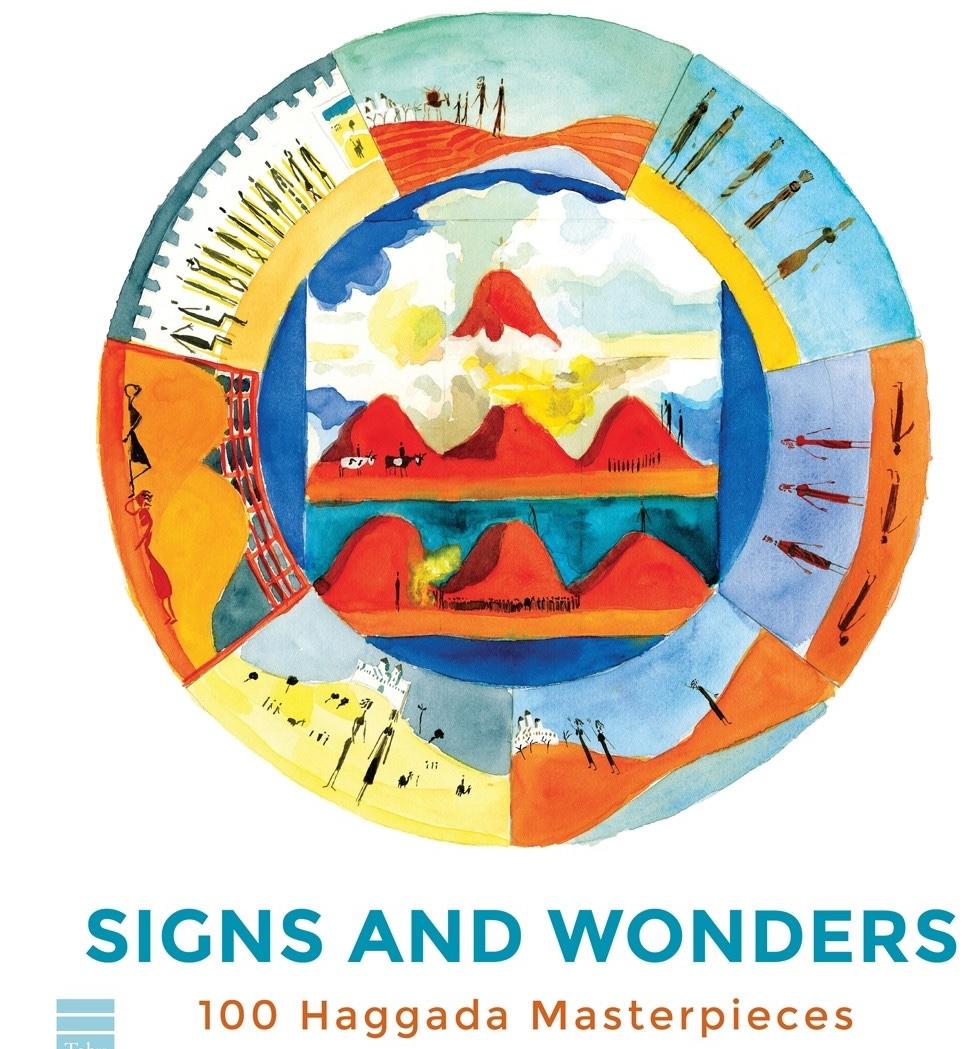 The late Dr. Abram Kanof would have loved art historian Adam Cohen’s new collection of visually significant Haggadot from the past 700 years, Signs and Wonders: 100 Haggada Masterpieces.  Kanof was a pediatrician by profession, but a passionate devotee of Jewish art as his avocation, single-handedly opening the first permanent Judaica collection in a public art museum at the North Carolina Museum of Art in the 1970’s, as well as contributing to the Duke University Library and donating much of his Judaica collection there.

Kanof was also my friend at the end of his long life and I was thrilled to see that one of the many collections Cohen consulted in America, Canada and Israel was the Abram and Frances Pascher Kanof Collection of Jewish Art, Archaeology, and Symbolism at Duke.  Having the visual repertoire of the array of Jewish civilization available to all to admire and learn from was Kanof’s raison d’etre.  Cohen’s new volume provides this exceptionally well.

Signs and Wonders: 100 Haggada Masterpieces is a book meant to teach both those who don’t know much about the varieties of Jewish art and those who want to learn what a seder is about and its significance by looking at 100 masterworks from an assortment of years and also for those, like me, who try to buy a new Haggadah each year to get a different take on the holiday.  Though the magisterial volume by my late teacher Yosef Yerushalmi, Haggadah and History, still has its importance, Cohen’s volume provides a guide as to how to interpret the visual imagery  on the pages of the many haggadot surveyed.

As Cohen explains in his introduction to the volume, the illustrations of the Haggada “serve as interpretations to the seder in particular and to Jewish history in general.” The reasons for artists to decorate the pages of the text for the seder night were varied.  Cohen hypothesizes that among them were “to increase the value of the book or make it appropriate as a gift; to demonstrate the status of the owner or the recipient; or to enhance the seder experience visually and intellectually by illustrating the text.”  His criteria for selection were that he was able to see the whole haggadah to make a selection from it, that he found it visually enticing, and that it is part of a larger tradition of illustrated haggadot.

Cohen was kind enough to provide the Wisdom Daily with a few examples of the works he has chosen for the volume.

The Darmstadt Haggada from approximately 1425, was made somewhere in the Rhineland by a scribe whose name,  Israel ben Meir of Heidelberg, is the limit of contemporary knowledge about him.  The illustration shown here is of a song sung at the end of the seder on the first night, recounting the many events that occurred at midnight.  There are two dozen figures drawn, and Cohen focuses our attention on the fact that most of the figures  “hold a book, and there is an excess of pointing and gesticulating.  Clearly, reading, deliberating and discussing – the purpose of the haggada itself- are the subjects of the two illustrations.  Also, evident is that women are included in the learning depicted in the Darmstadt Haggada.  For at least one fifteenth-century patron, the idea that women would be involved in the scholarly discourse of the Passover seder was not at all remarkable. ”

The Venice Haggada( second image 26A) was printed in the 1599, 1601, 1603 and 1604.  Cohen presents the 1609 image in the collection of the National Library  of Israel in Jerusalem which pioneered the use of a frontispiece with illustrations of the order of the seder.  Cohen writes that “Providing a concise pictorial overview of the entire seder at the beginning of the book would prove to be one of the most widespread graphic strategies throughout the entire history of the illustrated haggada and the frontispiece scenes in the 1609 Venice version would be copied over and over for centuries to come.”

The languages  the Eisenstein Haggada(1928 image 57) was released in  – English, Hebrew and Yiddish- reflect the Jewish immigrant population at the end of the first quarter of the twentieth century in the US.  The Hebrew Publishing Company which produced this haggada put out works in all three languages on the Lower East Side of New York City.  This frontispiece has Egyptian monuments and Cohen explains that the artist Leon Israel “created a pastiche of famous Egyptian monuments that reflects Western enthusiasm for Egyptian archaeology, a phenomenon exemplified by the excitement that attended the discovery of King Tut’s tomb by Howard Carter in 1922-23.  With its pyramids, sphinxes, obelisks and recumbent mummy displayed before lit candles and hieroglyphs, the picture combines scientific exploration and romantic exoticism.”

The second most recent haggada in the collection is the Asufa Haggada(99A) from 2013. A design shop in Israel has been asking young Israeli designers to produce a two page section of the traditional text of the Haggadah in whatever visual format they desire.  The most recent edition available is 2017; these haggadot naturally do not have a unified visual look, but a wonderful variety.  There is a Hallel page with cartoon characters by Miki Mottes and a Moses with a cat’s face by Yotam Kellner shown here.  Cohen says of this page that “Kellner approaches this venerable subject with surreal imagination, giving Moses the face of a cat (in part  a reference to viral internet cats), whose eyes shoot mesmerizing laser beams that update the [Gustave] Dore ‘beams of light’ emanating from Moses’ head.  Perhaps the most subversive is the transformation of the Tablets of the Law into the anniversary covers from a gritty Tel Aviv monthly arts magazine that Kellner cofounded, called Af(which the magazine plays with as both ‘Nose’ and ‘Knows’).”

We often think of much of Jewish life as being based on words but in fact, particularly on Passover, all our senses are involved in creating the holiday, with the music and the food being large components, as well as the toil to clean for it that our entire bodies must undergo.  But a book like Signs and Wonders shows that understanding why a story needs visuals  is central to our telling – and seeing –  of the story of the Exodus.