Syrian Refugees and the Need for Hope 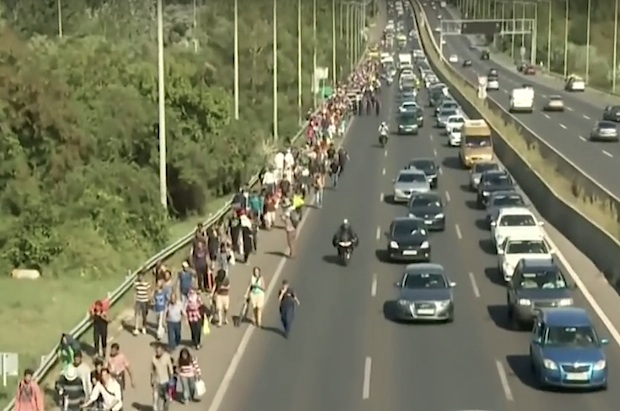 During celebration of the Jewish New Year, Rosh Hashanah, the Hebrew greeting L’Shanah Tovah means “for a good year.” But how can we possibly say it will be a good year with a straight face, when the U.N. predicts that the Syrian refugee crisis could escalate by year’s end to 4.27 million people fleeing Syria? After the body of a three-year-old boy, Aylan Kurdi, washed up on a Turkish beach, it seemed that the world finally woke up to the gravity of the humanitarian crisis.

However, it would be wrong to chalk up the greeting Shanah Tovah to willful ignorance, or blind faith. The traditional Jewish greeting? carries with it a message of optimism that’s necessary in good times – and, perhaps even more so, in bad times.

The late Abraham Joshua Heschel (rabbi, philosopher and civil rights leader) was once asked how he could remain an optimist despite the devastating tragedy and almost complete annihilation of his own family during the Holocaust. He responded that, in his youth, he was taught to appreciate “the mystery and marvel of human existence…This enabled me to stand a little bit above the circumstances of life and to take a perspective from which I could see the world, so to speak, from a higher point of view.”

The world is indeed a place of mystery and marvel, despite how it may sometimes seem.

In positive psychology, that “higher point of view” might be called transcendence. Transcendence is a human virtue consisting of a number of characteristics – among them, gratitude, appreciation of beauty, humor, spirituality and optimism.

Let’s explore the last, as that’s what many of us need in trying to come to grips with the enormity of the Syrian humanitarian crisis – or any of the critical issues our world faces right now.

Hope is powerful. It seems to be the crucial and necessary ingredient for human thriving. The power of optimism is summed up well by the Buddhist monk Thich Nhat Hanh, whose insight into the crisis of refugees is especially significant, as it was born out of the plight of the boat people displaced by the Vietnam war. “Hope is important because it can make the present moment less difficult to bear,” he taught. “If we believe that tomorrow will be better, we can bear a hardship today.”

To say Shanah Tovah, while nonetheless being fully engaged with the pain or difficulty of the present moment, is neither naive nor wishful thinking. Rather, it’s giving voice to the optimism necessary to see the world (as Heschel said) “from a higher point of view.” While we’ve been saying Shanah Tovah to one another during the holiday, we’re affirming that the world is indeed a place of mystery and marvel, despite how it may sometimes seem, and that we believe we’re up to the challenge of making tomorrow better than today. Shanah Tovah to one and all.