Seeking Meaning in the Wake of Tragedy 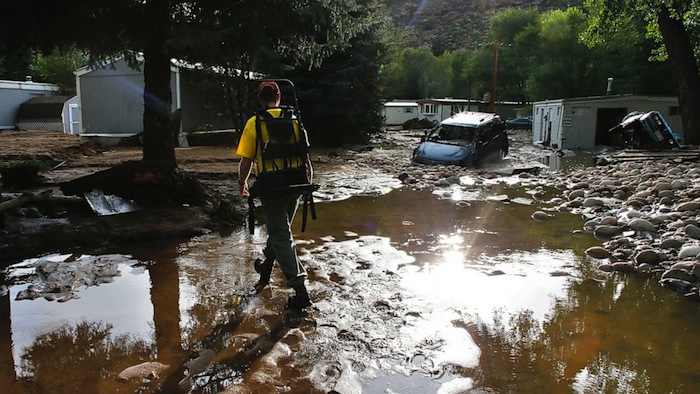 Does it make sense to blame devastating floods in CO on the fact that State House Majority Leader Mark Ferrandino and his partner were kissing in public, and that the Denver Post covered their kiss?? Pastor Kevin Swanson certainly thinks so, and so did his radio co-host Dave Buehner.? Could they be onto something?

Now before anyone starts screaming; let me explain what I mean, and why I think it may be useful to take their question seriously, even if I find their conclusion pretty much repulsive.

I start from the premise that statements such as Swanson’s and Buener’s are wrong, not because I don’t share their theology.? The fact is, people try to explain painful and seemingly senseless events in all kinds of ways.

In fact, the making of meaning, the finding of patterns, and the insistence on the purposefulness of life, are perhaps THE defining features of what it means to be human, and that is what they were doing when they made their claim that “a gay kiss = deadly floods”.? So as tempting as it might be to dismiss these two, or to rage against them, something more is called for.

It is precisely because I take seriously their effort to make order and find meaning where none seems to exist, that I hope they in turn, might seriously consider my concerns about their approach, which strikes me as both cruel and arrogant – something I imagine neither man really is.

It is the height of cruelty and arrogance to explain other people’s suffering in ways that comfort you, but not them.? And it is actually worse, to trade in the suffering of other human beings as a way to score political points.

There are as many ways to believe and to dis-believe as there are people out there, and fighting about that is usually senseless, especially in the immediate wake of a tragedy.? When people use other’s suffering as a tool in their particular cause however, however noble they believe that cause to be, something is terribly wrong.? Anyone who believes in any kind of real human compassion should know that, especially as they take to the airwaves while people are still digging out.