Rosa Luxemburg: The Fearless Radical Who Stood Up To Fascism Anywhere 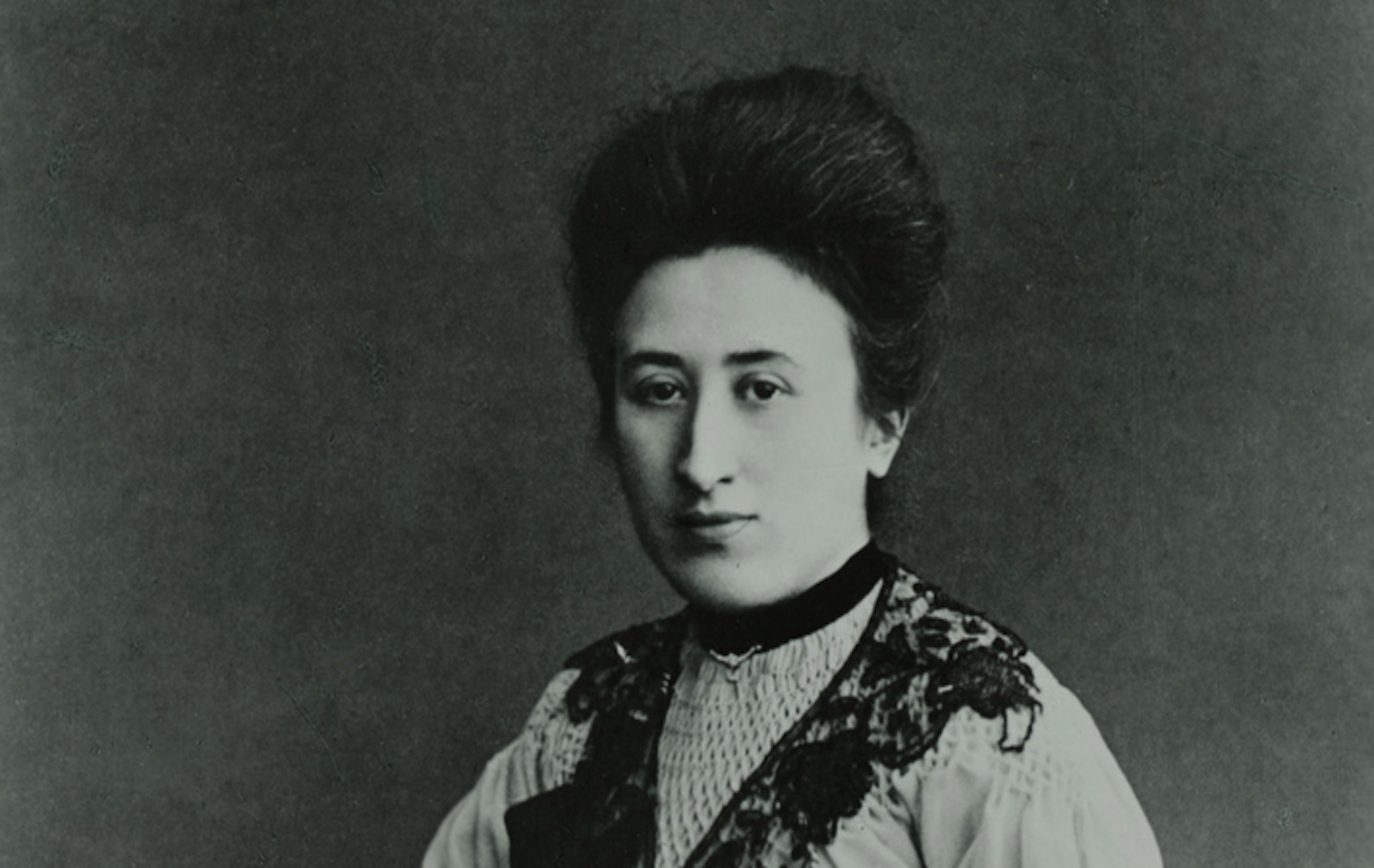 The most revolutionary thing one can do is always to proclaim loudly what is happening.

I was recently in Berlin where I was attending a conference. I arrived early and stayed a hostel in Mitte, a fascinating, bohemian neighborhood saturated in art, culture and history in what used to be East Berlin. Across from my window was the Volksbuhne, the “people’s theatre”, an imposing, almost surreal looking grey building with a small park in front, which looked half modernist and half Graeco-Roman. At night, an invisible projector lit up the outside of the building with huge black and white photos and German poems, creating a stunning effect through broadcasting the illuminated, humane words of poems against the gritty concrete.

Between my hostel window and the Volksbuhne was an entrance to the subway that read Rosa-Luxemburg-Platz, named after the Polish-German radical Rosa Luxemburg (1871-1919). I had a vague idea of who Luxemburg was, having read her quoted in some psychedelically dense and entertaining essay by Slavoj Zizek a few months before. I didn’t know much, other than that Luxemburg was a radical and one of the many incredible people whose lives were, and are, woven into the city of Berlin, several of whom who were, like her, Jews.

Studying Luxemburg introduced me to one of those people who, once met, one walks with forever. Luxemburg’s brilliance and force of personality are such that she has been praised in recent years by people as disparate as Zizek, a Slobenian Marxist, and Christopher Hitchens, who in his late years was a right-wing firebrand. Whether one agrees with every detail of her brand of Marxist thought or not is secondary to the impression one gets of her intellectual brilliance and the fierce dedication to justice and high ideals that permeated her life.

Those who do not move do not notice their chains.

That may be her greatest and most searingly true bon mot. As long we keep our heads and expectations down and do not question too much, we can remain quite comfortable and never notice how confined and dominated we actually are. Luxemburg struggled mightily against her chains, and she came to understand their shape well.

Rosa Luxemburg was the youngest of five children of a lower middle-class Jewish family in Poland. By the time she was in high school she was involved in underground activities, and in 1889, she fled Russia for Zurich. She received a PhD in law and political economy there, and became involved in the international socialist movement.  In 1890, Rosa Luxemburg met Leo Jogiches, a revolutionary known for his encyclopedic knowledge, debating skills and total devotion to the cause of justice. He became her friend and mentor, and later, her lover as well.

Bertram Wolfe, an American political activist, later wrote: “Physically, the girl Rosa did not seem made to be a tragic heroine or a leader of men. A childhood hip ailment had left her body twisted, frail, and slight. She walked with an ungainly limp. But when she spoke, what people saw were large, expressive eyes glowing with compassion, sparkling with laughter, burning with combativeness, flashing with irony and scorn. When she took the floor at congresses or meetings, her slight frame seemed to grow taller and more commanding. Her voice was warm and vibrant (a good singing voice, too), her wit deadly, her arguments wide ranging and addressed, as a rule, more to the intelligence than to the feelings of her auditors.”

Emile Vandervelde, a socialist from Belgium, was one of those who was very impressed by Luxemberg’s public speaking. “Her opponents had a great deal of trouble in holding their ground against her. I can see her now: how she sprang to her feet out of the sea of delegates and jumped onto a chair to make herself better heard.”

Luxemburg soon challenged both the Russian communists and the established Polish Socialist Party because of their support of Polish nationalism. Luxemburg was a lifelong enemy of nationalism, championing international solidarity in pursuit of freedom and justice for all. She and her colleagues founded the rival Polish Social Democratic Party, which was to become the nucleus of the future Polish Communist Party.

In 1898, Luxemburg moved to Berlin, where she quickly become an influential thinker and activist who informed socialist thought in Germany and beyond. Luxemburg was known for emphasizing a “bottom-up” transformation of society that would come from workers, for resisting tight party control of revolutionary activities, for resistance to war, and for her critique of imperialism as the exploitative expansion of capitalism into third world countries. She was also known for her feminism, writing, “Women’s freedom is the sign of social freedom.”

Luxemburg was not afraid to disagree with Lenin, who held a tightening grip on the Communist world in the early decades of the 20th century. In 1904, she warned against Lenin’s views on central control of the revolution and suggested that any successful revolution that used this strategy would develop into a dictatorship. Her words were chillingly prescient.

When WW1 broke out, many socialists abandoned their internationalism to embrace militant patriotism. Luxemburg rejected the war and founded, with her friend Karl Liebknecht, the Spartacus League, named after a slave rebellion in Rome led by Spartacus. The Spartacusbund was dedicated to ending the war through revolution and the establishment of a government by the people.

In her Die russische Revolution (1922; The Russian Revolution), Luxemburg chastised Lenin’s party for nationalism and dictatorial and terrorist methodology:

Socialism in life demands a complete spiritual transformation in the masses…. Social instincts in place of egotistical ones, mass initiative in place of inertia, idealism which conquers all suffering…. No one knows this better, describes it more penetratingly; repeats it more stubbornly than Lenin. But he is completely mistaken in the means he employs. Decree, dictatorial force of the factory overseer, draconian penalties, rule by terror…The only way to a rebirth is the school of public life itself, the most unlimited, the broadest democracy and public opinion. It is rule by terror which demoralizes.

Like Emma Goldman, Luxemburg was a thinker whose commitment to truth and justice led her to become a critic both of capitalism and communism as they existed in her day. Although she remained throughout her life a committed Marxist, calling “Marxian thought”  “the most stupendous product of the human mind in the century”, she was a fierce critic of applications of Marxist thought that were non-democratic or abused human rights.

Freedom only for the members of the government, only for the members of the Party — though they are quite numerous — is no freedom at all. Freedom is always the freedom of dissent. The essence of political freedom depends not on the fanatics of ‘justice’, but rather on all the invigorating, beneficial, and detergent effects of dissenters. If ‘freedom’ becomes ‘privilege’, the workings of political freedom are broken.

“Freedom is always the freedom of dissent” would become Luxemburg’s most quoted phrase.

Chaos broke out in the German government after their defeat in WW1. As various warring factions struggled for control, the Freikorps seized control of Berlin and declared that “order reigns in Berlin.”  The Freikorps were ex-soldiers and unemployed youth, nationalistic and radically conservative. They were employed unofficially to put down left-wing revolts and uprisings. They seized control of Berlin in 1919 and declared, “Order reigns in Berlin.” Luxemberg wrote in her notebook:

“Order reigns in Berlin!” You stupid henchmen! Your ‘order’ is built on sand. Tomorrow the revolution will already ‘raise itself with a rattle’ and announce with fanfare, to your terror: I was, I am, I will be!

These moving words with their Biblical cadence were the last words Luxemburg wrote. Because of their role in the communist uprising against the failing government, she and Liebknecht were arrested in Berlin on January 15, 1919, by members of the Freikorps.  That same night, both prisoners were beaten unconscious and shot in the head. Rosa Luxemburg’s body was thrown into the Landwehr Canal which now runs through Tiergarten, Berlin’s urban park, where there is a memorial to her. Karl Liebknecht’s body was delivered anonymously to a morgue.

The Communist parties Luxemburg helped found in Poland and Germany would themselves fall prey to the very “dictatorial” and “terrorist” methods Luxemburg so abhorred, abandoning her commitment to true “freedom of dissent” and democratic government at the same time they named Subway stations after her. Nevertheless, she lives on as one of the great political heroes of the 20th century, an incisive thinker and fierce warrior for justice, freedom and equality, or as she put it:

For a world where we are socially equal, humanly different, and totally free.