Rep. Lewis Is Wrong. Trump Is Wrong. One Of Them Needs To Fix This. 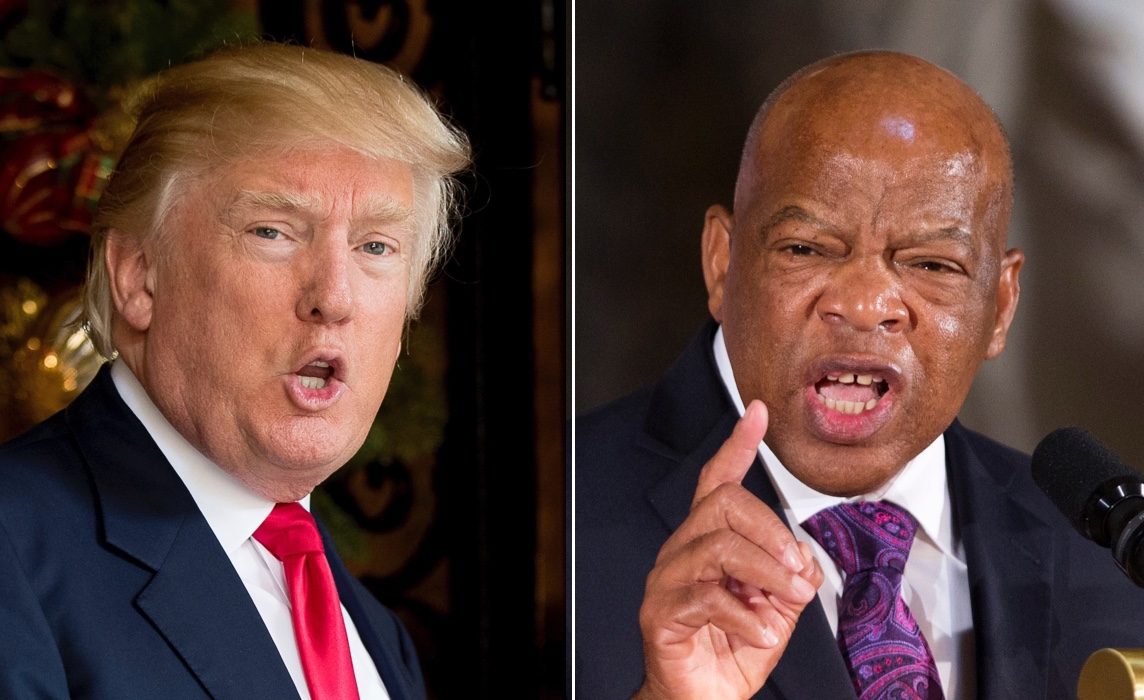 When I wrote about John Kerry and Bibi Netanyahu in a similar format a couple of weeks ago, it proved to be a useful way to share and explore a range of competing thoughts and feelings.  So, I am trying it again, but this time with a sadly negative twist – one which I find unavoidable, despite my usual preference for identifying more what is right in a situation than what is wrong.

I suppose I could accentuate the positive here too, but frankly I am too disappointed, disturbed and  concerned about the death spiral more and more elected officials are diving into these days, including those who have lead otherwise exemplary, and even heroic lives of public service.  And yes, I mean Rep. John Lewis, and yes, like millions of others, I regard him as a hero.

I remember the first time I heard John Lewis speak. It was well over twenty years ago.  I was at a national meeting in Atlanta, and even though I was just one of over a thousand people in the room, when Rep. Lewis took the microphone and addressed us regarding his vision for America and the role each of us could play in achieving it, I was as moved as if he were sitting in my living room and speaking to me alone.  And, while I have never spoken to him quite that intimately, I have had the privilege of sitting across a crowded dining table, over a cup of coffee from him, and it was no different.

How could it be the same when it is one-on-a-thousand as it is when it is one-on-ten?  The answer, I think, explains John Lewis’ greatness.  When he talks, he is totally authentic, completely straightforward, and genuinely engaged.  He is who he is – without pretense or self-importance. He tells it the way he sees it, and he truly means what he says.

Beyond the courage to stand strong, even as state troopers cracked his skull on a 1965 Sunday in Selma Alabama – clearly a huge deal – it is those straights, used in pursuit of greater human dignity for all people, which are the stuff of great and durable leadership.  It is also what makes his recent comments about the Trump presidency so disturbing.

However emotionally understandable to many his words may be, they actually run counter to his lifetime of good work and great service.  In fact, John Lewis is so wrong, that he is claiming that Donald Trump will not be the legitimate president and is refusing to attend Friday’s inauguration because of it.

However much Rep. Lewis may not agree with Trump, his comments are not a swipe at the President-elect, they are a swipe at the very democratic process for which Lewis has risked his life, and to which he has devoted his entire career.  However much he, or almost half of US voters may disagree with Mr. Trump, this was a free and fair election which Trump won by a pretty significant electoral margin.  That is about as legitimate as it gets, and, while questioning Trump or his policies is as much the lifeblood of democracy as supporting them, questioning the legitimacy of his presidency is quite the opposite.

Was the election perfectly fair?  Was there no voter suppression?  Were there malfunctions such that every cast vote was properly counted?  The answers to these questions are the same for this election as for every election in recent history – no, there was probably some, and almost certainly.  Just as those results, and the president who took office because of them, were legitimate, so too are these results and this presidency legitimate.

And please, spare us the lectures about Russian-sponsored leaks, fake news stories (both of which almost certainly occurred), and claims about the impact of FBI Director Comey’s comments regarding Hillary’s emails.  A, there is no way to prove the impact of any of those and B, poor losers always complain about the variables they could not control, but that is politics.

Believe me that I am saying this as much to myself as to the rest of you or to John Lewis: Get over it!  The people have spoken, whether we like what that majority have said or what informed their decision-making process.  That’s politics. And, more importantly, that’s democracy in action, including respecting people’s right to be swayed by forces beyond our control or approval, as long as they were not coerced.

That is what John Lewis fought for, and what we all must fight for, even, and especially, when the results may sting.  Anything less would make us rather like the segregationists who fought against John Lewis, Dr. King, and all of the heroes of the civil rights movement.  So, yeah, I hope John Lewis reconsiders both his self-betraying claims about the next president and his decision to boycott that president’s inauguration.

But, like I said, the President-elect is wrong also, only it’s less surprising from him.  I say that with no personal malice, just the awareness that lashing out at those who question him publicly has become standard operating procedure for Donald Trump.  A former beauty queen, the bereaved parents of a fallen US soldier who happens to have been a Muslim…the list goes on and on…and on and on.

We need not even analyze Mr. Trump’s tweeting out that John Lewis is “All talk, talk, talk – no action or results.” It’s such a bizarre combination of ignorance and arrogance, at best, and hateful lying at worst, that there is nothing there to analyze.  It’s actually kind of an embarrassment that the next, and totally legitimate, president of the Unites States would say such things, and even those closest to him are trying walk back those words—as well they should.

And let’s not forget the irony of the President-elect getting all bent out of shape in this case.  Citizen Donald Trump was a leading proponent of perhaps the ultimate fake news story of the past decade i.e. that Barack Obama was born in Kenya and therefore constitutionally barred from being the legitimate President of the United States!

Can anyone say “what’s sauce for the goose is sauce for the gander”?  How about my grandmother’s old favorite, “those who live in glass houses shouldn’t throw stones”?  Or perhaps you prefer the more arcane, “hoisted by one’s own petard” (look it up)?

Bottom line: Mr. President-elect, while you are correct about Rep. Lewis’ wrongness, you have managed to be at least as wrong, and clearly not as well-intentioned. So, yeah, you need to fix this.  This is where the “pick up the phone” part comes in.

We all suffer when our leading politicians behave badly, and while I do think that both John Lewis and Donald Trump are wrong here, the obligation to repair this problem lies with the President-elect.  That’s not motivated by anything partisan.  It’s motivated by power and the ethical use of it.

The President-elect is about to take over the most powerful office in our nation, and, arguably,  the entire world.  Power certainly brings with it all sorts of privileges, and our next president seems quite comfortable with those.  Such power also comes with obligations, and perhaps chief among them is the ethical sensibility that the more power one has, the more one is obligated to reach out to those with less of it.

It has nothing to do with who is right in any particular dispute.  It’s about who is better positioned to fix what is broken between the parties.  The exercise of that awareness is just one of the obligations which come with power, and what distinguishes the ethical use of power from simple demagoguery.  This is a perfect moment for the incoming Commander-in-Chief to demonstrate his command of those obligations.  One – at least this one — can only hope that he will do so.