When Being Out of Place Is Totally in Place 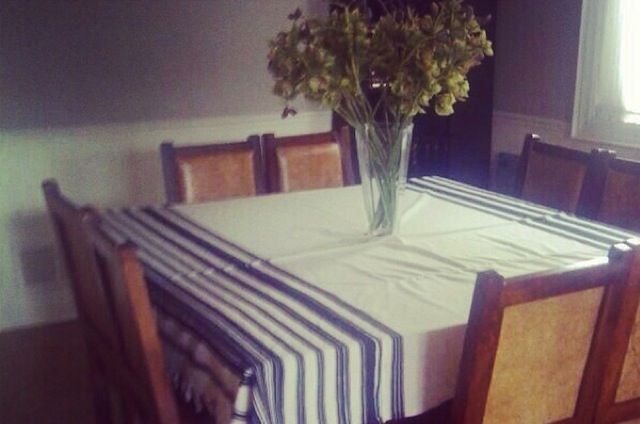 I received a picture and caption this morning and while very funny and specifically Jewish, it speaks to a deep wisdom about the benefits of being out of place, and certainly ones not limited to Jewish or even religion in general. In the picture a Jewish prayer shawl, typically worn at morning prayers, has been placed as a table cloth. The caption accompanying the image read, “This is what happens when your housekeeper set the table”.

The prayer shawl is typically worn in formal liturgical or religious settings. But by placing it on the table, rather than seeing it as a mistake, it could be seen as sending a message about the family table being every bit as spiritually and morally significant as any service in a house of worship. The so-called mistake makes a powerful claim that we can find the sacred wherever we carve out space for it, including, and perhaps especially at the family table.

As I look at this image, I do laugh about the “out of place” prayer shawl.? But I am also struck by the possibility that it is very much in place, especially for people trying to reclaim the family meal times as more than about getting fed physically.

What unexpected or “out of place” object might you place on your own table, say once a week, to signal the importance of the meal and its potential to deepen relationships between those gathered around it? How would its “out of place-ness” help convey that message in ways that words alone might not?

What other objects come to your mind, which could be used in new or unexpected settings, and in doing so, could help you unlock new levels of meaning in otherwise seemingly mundane acts? Rather than worry about where these things are “supposed” to be used, especially if in their typical uses they are largely ignored, as prayer shawls are, try some creative repurposing.

I can’t tell you which “out of place” uses will work, or which are “over the line”, etc. I can tell you however, that every traditionally sacred object with a clear and known place was once a newly and imaginatively sacred object being repurposed in innovative ways for new settings and audiences.

So while I am a big fan of using things in their “proper” places, I am also a big fan of the gift of out of place-ness, and power and meaning that come from tapping into the wisdom found there.