Inside the Lives of Single Mom Rabbis 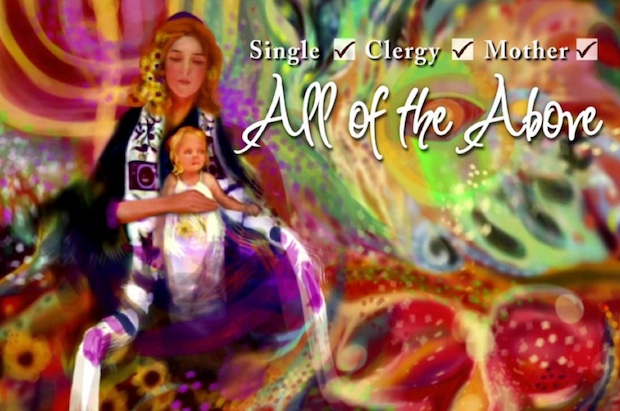 I just watched a documentary – called All of the Above: Single, Clergy, Mother – that touched my heart, mind, and spirit. In the movie, three rabbis and a cantor, each raising kids, describe with remarkable vulnerability their candid experiences pursuing the choice of single motherhood. All of the subjects of the film are successful and prominent in their communities and of course, for any woman, the decision to become a single mother is complicated.

Their four narratives vary in poignant ways, but in eloquently revealing personal physical, emotional, and financial details about the process, we feel the loss, joy and triumph of old dreams surrendered and new dreams realized. The film sensitively (and wisely) challenges us to enlarge and enrich what makes for a spiritual, moral role model as it gently invites us with raw intimacy to internalize the truth that there’s no one single viable model of family.

Labels like “non-traditional” and “alternative” simply don’t do justice to the overwhelming love and gratitude and responsibility witnessed in these women’s decisions and in their families.

Toward the end of the film, Rabbi Felicia Sol reflects, “You don’t get the picture-perfect life dealt to you on a silver platter.” She adds, “Everyone, in their own way, has to plow through their life with some sense of faith about what’s possible and who they’re meant to be in this world and what’s asked of them. I thought I was going to get it all. I didn’t in the way I thought I was going to get it, but I’m blessed with more than I ever imagined I would be.”

There’s much wisdom in All of the Above. Kudos to Dr. Debra Gonsher Vinik, Emmy award-winning founder of Diva Communications, who produced and directed this riveting look at four role models who also happen to be single mothers. Watch a trailer for the movie below (and stream the film here):