Love, Money and God: Our Week in Wisdom 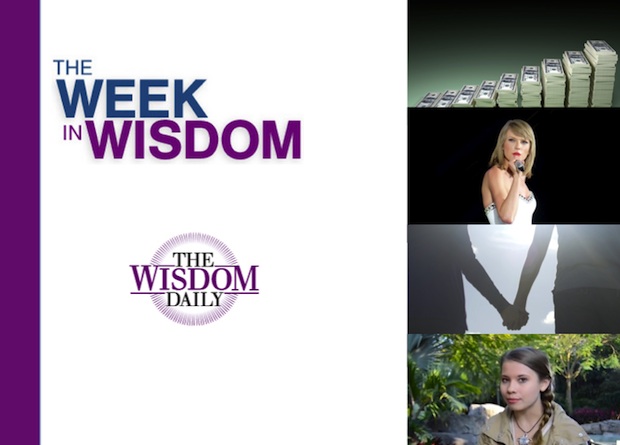 On The Wisdom Daily this week (August 10 – 14), we discussed how a pop star’s thoughts on love sparked wisdom on why love should change us, the fallout from the $70,000 minimum wage mandate employed by one CEO, the emerging reports about ISIS and more. Did you grow wiser this week? We hope The Wisdom Daily played a part.

Taylor?Swift was quoted in the September issue of Vanity Fair about the one thing she demands in a mate. “If I found someone who would never try to change me, that would be the only person I could fall in love with,” Swift said. “Because, you know I was in love with my life.” READ MORE

It made headlines when Dan Price, the CEO of Gravity Payments announced that his company would establish a $70,000 per year minimum wage. Part of what made the story so compelling was that Price committed to helping fund at least the first year costs associated with that move by cutting his own salary to $70,000… READ MORE

Dating is a process of being open and closed; open to letting a stranger become significant, closed to the immediate discomfort of the moment. The discomfort of being judged by our appearance or job title, the pressure of keeping up a conversation… READ MORE

Evil Done in the Name of God?- Brad Hirschfield

This week, reports of the systematic use of rape, slavery and sex trafficking by the Islamic State emerged. There are those who have always used religion to justify unacceptable behavior but in the wake of these reports we can never say again that we didn’t know what was happening… READ MORE

This week’s must-read links feature insights about well-meaning condolences, the power of nature to emulate or replace religious traditions, the imagination required to truly understand the past, the empowering people you want to surround yourself with…?READ MORE