The Subtle Lesson of Zootopia: Slow Down 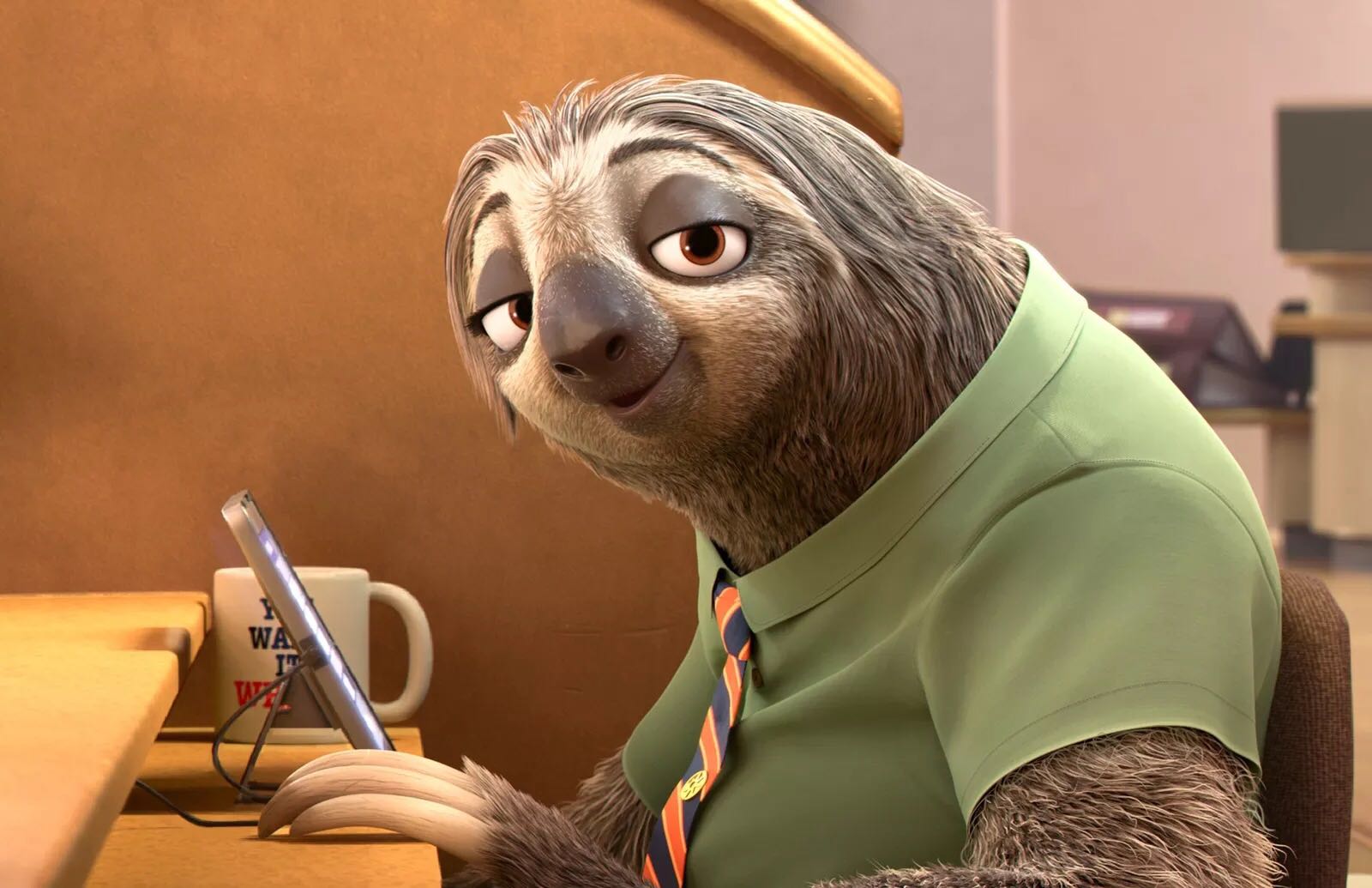 I’ve been thinking about Zootopia ever since I saw it in March, but not for the reasons one might expect. The clever and heartwarming film celebrates what can happen when anthropomorphized animals, inhabiting and running a city without humans, can move beyond the predator-prey dichotomy to collaborate, cooperate and even fall in love. The scene that sticks in my mind? When the protagonist, Officer Judy Hopps, a petite bunny determined to prove herself in the overwhelmingly larger mammal police force, and her sidekick, Nick the Fox, visit the Department of Motor Vehicles to run a license plate. They are hot on a case. Time is of the essence. Which is why the audience burst into hysterics when Officer Hopps sees that the DMV employees are sloths (watch the scene here).

For the fleet of foot or fast of tongue, the scene might be painful to watch. Precious minutes elapse while we wait for Flash, the sloth behind the counter, to complete a sentence. Officer Hopps tries to put words in his mouth in order to hurry him, and the process, along. To Flash’s credit, he has none of it. In his peculiarly and adorably slow way, he finishes his thoughts. With the words he chooses. At his own pace. He even repeats a joke to a sloth co-worker which seems to take forever, given the urgency of the situation.

As an introvert who needs time to formulate and express my thoughts, Flash is a quiet hero. Ever since I can remember, I have often struggled to get a word in edgewise in conversations where speed of repartee is valued more than inclusivity. More often than I can count, I’ve been talked over and interrupted by people who interpret a pause in my speech as the end of my comments. My need to take a breath represents a comma, not a period. Once a conversation has raced ahead to a new topic, it’s challenging and awkward to chime in with a response to what happened five minutes before. Often I’ve opted for silence instead. Neither choice is ideal.

I’m not sure where or when our society got the idea that silence is dead space that must be filled, with either chatter or digital distraction, or that our individual agendas are so important that we can’t bother to allow another to finish their sentence the way they wish. Perhaps the advent of talk shows and news hours where participants often speak at or over each other, rather than with each other, encouraged the population to mimic verbal sparring, where winning is more important than connecting. Sometimes it can be fun to get into a fast paced debate, but that model isn’t always effective.

All I know is that to interrupt another person is, in most cases, impolite if not disrespectful. To repeatedly interrupt is to assert dominance or privilege, if not the worldview that time or a particular task is more critical than the human being in front of you. More subtly, to interrupt might also be a way to avoid the discomfort of one’s own impatience, anger or anxiety, including the physical sensations that might arise. While an elevated pulse can signal that we’re in danger, often it’s manufactured by our egos, intent on having us follow its demanding script and pace, rather than the slower, softer and perhaps nearly imperceptible messages of our hearts.

Slowing down to hear ourselves fully, and therefore others, is not easy in a culture that worships speed and instant results. It wasn’t until I stumbled into a Feldenkrais Awareness Through Movement  lesson, where a teacher led the class through small movements at a pace mimicking that of Flash the sloth, that I really learned what it meant to slow down, more so than what years of meditation and yoga had taught me. Moving gradually but precisely on the floor for 45 minutes made it clear how ingrained are my habits of rushing, exerting, and straining, even if my words come slowly. The experience not only allowed me to move with greater ease once I stood up, but also reminded me that I have a choice about the speed at which I live life.

Back to Zootopia. The heroine eventually gets the plate number from the sloth and cracks a difficult case. Had she not interrupted him, she might have received the information a few minutes sooner. Often it pays to let life unfold without hurrying it along. In the end, that might even be faster.