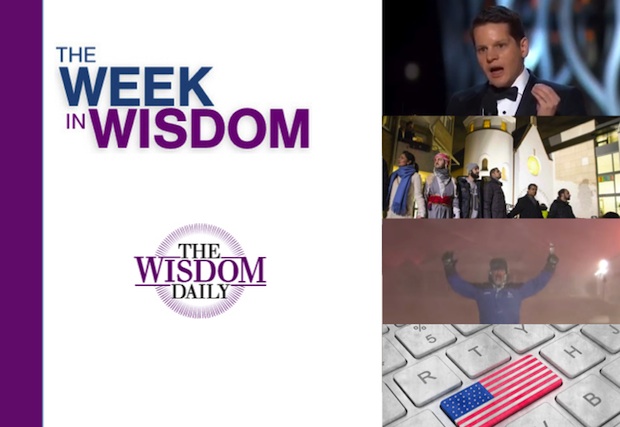 On The Wisdom Daily this week (February 23-27), we celebrated a Hollywood insider’s plea to “weird” outsiders, a job made joyful by Mother Nature, a U.S. veteran’s exemplary self-awareness, a young Muslim’s civil rights and the unique acclaim earned by Birdman. And we also thank guest writer Michael Bernstein, whose post revealed new insights about a famous peace demonstration in Europe. Did you grow wiser this week? We hope The Wisdom Daily played a part.

What does it mean to build a holy place around us? In Oslo, Norway, the true power of building a holy place together was on display this weekend as hundreds of Muslims responded to a call to join hands and surround the central synagogue with what organizers dubbed a “Peace Ring.” READ MORE

Finding the Joy in Your Job – Irwin Kula

How excited are you about your job? Watch this recent clip of Boston weather reporter Jim Cantore experiencing repeated strikes of “thundersnow” and you’ll see an adult expressing childlike zeal about his job assignment in a way that can’t help but make you smile. How often does a Weather Channel segment go viral like this one has? READ MORE

“When I was 16, I tried to kill myself.” As one who lost a beloved relative to suicide almost exactly one year ago to the day, I was touched more than I can say by those words, uttered so gently and so sincerely by The Imitation Game screenwriter Graham Moore as he accepted his Academy Award… READ MORE

An Exchange with a Hero – Irwin Kula

There’s much about social media that degrades conversation and exacerbates polarization. But, like every technology, it also empowers us and offers opportunities to speak across boundaries and borders. Tim Byrd, a veteran of the war in Iraq who fought in Mosul, is a juvenile corrections officer in Washington state, a husband and a father of five… READ MORE

You may already know that Alejandro Gonz?lez I??rritu’s film Birdman – named Best Picture at the Academy Awards – is the second-lowest-grossing movie to ever win that honor. Meanwhile, of the roughly $650 million in box office from all films nominated this year in that category, $320 million of that was earned by American Sniper… READ MORE

From Odyssey Networks’ Faith on the Record series: This week, the U.S. Supreme Court heard a controversial case brought by a young Muslim woman from Tulsa, Okla., against retail giant Abercrombie & Fitch. Samantha Elauf’s attorneys claim she was discriminated against as a job applicant because she wore a hijab… READ MORE