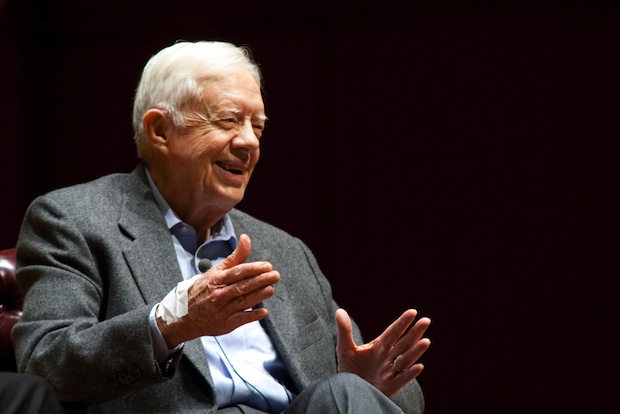 Currently, the front-runners to win the presidency in 2016 include a Republican who has essentially bragged, “I buy politicians and they do what the hell I tell them to,” and a Democrat facing criticism about emails and allegations of using her position to lure donations to a global philanthropy affiliated with her family’s foundation. In light of that, Jimmy Carter’s recent press conference informing the world he’s battling cancer was a reminder that, at least once in recent American history, someone held power without corruption.

But the 39th president’s announcement was much more. It was a wisdom teaching on how to respond? – with equanimity, intelligence, integrity and humility – after being told one has incurable cancer. Rather than protect the dignity of his former office by shielding the truth of his vulnerability (unlike FDR, who never wanted to be photographed in his wheelchair), listen carefully to Carter’s honest and honorable news conference:

“I’m perfectly at ease with whatever comes…I think I have been as blessed as any human being in the world…So I’m thankful and hopeful…Now I feel this is in the hands of God…I’m ready for anything, and looking forward to a new adventure.”

What makes Carter so able to contextualize his particular devastating news into a broader view of life that enables such magnanimity and dignity?

A meaningful life, a flourishing life, lies not in what we acquire but in what we give away.

I have been privileged to sit at the deathbeds of some two dozen people, of all ages, including my own parents. There is no more powerful moment than being in the presence of, and holding the hand of, someone dying. There is no lying at the end of life. No one knows better than the person dying whether he or she has lived with purpose and meaning. And how one passes from this world to the next, with bitterness and resentment or grace and love, has much to do with how one lived in this world.

The bravery, modesty, courage and generosity Carter exhibits at the end of his lifetime is a consequence of having practiced these virtues during his lifetime. He has embodied the understanding that a meaningful life, a flourishing life, lies not in what we acquire but in what we give away, as we can never lose what we give away – it is the principal on an investment that lasts forever. Enduring happiness points outward, and life satisfaction is less a consequence of what we have than what we have sacrificed for others.

Carter was probably the most underrated U.S. president of the 20th century. He created the first energy policy establishing the national oil reserve and the first solar energy structure, he brokered a peace between Israel and Egypt that has lasted to this day, and he was the only president since WWII not to send our military into war illegally. And Carter has surely had the noblest post-presidency: creating Habitat for Humanity, traveling around the world advocating free elections, negotiating peace accords between warring factions, winning the Nobel Peace Prize, guiding the Carter Center toward astonishing public health achievements in the effort to end world hunger and disease, authoring thought-provoking books and regularly teaching Sunday school in his hometown of Plains, Ga.

Together in loving and respectful partnership with his wife of 69 years, Roslyn, he has literally saved the lives of millions of people.

President Carter seems to have known in a deep, life-directing way (at a point long before many of us realize it) that our time is limited and so we best not waste it living someone else’s life, but instead, have the courage to follow our heart and intuition. He has given immensely more than he has taken in his 90 years.

Human beings with grave diseases don’t tend to slink off into a dark corner to die away from a community of love and support. We share a common end, however it may come about, and there’s comfort and lessons to be learned in knowing how others handle their experiences. Carter has reminded us that the meaning of our death is intimately related to the meaning of our life.

By acting tirelessly to serve those most in need, and by speaking to our better angels on poverty, vulnerability, disease, democracy, racism and peace, Jimmy Carter has been a faithful witness that life – each of our lives – in this vast, seemingly impersonal cosmos does indeed make sense. At least it does when we realize, with fierce grace, the purpose of the life with which we’ve been gifted. Carter has modeled a good life. Now, he is modeling a good death. May he go from strength to strength and may he be comforted that it’s given for very few of us to know that if one dies tomorrow, the world will celebrate a life so well lived.