How Terrifying Crimes of Hatred Shape Our Culture 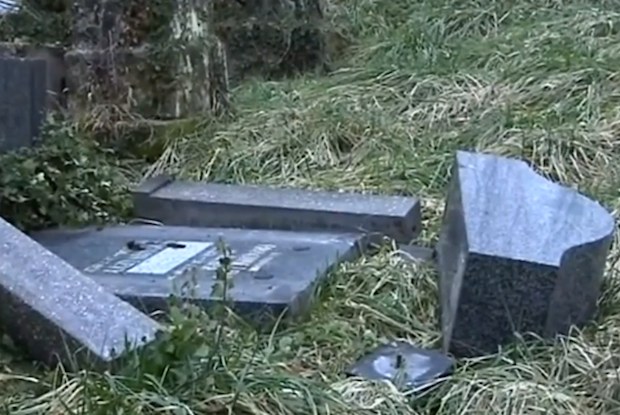 They did not know it was a Jewish cemetery. They did not intend it to be an act of Antisemitism. So explained five boys in France after they turned themselves into the police. The teens had vandalized the cemetery, upending hundreds of tombstones and spray-painting swastikas.

Let us suppose it is possible that their naivet? is genuine. If what they say is true, then without specific malice towards Jews, these five, aged 15-16, chose a random symbol which just turned out to be a sign of Aryan power and hatred towards Jews. Nor were they aware that the tombstones marked the graves of Jews. Sure they knew it was bad, and they’re willing to admit they were up to some mischief, but by no means were they out to make national news as Antisemites.

When a systematic pattern of hatred has been entrenched over generations, it is impossible to remove a single event from that context.

If is it is hard for you to believe, that is understandable. Even if their naivet? were believable (which it is not), the context in which their actions took place moves it from being an isolated act of individuals to part of a broader narrative of hatred. Their actions are framed by hundreds of years of desecrating Jewish cemeteries in Europe, Nazi atrocities in 20th-century European countries and the current wave of small and large acts of violence towards Jews in France and across the continent.

Whether these boys intended Antisemitism or not, it is impossible to remove this incident from the history and contemporary reality in which acts against Jews are in part of a systematic ongoing hatred against Jews.

When a systematic pattern of hatred and discrimination has been entrenched over the generations, it is impossible to remove a single event from that context. The pervasive denigration of another group contributes to the permissibility of action against that group, the use of particular symbols or tropes in acting out. That these boys painted swastikas instead of smiley faces is no random act.

Recently in Mississippi, as three young white men were sentenced for beating and then driving over James Craig (an African American), U.S. District Judge Carlton Reeves provided historical context for this heinous crime. His thoughtful and painful look at the role racial hatred has played in that state made it clear that no amount of general good behavior or church involvement on the part of the perpetrators could lessen the meaning or impact of this crime. As they drove over and killed Mr. Craig, they yelled about White Power. This was no random act.

Similarly, when three Muslim American students were shot in cold blood last week in their home in Chapel Hill, N.C., it was hard to see the act as distinct from the culture of Islamophobia that exists currently in the United States. That Yusor Mohammad Abu-Salha, 21; her husband, Deah Shaddy Barakat, 23; and her sister, Razan Mohammad Abu-Salha, 19, had disagreements about parking with the alleged murderer (their neighbor) has been established. But we cannot remove that dispute, or the neighbor turning up to game night with a shotgun in hand to shoot three innocent people in their home, from the general negative vision of Islam that’s commonly acceptable in many quarters.

Persistent communal hatred is frightening on many levels. It is not easily banished. It seeps into our day-to-day. When we knowingly – or even unintentionally – contribute to narratives of discrimination against people with different colored skin, religions, sexual orientations or abilities, we contribute to creating a broader culture of communal hatred. My Jewish tradition teaches the need to be vigilant and think about how we act and treat the other, for there’s no room for claims of naivet? when it comes to acting in or contributing to a context of hatred.

This post originally appeared on the blog My Jewish Learning.

Rabbi Ruth Abusch-Magder PhD. is the Rabbi-in-Residence at Be'chol Lashon and the editor of the blog Jewish&. A culinary historian and mother of two, she lives and meditates in San Francisco.