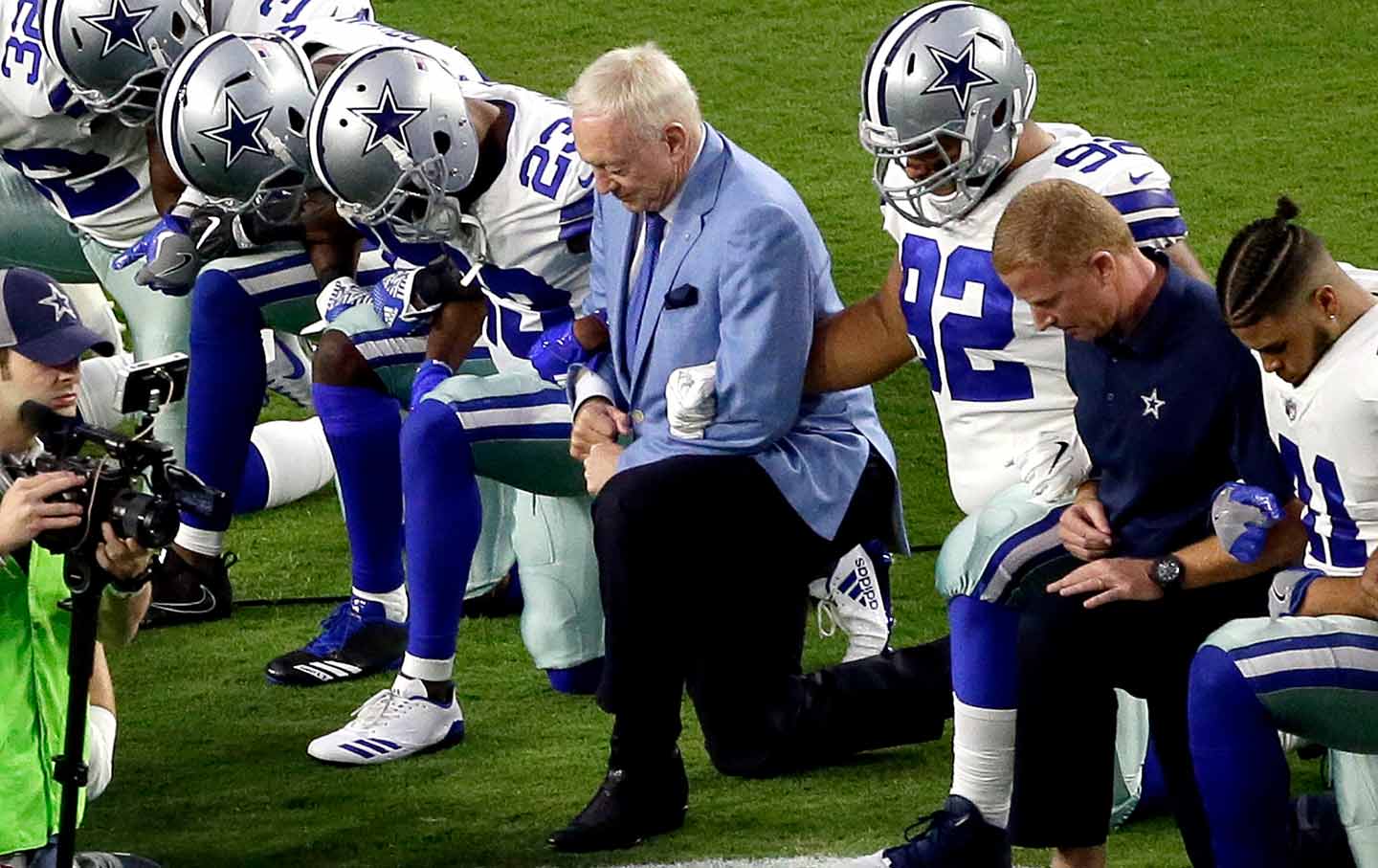 With these words James Baldwin lays bare the stakes of losing hope and makes explicit that, while some bear the brunt of the immediate threat, the consequences will touch all of us. They have resonated for me as I think about the waves of different responses to what began as one man’s decision to interrupt a regularly scheduled expectation.

When Colin Kaepernick first protested during the Star Spangled Banner, he didn’t do it to be in solidarity with other football players. He, and later his teammate Eric Reid,  were moved by what happened to black people like Alton Sterling and Philando Castile who were killed, each under different and heartbreaking circumstances so egregious that they were enough for then-candidate Donald Trump to call “disgusting and terrible.” Kaepernick had already been outspoken on the issue, angered as a list of victims’ names multiplied like a horrific,  never ending, hurricane season.  Except without widespread calls for relief.

The eventual decision to kneel was a posture chosen as a solemn gesture, “like a flag flown at half-mast to mark a tragedy.”  Reid shared these words this week in an editorial in the New York Times in which he lamented both the injustices that he perceived and what he saw as an undeserved response, particularly to Kaepernick, who initiated what was a lonely stance.

Of course this past weekend the gesture was taken in anything but solitude. A great many players, and some owners, kneeled or showed solidarity with those who chose to kneel after the President lashed out against the issue.  It became predominantly about the right to protest, and where and when protest is acceptable.  Somewhat lost by both detractors and supporters was that the original stand was not harmless and unobjectionable.  Choosing the occasion of the anthem and the backdrop of the flag was not meant to disrespect the military, but it was meant to challenge America. And, leaving aside the question of patriotism, any conversation about race, especially the role that  law enforcement plays and aspires to play cuts even deeper.

The power of a protest is to disrupt. To interrupt expectations of what matters and what doesn’t.  A person is not just or laudable just because they protest, as Charlottesville certainly proves, but the power of protest is a necessity to make sure the pursuit of justice is not replaced by insistence on obedience.

The irony of a protest is that it can articulate  what it is against much more clearly than it gives voice to its own demands.  And yet, a protest is an irreplaceable form of expression because, for every permit a democracy allows, only without permission can one challenge injustice and insist that the forgotten be remembered.

James Baldwin, speaking from his blackness and his sexuality in an America that welcomed neither, made  “a plea for the recognition of our common humanity, without which our common humanity will be proved in unutterable ways.”   Even as they risk being drowned out by backlash and pious agreement alike, we must face difficult conversations with renewed urgency.   A society that hears no plea for treating all human beings as precious is a society in which violence will know no bounds.  I pray that Baldwin’s optimism, forced as it was, can teach us that even more than our arms may or may not be linked, our futures are.