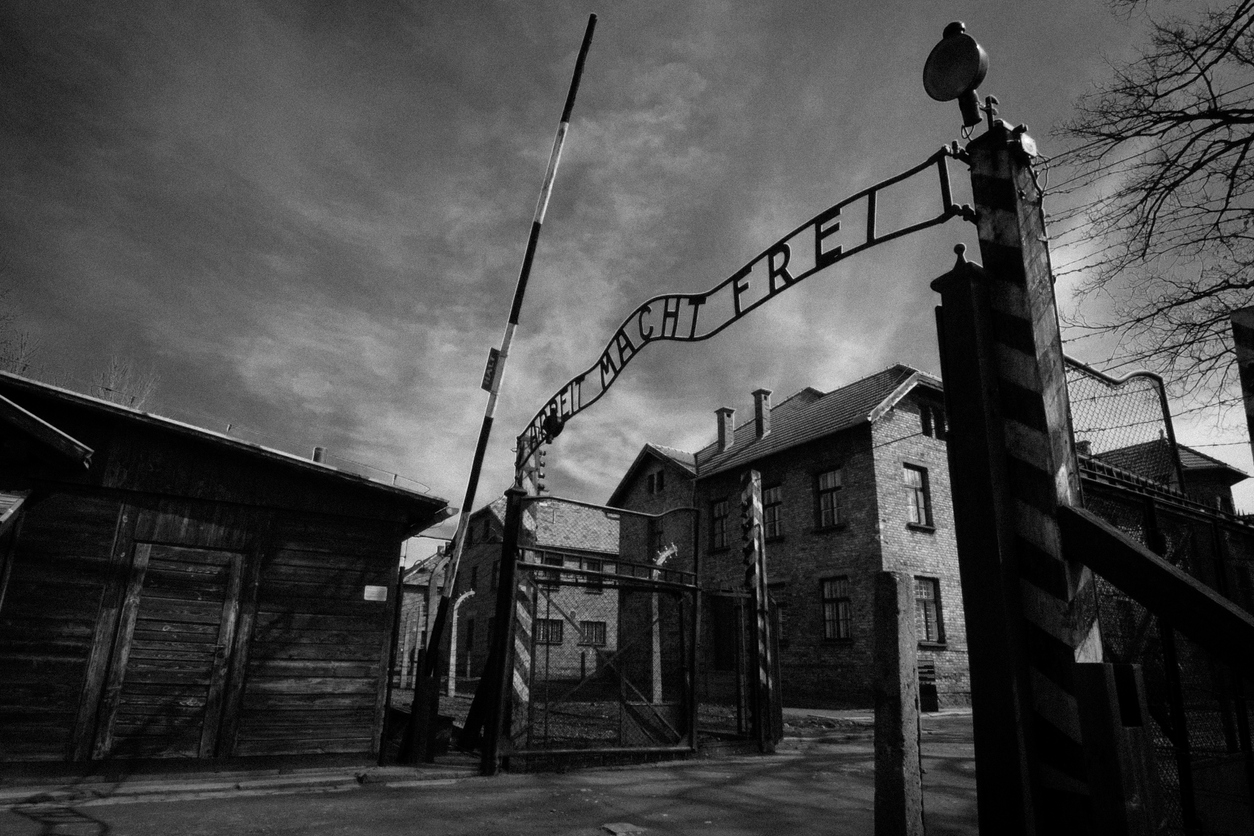 Eva (Gryka) Kohan is a 99-year-old Holocaust survivor. During evening roll call in Auschwitz, they were each given one quarter of a slice of bread. Knowing they would not get another portion until the next evening, she and her sister put away half of their ration – a mere ?…? of a piece of bread. They somehow controlled their hunger and saved the other half for the morning. The ration they had put aside gave them the strength to continue their work day.

Their friend Rachel, just a young girl herself, ate her entire portion every night. This left Rachel with nothing to eat the following day. Their friend became more and more emaciated and was ultimately sent to the gas chambers. Eva and her sister survived.

Eva does not attribute her survival to her own courage or discipline. “There were many times I was supposed to die, and my death just kept being avoided, miraculously. For example, once my entire group was written down to go to the gas chambers, and by a miracle, my number just wasn’t there. Every other person around me was sent, but my number just wasn’t written down on their sheet. It was not my strength, my smarts, or my connections. It was the hand of God alone.”

Eva was from a small town in Poland called Wohyn. Her father owned a grocery store next to their apartment which her mother helped run. Eva was the youngest of six children, and only she and her sister survived through the war.

“When I was 17 years old, on September 1, 1939, the war broke out. Eight days later, the entire Jewish area was firebombed, and every Jewish home was burned down. In moments, our lives were transformed drastically; people were lying on the streets, homeless. We had nothing.”

The SS had picked up a maintenance guy that was always around Jewish people. He was friendly, and even knew how to speak the Jewish lingo. But he turned on the Jews, and showed the Nazis exactly where the Jewish area was and exactly which houses to bomb.

Soon after the attack, the Nazis forced young people to perform Polish labor. “I was sent to work on a farm,” Eva explained. “Eventually, we lived in the rafters of a barn. There were fifty cows living below us, and the stench was unbearable. My sister also worked on another farm. I had no family members with me. We considered ourselves lucky because getting jobs like these required connections.”

The Nazis sent Eva’s parents and brothers to the gas chambers of Treblinka.

From the farm, Eva and her sister were taken to Majdanek, a concentration camp in Poland, near Lublin.

“My first memory of Majdanek was seeing a 16-year-old girl trying to run away. Right away, the SS wanted to show us that this cannot be done. They hung the girl in front of us, forcing us to watch. They let her body hang there overnight. She was such a beautiful girl.

“My brother, Moshe, was also in Majdanek. He was working with the commander, and somehow had a comb. He risked his life to pass the comb into my hand when the commanders passed by. It was not a regular comb; it could also take the dirt out of one’s hair.

“One day in Majdanek, I saw a group of small children with barbed wire containing them in a small area. I thought to myself, ‘I wonder if the children of my sister are there,’ but of course, to no avail. A few days later, the whole group of children disappeared. We realized then that the barbed wire pen was a holding ground for the children until they had space for them in the gas chambers.”

Eva and her sister were in Majdanek for about three months when the Nazis needed to liquidate. They were all sent to Auschwitz.

“I don’t have to describe what happened in Auschwitz. They shaved our heads, tattooed numbers on us, stripped our clothing off. Then began the selections: Who will live, and who will die. They assigned us to a barrack. We were like sardines on the boards they called beds. It was just so cold; we could see the ice on the ceiling in the winter.

“Somehow I passed through lots of selections. It was as though their eyes were blind when they saw me. Twice, I escaped Josef Mengele. The first time I encountered him, he let me through. The second time, I was hiding in bed and the nurse didn’t see me. I think she looked away purposefully when searching.”

Headcounts became a daily part of life for Eva. “Every evening, they would count us to make sure no one disappeared. One time, I was so sick that I could not stand on my feet any longer. There was a chair up against the wall. If you were ready to die, you sat in the chair. The chair meant that you would taken be to the hospital, which was merely a holding ground until there was room in the crematorium. I went to the chair. I knew what was going happen. I was going to be killed but I didn’t care anymore. So I sat and I knew my life would be over soon.

“But that was not God’s plan. It was meant to be that I would live. I went to the hospital, there was lice everywhere. I scratched my skin so much that it was maddening. I should have been sent to the crematorium but my sister had somehow made connections in the camp. Through the help of a nurse, she got me out. I would never have survived without my sister.

“In Auschwitz, if you got close to the gate, you were killed. A new transport of people were almost always waiting outside the gates to get in. The line was two blocks long, and they had no idea that they were next in line for the crematorium. They naively thought they were waiting to get jobs. The Nazi’s couldn’t burn us fast enough. There were too many Jews for the the amount of ovens, and people always had to wait.

“I had the the smell from the flesh in my nostrils for years and I could not rid myself of it.

“My dear friend Rachel, who ate her bread up quickly, slowly became sickly. She was such a beautiful girl. Her cheeks were pink and full of life, but slowly her cheeks started becoming purple. She couldn’t help herself, regarding the bread; she was hungry.

“One day, the commanders were doing selections. They used a big barn with two doors. One side was the entrance, and the other was the exit. They stripped us, and we had to wait to see if they would write down our numbers. If they wrote my number down, I was dead. Sometimes, just because they didn’t like the way a person looked, they would write their number, and that was it – they would go to the crematorium. Rachel went ahead of me that day, and when she came out, she called, ‘Chava, Chava [Hebrew name for Eva], they wrote down my number!’ I knew what would happen next, but I wanted to make her feel better, so said to her, ‘Maybe this time they wrote numbers of the people who will survive.’ But we both knew it was the end.

“Rachel knew she would be summoned to death, so during roll call that evening, she hid under the bed. We stood in line for extra hours because she was hiding. If one person was missing from their records, they would make us all stand until the person was found. Eventually, they found her and she was never seen again.”

In the end, Eva and her sister were transported to Bergen Belsen. Once there, Eva cleaned the toilets in exchange for another bowl of soup each day.

In Bergen Belsen, Eva saw a new transport of townspeople from Hungary who came in late 1944. They had bread in their baskets when they arrived. She called out from inside the gate to the entire group, “They are going to take everything away! Throw it here over the gate. I’m telling you, they are going to take it away from you anyway.” Only one person threw bread over, and Eva grabbed it. The Gestapo at the gate saw that she picked up the bread and hit her in the head with his baton. “I fell to the ground and blacked out. When I woke up, my bread was gone. That hurt more than the injury itself. That was Bergen Belsen.”

Finally, on April 15, 1945, the camps were liberated. The soldiers came in trucks and called through microphones “You are liberated! This is the English Army – now you are free!”

One woman was dying on the ground beside Eva. Eva kneeled beside her and said, “Look, take some coffee, put it in your mouth, you’ll be okay,” but she still died. People were dying left and right, from typhus, starvation, and other diseases, but her body was immune because she had contracted typhus a few years earlier. She walked out of the camp a free woman.

When asked how she had the strength to maintain her religious beliefs when so many survivors turned away from God, Eva explained, “The reason my faith is strong is because I believed that it is because of God that I survived. There was no other explanation. None. Not because I was smart or savvy, just God – it was all in His hands.”

Sarah Pachter is a dynamic, motivational speaker who has lectured throughout the US and Israel. For the past fifteen years Sarah has taught women of all ages and levels of Jewish observance, drawing in large crowds with her innovative and personal touch. Sarah has been featured on the Radio, is a regular columnist, and a freelance writer for the Jewish Press, Aish.com, Ami, The Jewish Home as well as many other publications. She has authored Small Choices Big Changes published by Targum Press. She currently resides in Los Angeles with her husband and four children.