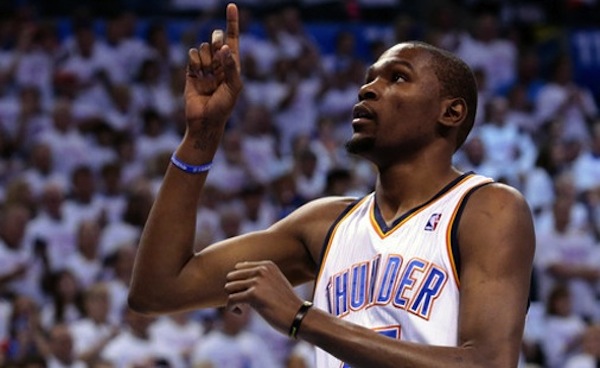 At an NBA Oklahoma Thunder game you can expect the usual hoopla of lights and noise and dancers. But for at least a couple moments preceding each game, the lights are dimmed and people are asked to rise as the arena is turned into a mega church and a local minister or priest (and very occasionally a rabbi or Native American spiritual leader) offers a stadium wide prayer to God – “non-denominational” of course. The Thunder pre-game prayer tradition began a number of years ago with an owner promising that if he got a “coveted” multi-million dollar NBA franchise he would honor God by beginning every game with a public prayer. He got the franchise, kept his vow, and instituted this pre-game prayer. As the team moved between Charlotte, New Orleans, and eventually Oklahoma, the Thunder preserved this tradition. The pre-game prayer is clearly a way for an organization in a heavily traditional Christian area to demonstrate it shares “the community’s” values and surely it’s not lost on ownership that it is an astute marketing technique to invite a minister of a church that may have thousands of members to stand in the spotlight at center court and offer a prayer.

Using religion to sell stuff is nothing new nor is employing religion to pump up the home team with a sense of specialness, superiority, solidarity and confidence – and in this respect it is definitely better to give our sports team a sense of chosenness and triumphalism than many other groups in which we human beings organize ourselves. Moreover, as a pluralist I leave open the possibility especially given that the Thunder presently have the second best record in the NBA and have sold out 145 consecutive home games that it could indeed be that prayer is working in Oklahoma. And as a forlorn fan of the NY Knicks – a team having its most disappointing and worst season in decades in one of the most secular and “sinful” cities in the country – I do need to be humble about the efficacy of prayer in basketball.

But I am curious about the sort of god people imagine cares about jump shots, rebounds, three pointers and dunks (okay I’ll leave out personal fouls and steals)? Does this god make officials miss fouls by the home team and call that controversial double dribble on the opposing guard? Does this god overlook the profanities uttered by the Thunder but not by team they are playing? Does this god hear the silent prayers of the other team’s fans? And how does this god feel about scantily clad Thunder dancers, sponsored by Hooters, cheering for made free throws by the home team? What sort of god is interested in prayers offered primarily by the majority culture that inevitably make a small minority of people feel excluded? And more seriously how would the crowd react if a Hindu, Sikh, or a pagan shaman offered a prayer or if a bearded Imam made a plea to Allah?

For millennia, wisdom traditions taught that one didn’t use God’s name in vain as there was a power to the Name to be invoked only in the face of the existential, awesome, and mysterious moments of life. I really wonder if making God so small as to intercede on behalf of my basketball team actually contributes to the triviality of faith. And far more dangerous, I wonder if imagining God as my team’s chief cheerleader contributes to the fanatic certainty so many people have that God is on their side on issues far more important, complex, and combustible than who wins a ball game.

Gathering to root for and support one’s home team is great fun and any of us who are avid fans know the connection and solidarity we feel with fellow fans at a game or when we see someone wearing our teams vestments. And yes when our team wins the championship we can’t help but ask is this heaven or what? But maybe bringing God into it is a bit much.

Anyway, the sporting gods do seem awfully capricious and hard to keep happy. Maybe we sports fans ought to add some sacrifices to propitiate the gods? I have it – what about the owners and the players dedicating a tenth of everything they make per game to feed the hungry and shelter the homeless and we fans loving our neighbors with the same spirited enthusiasm that we show for our team. Do I hear an Amen?