‘Friday Night Tykes’: How Much Should We Push Our Children? 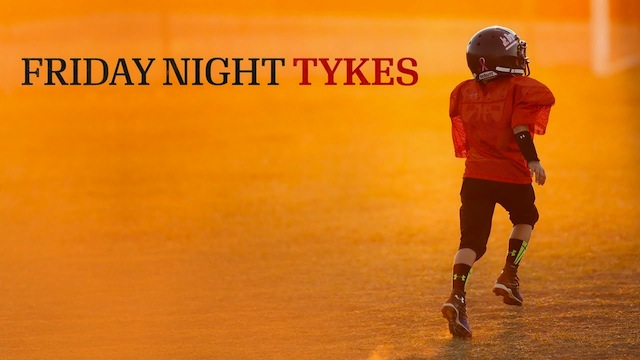 When the NFL says a broadcast about football is difficult to watch because it is too violent, you know there is a problem. This is what the league said about Esquire Network’s Friday Night Tykes, a reality series following several teams of 8-and 9-year-olds in the Texas Youth Football Association.? The trailer shows ranting coaches and obsessive parents, who are essentially fast-tracking kids to head trauma. I kept thinking: I guess in Texas, as long as you pray, you can play to kill.

This network’s portrayal of young boys engaged in grueling training and punishing helmet-to-helmet hits as an expression of masculinity is a troubling commentary about our culture, and the relationship between masculinity and violence.

Here’s what I mean. Traditionally, proof of manhood (and the American definition of heroism) entails displaying macho bravado or enduring abuse and pain. Moreover, there has always been a trope in this country – and for that matter in Christianity – of salvation through violence and pain. The fact is that 46% of American men own guns (compared to 23% of women) and men commit 91% of domestic murders. This connection between masculinity and violence is more than an undercurrent in Friday Night Tykes.

As I watched the trailer, horrified and flinching from the violence perpetrated on (and by) kids, it struck me that this show isn’t really about football at all, but about parenting.? We parents all want our children to succeed and this very troubling show invites us to ask how we are preparing our kids to live in this hyper-competitive economic environment and increasingly complicated world. The parenting philosophy underlying this show is that the more we expect from our children, the more we demand of them, the tougher we are on them and the sooner the better prepared they will be for life.

To be sure, dedication, commitment, sacrifice, teamwork and discipline, are essential qualities of character that need to be cultivated. Texas parents pushing these values as they raise their young football athletes may seem like a different planet to some, but the issue of how hard we push our children is just as alive and well (and ought to be just as controversial) in liberal precincts such as the Upper West Side of Manhattan. There, we find unrealistic expectations of straight A’s, hours and hours of homework, multiple after-school activities, and intensive tutoring. It’s the blue state version of ultra-competitiveness that parents believe will pay off for their children.

Knowing the line between being too hard on kids and not hard enough isn’t so easy, because there’s no definitive line. Our children are each unique, and therefore, respond differently to the pressures placed upon them. Also influencing where we draw the line: how we were raised, our own anxiety, and the way we too easily live vicariously through our children. My children are in their twenties, and I can’t say that I always drew that line appropriately.

It’s easy to spot where other parents, especially the parents in Friday Night Tykes get it wrong. But perhaps the value of this show is that the outrage we inevitably feel will compel us to ask: Are we pushing our own kids that hard? Are we sure? Do we have the right line? Who would imagine Friday Night Tykes could be such a source of wisdom?