Can Ethiopian Jewry’s Sigd Become A Holiday For All Jews? 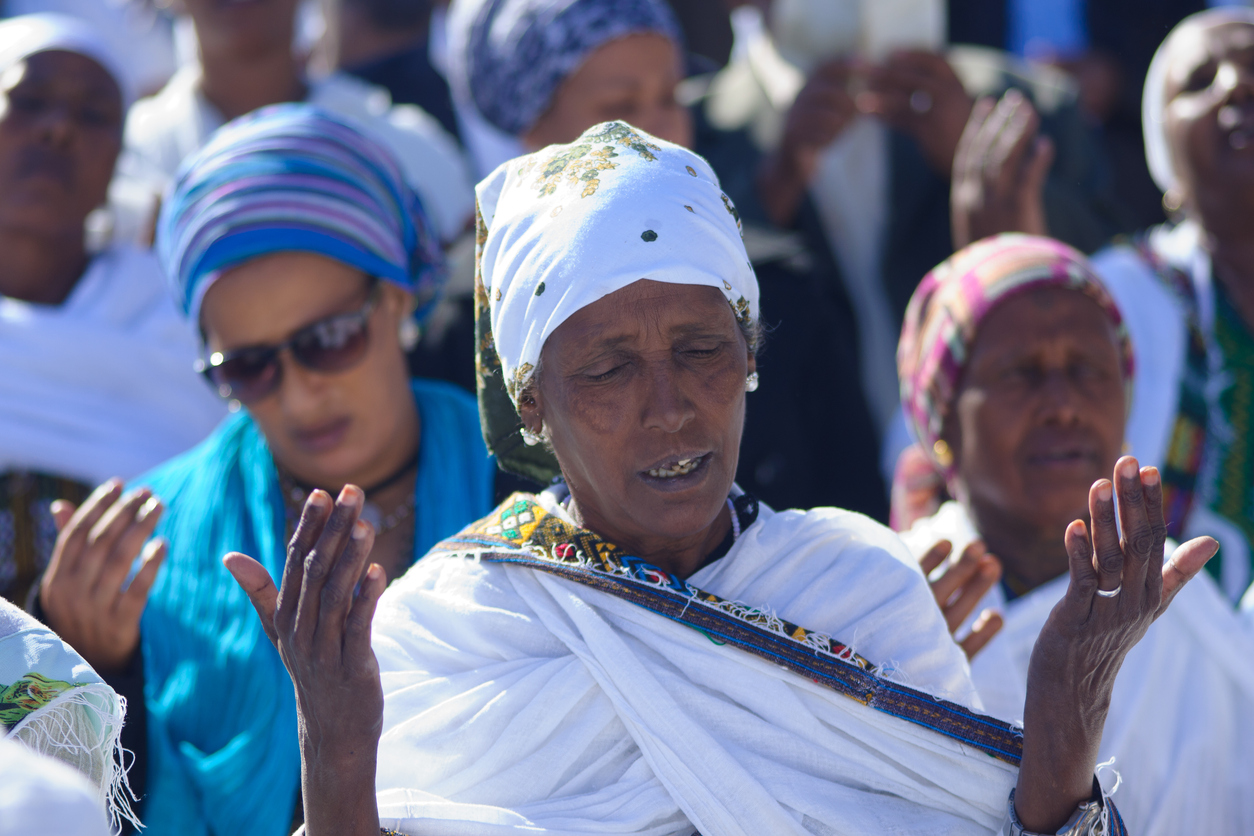 Since 2008, the Sigd has been an official Israeli state holiday, but it is still mainly observed only by the country’s Jewish community from Ethiopia.

Until the middle of the 19th century, the Jews of Ethiopia — the Beta Israel (House of Israel) — lived in almost complete isolation from other Jewish communities around the globe. During this prolonged separation, they preserved and developed distinct religious traditions not found in the rest of the Jewish world.

One such tradition is the annual Sigd holiday, which now ordinarily occurs 50 days after Yom Kippur, on the 29th of Heshvan. On that day, thousands of Ethiopian Jews from across Israel ascend to Jerusalem, primarily to the Armon Hanatziv Promenade that overlooks the Old City or to the plaza adjacent to the Western Wall of the Temple Mount. Since 2008, the Sigd has also been an official Israeli state holiday, but it continues to be observed mainly by the country’s Jewish community from Ethiopia.

Sigd means “prostration” or “bowing down” in Ge’ez, the Ethiopian liturgical language. The holiday commemorates and is patterned after a series of events described in the biblical Book of Nehemiah, chapters 8-10.

The Book of Nehemiah relates how the Jews returning to the land of Israel from the Babylonian exile, in the 6th century BCE, gathered in Jerusalem on Rosh Hashanah (the first day of the Hebrew month of Tishrei) and requested that Ezra the Scribe read to them from the Torah. They prostrated themselves before God, listened to the reading and explanation of the Torah, and then — after being told by Nehemiah not to be sad on this holy day — departed to festively celebrate Rosh Hashanah with food and drink.

Some three weeks later, on the 24th of Tishrei — very soon after having joyously observed Sukkot and Shemini Atzeret — the Jews gathered in Jerusalem for a day of fasting, repentance, and Torah study that culminated in the community publicly recommitting itself to the covenant between God and the Jewish nation.

Those two ancient Jerusalem assemblies, on Rosh Hashanah and on the 24th of Tishrei, are the Sigd’s blueprint. Accordingly, reading from, translating, and expounding upon portions of Jewish scripture — facilitated by the qessotch, the community’s traditional religious leaders — are main features of the day, and the Sigd also involves prostration, fasting, collective repentance, and an annual renewal of the Israelite covenant with God. Longing for Jerusalem and the Holy Temple are among its central themes, as is the importance of Jewish unity. The religiously charged day has traditionally concluded with festive eating.

How did the Beta Israel come to observe this Nehemiah-based holiday, which is not found in other Jewish communities?

One opinion, espoused by certain qessotch (singular, qes) — the kohanim, or priests, who are the traditional religious leaders of Ethiopian Jewry — and Beta Israel rabbis, holds that in the past all Jews kept this annual holiday, but over time the practice was lost by Jews outside of Abyssinia. As Rabbi Sharon Shalom writes in From Sinai to Ethiopia: The Halakhic and Conceptual World of Ethiopian Jewry (Jerusalem: Gefen, 2016): “Some assert that Sigd is a particular, local holiday that developed in Ethiopia, and that it was never known in any other Jewish community. But I would like to argue that in ancient times, Sigd was known among the entire Jewish people, and that due to historical circumstances, it was forgotten, while in Ethiopia it was preserved” (p. 179).

Though the qessotch and Beta Israel rabbis are pleased that the Sigd became an official Israeli state holiday in 2008, they would also like the day to become an integral part of the yearly Hebrew holiday cycle and be embraced by all Jews in Israel, if not all Jews everywhere, rather than remain a holiday primarily observed by the Jewish community from Ethiopia.

In a 2009 address before Shimon Peres at the President’s House in Jerusalem, for example, Qes Semai Elias of Rishon Lezion, the director of the Council of Kohanim of the Ethiopian Jews in Israel, stated that the Sigd contained the “essence of the tradition of [the nation of] Israel as it was expressed in the Ethiopian exile.” He argued that the Sigd’s inauguration as an Israeli state holiday in 2008, while a “tremendous and heartwarming achievement,” was not enough.

“Our next ambition in connection with the holiday is to claim a worthy place for it among the Jewish holidays of the Hebrew calendar, and to thus impart to the month of Marheshvan, which is otherwise devoid of holidays, our own festive contribution,” Qes Semai Elias told President Peres and his guests. “If we persist and believe in our suggestion, perhaps this dream will also be realized.”

In 2012, again speaking at the President’s House, Qes Semai Elias reiterated the significance of the Sigd and promised to “continue to try and convince anyone who is willing to listen to us and has influence that this is a worthy and honorable holiday, a holiday we are all proud of. It can be a leading holiday in each and every town, extending beyond the boundaries of the [Ethiopian Jewish] community and touching each and every person in Israeli society.”

Similarly, the late Qes Emaha Negat of blessed memory stressed to me the intrinsic importance of the holiday for the qessotch, as well as its emblematic significance for Beta Israel Judaism.

“The Sigd is not something that the community created there [i.e., in Ethiopia]. It was observed here, in Jerusalem, after the return from Babylon,” the elderly Qes Emaha Negat told me during one of my visits to him in Netanya, Israel. “And so our community safeguarded it, in order to strengthen Judaism, and we kept it for 2,500 years. Why the rest of the nation of Israel did not keep it, we do not understand. We now want the entire nation of Israel to preserve this heritage: that it be a yom shabbaton [i.e., religious day of rest] for the entire nation of Israel. The heritage of the Beta Israel comes from the Torah and Judaism, and it is important to us that it will not vanish at some point. Just as the Sigd was not forgotten, so too the rest of the traditions of the Beta Israel must not be forgotten.”

The increased contact between the Jews of Ethiopia and the wider Jewish world that began in the 19th century resulted in Ethiopian Jewry gradually bringing its religious traditions and practices more in line with Rabbinic Judaism. Thus, for example, Ethiopian Jews began celebrating Hanukkah, wearing tallitot, and donning tefillin. The early encounters between non-Ethiopian Jews and Ethiopian Jewry were often characterized by the former’s lack of concern, or even their preference, that the Beta Israel’s unique customs would be lost as these were supplemented by and made way for Rabbinic Judaism. This trend, already begun in Ethiopia, continued and intensified with the community’s mass aliyah to the state of Israel.

Other Jews did not, in turn, take on any of Ethiopian Jewry’s religious traditions. It has been an entirely one-sided affair. The importance that the qessotch, rabbis, and others from the Ethiopian Jewish community placed in recent years on having the Sigd become an official Israeli state holiday — and their hope that it will eventually be a day observed by all Israeli Jews — indicates their disappointment with the ongoing unevenness in religious exchange and its implication that Ethiopian Judaism has nothing to offer the wider Jewish religious world.

Having more Jews understand and adopt the Sigd could help mitigate this long-standing imbalance of Jews from Ethiopia taking on the practices of Rabbinic Judaism while not having a chance to offer any of their own traditional religious treasures in return. Israeli Jews from other backgrounds could have the opportunity to connect to the “essence of the tradition of [the nation of] Israel as it was expressed in the Ethiopian exile” by observing a unique Jewish holiday in a month that, as far as most are concerned, currently has none.

“Further,” as Rabbi Sharon Shalom writes in From Sinai to Ethiopia,“the Jews living in their homeland today are very much in need of the messages and focus of the Sigd holiday in Ethiopia, which have eternal relevance: fraternal love, unity, and the formation of the covenant with the God of Israel and Jerusalem” (p. 180). The same may be said of Jews residing outside the state of Israel.

Jewish religious and communal leaders of all ethnicities and denominations would do well to embrace the qessotch and Beta Israel rabbis’ dream for the month of Heshvan, 50 days after Yom Kippur: a “worthy and honorable” pan-Judaic holiday of fasting, prayer, Torah study, and collective repentance; of renewing the Jewish covenant with God; of commemorating the return from the Babylonian exile to Jerusalem; and of yearning for the full ingathering of Jews into the land of Israel and the rebuilding of the Holy Temple.