How Polarization Paralyzes Us 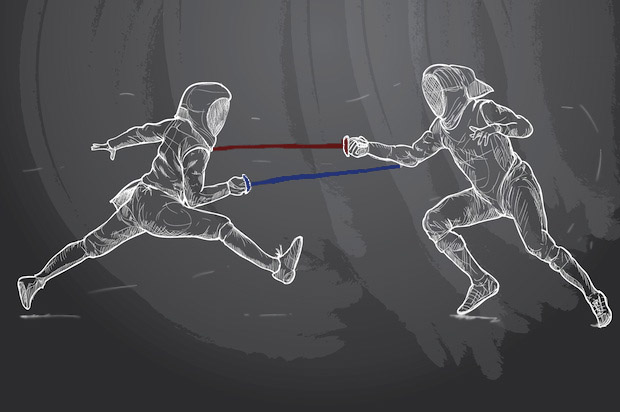 According to the largest political survey in its history, the Pew Research Center for the People and the Press recently found that “Republicans and Democrats are more divided along ideological lines – and partisan antipathy is deeper and more extensive – than at any point in the last two decades… producing rising animosity bordering on a sense of alarm” toward the opposite party.

Moreover, polarization goes beyond politics and is reflected in the personal lives and lifestyles of those on both the right and left. According to the Pew survey, about a third of Republicans and Democrats sort themselves in silos of ideology, politics, culture, geography (rural/city), attitudes towards diversity, who one should marry, whose one’s neighbors and friends should be and religious participation. By knowing one thing about “consistent Democrats” and “consistent Republicans” we can know a whole range of things about them.

Exacerbating this sorting is that we can literally isolate ourselves in an internet, radio, and TV echo chamber in which we never have to see or hear anything that disagrees with our ideological point of view. Perhaps most disturbing: One third of all Republicans (and Republican-leaning independents), and more than a quarter of all Democrats (and Democratic-leaning independents) see the other party as a threat to the nation’s wellbeing.

The conventional take on this report is to lament how dysfunctional and distorted our politics has become, thanks to ugly polarizers. But maybe the problem really doesn’t lie with the polarizers, but with the plurality of Americans who fall squarely in the middle of Pew’s ideological spectrum. While the most politically engaged voters are the most ideologically-oriented Americans, especially in primaries and local elections, people in the middle are relatively disengaged from policy debates and primary voting; they stay home. The fact is, Americans who identify most strongly as liberals or conservatives make up relatively small shares of the American public – 12% and 9%, respectively. In other words, polarization may be driven as much by the apathetic citizens of the middle as by the citizens at the extremes.

Why do we let the polarizers burn down the house, and the bomb-throwing pundits (and policy experts) control the debate? Maybe because, as much as the middle class has been hollowed out, creating a sense of scarcity anxiousness and fear (the perfect conditions for extremes to flourish), we haven’t yet been sufficiently affected in our daily lives. Or perhaps because the problems we face are complex with no easy solutions. Our disagreements about economics, environment, culture and foreign policy reach into deep-rooted assumptions about nature, human nature, reason, society and justice – and they require difficult weighing of contradictory values. Partisanship is to be expected, and it’s surely easier to be distracted by reality TV, Candy Crush and the entertainment of the polarizers themselves.

But it strikes me that the polarizers (who, for the most part, we can assume are decent people) are to a great extent being used and exploited by powerful forces who benefit from genuine conversations that would inevitably transform the power arrangements in this country. Big Banks (too big to fail… what kind of idolatrous concept is that… only “God” is too big to fail!) and Big Government, Big Pharma, Big Insurance, Big Oil, Big Business, Big Food, Big Unions, Big Media, Big (institutional) Religion, Big Military (the military industrial complex)… all have an interest in the polarization remaining just as it is, because this ensures the status quo. Through political? lobbying and underwriting think tanks, these large concentrations of power are playing both sides of the polarization.

Who gets hurt? Who has no voice? Decent citizens who are trying hard to hold a job, keep their families together, take care of elderly parents, raise decent kids, help neighbors, become happier people, connect a bit moreto God/Spirit/Cosmos/Creator. It’s people who simply want a good life (not necessarily a great, amazing, perfect one). Tea Party members and Occupy Wall Street adherants both have serious insights into this truth. But they’re unable to listen into the silence, to absorb each other’s fears and hopes. And they express their views in ways that keep people in the center from hearing their insights.

The common interpretation of this Pew report will blame the polarizers and partisans, as opposed to challenging “We the people” to assume responsibility. The truth is that we all, in our own ways, have inflamed the American house either by disengaging from the debates, or by ignoring and dissing the truths of the other “side.” Given the injustice, exploitation, change and pain so many Americans have felt over the past few decades, it’s understandable. And because none of us have the one solution, we yell louder and louder at each other – thinking that if we yell loud enough, or are outrageous and angry enough, people will listen. Of course, all that happens is that most people stop listening, and the most frightened people on each side get more frightened – and angrier. We mask our uncertainty and doubt in illusions of being absolutely right or coolly detached.

Maybe we don’t have a civility problem in this country. Maybe our problem is we don’t have enough good, fierce, smart, deliberative arguments. We in the center haven’t done our job – the task of engaging in democratic dialogue and dialectical thinking – to find the partial truths on all sides that would lead to new policy mixes that transcend the partisan dead end.

Maybe we need to take back the debate from the polarizers who claim to know the answers, so we can wrestle with each other allowing tears of empathy, doubt, and inspiration to nurture the flowering of new solutions. We need early moral adopters to disrupt the discourse and lead civil, respectful, reflective and loving conversations.

Survey image from Pew Research Center for the People and the Press. For the full report, please click here.