Who Are You, Underneath It All? 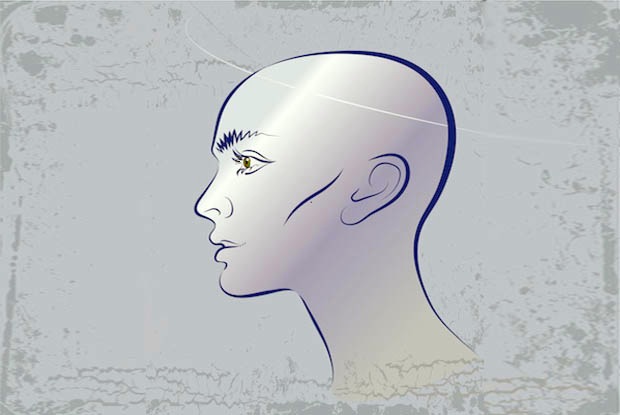 My grandmother, Florence Wolff Landesman, would have turned 100 on October 1. Unfortunately, she passed away this year, eight months shy of becoming a centenarian. As I sat down to read the news online that day, with my grandmother in my thoughts, various reports reminded me that October 1 marks the beginning of Breast Cancer Awareness Month.

One article I came across featured Robin Steinberger, a young mom whose breast cancer battle included having to tell her five-year-old daughter that she was “still her mommy, with or without hair.” As I read her story, I remembered a shocking moment that I shared with my grandmother – one that I now realize taught me so much about her, and the wisdom she acquired during her lifetime.

She never asked anyone how she looked without hair. She wasn’t interested in the answer.

My grandmother survived cancer, but not breast cancer; she had non-Hodgkin lymphoma. When she was diagnosed almost two decades ago, and learned of the chemotherapy’s side effects, her primary concern was losing her hair.

For my grandmother, the way she presented herself to others had always been important. She was born into an affluent New York City family who often appeared in society pages and adhered to the strict social mores of the day. This upbringing had a tremendous impact on the woman she became, one who paid detailed attention to her appearance.

Given this, one of the first things my grandmother did after her diagnosis was purchase a wig. The chemotherapy hit my grandmother hard. She lost her hair very quickly. Every time I visited her, however, she did her best to dress up, apply her makeup and ensure her wig was in place.

Her treatment extended into the summer months, and despite her air-conditioned apartment, the heat got to her. During one of my visits on a particularly hot day, my grandmother exclaimed loudly, “I can’t take this thing anymore!” and threw her wig across the room. There she sat, bald as could be. I was stunned – not because I was seeing her bald. She actually looked great! I was stunned because she was smiling in a way that I’d never seen her smile. “Ahh,” she sighed, as she rubbed her bald head, “that feels so much better.”

Never again did my grandmother wear that wig. She also got rid of the scarf that she’d sometimes use to cover her head. Once so concerned with presenting herself in a certain way to others, she now had no issue receiving visitors, and even leaving her home, with her bald head exposed. She never asked anyone how she looked without hair. She wasn’t interested in the answer.

My grandmother beat cancer. And her hair grew back. But she kept it cut extremely short, never growing it out to the length it had been, prior to the chemo. She stopped fussing over other aspects of her physical appearance, too. She was simply no longer worried about how she presented herself to others. She was happy just the way she was.

That Robin Steinberger news item was an unexpected gift, and I received it on what would have been my grandmother’s 100th birthday. It was touching, and at the same time, thought-provoking. Not only did her story remind me of that moment my grandmother threw her wig across the room, it also encouraged me to reflect on how much strength it took to toss aside convention (that had been a part of my grandmother’s life for eight decades) so she could just be herself.

For my grandmother, losing her hair did change who she was. It was a pivotal experience allowing her to embrace the well-known biblical teaching that we are created in God’s image. She discovered this: Our divine attributes emerge when we stop trying to be what we think society wants us to be, and become who we’re comfortable being. May my grandmother’s wisdom inspire us all to embrace and share our genuine selves.