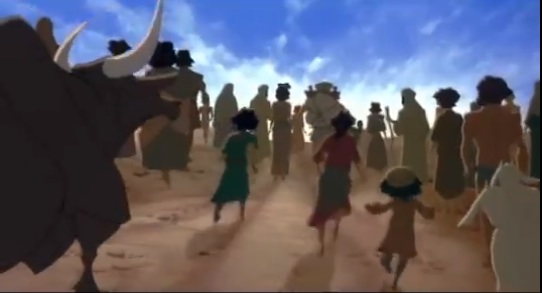 Have you ever seen the DreamWorks animated film Prince of Egypt? The scene when the Israelites leave Egypt is scored by a beautiful ballad, “When You Believe,” sung by Michelle Pfeiffer and Sally Dworsky. The version recorded by Whitney Houston and Mariah Carey, seen here, won an Oscar in 1999:

When the Exodus story is being chanted as a central practice of the Passover holiday, people are invited to experience the “miracle of being redeemed” – of moving from slavery to freedom. Whether historically true or not, the Exodus is one of the great political and spiritual narratives shaping Western culture, as it affirms that human beings have an inherent dignity and right to be free that is ultimately undeniable, inalienable, and inextinguishable.

In fact, the story was so powerfully symbolic that Benjamin Franklin proposed that the design for America’s Great Seal should feature Moses standing on the shore, extending his hand over the sea, causing the waves to overwhelm the pursuing Pharaoh and his army; the motto being “Rebellion to Tyrants is Obedience to God.”

Consider this: There’s a story told of two Israelites crossing the parted sea, slogging through the wet and muddy riverbed, complaining to each other. “Ugh, this is just like Egypt. There we had clay, and here we have clay. Yicch, there we had mortar and bricks, and here in the sea we have mortar and bricks.” And so, they could neither notice nor understand why the Israelites were singing and celebrating on the far shore. For them, the miracle never happened.

There really are different ways of seeing. We not only make choices about what we literally see and don’t see (no one can see it all), but we bring an interpretive lens to the facts we do see – a view of facts that makes our life more or less meaningful. This psycho-spiritual seeing turns facts into signs and wonders, pointing however so subtly to the “miracles” happening all around us.

Here’s what I know: When you believe, you go from seeing life in black and white to seeing life in high def! Can we jump into the sea, take the risk and believe in miracles?