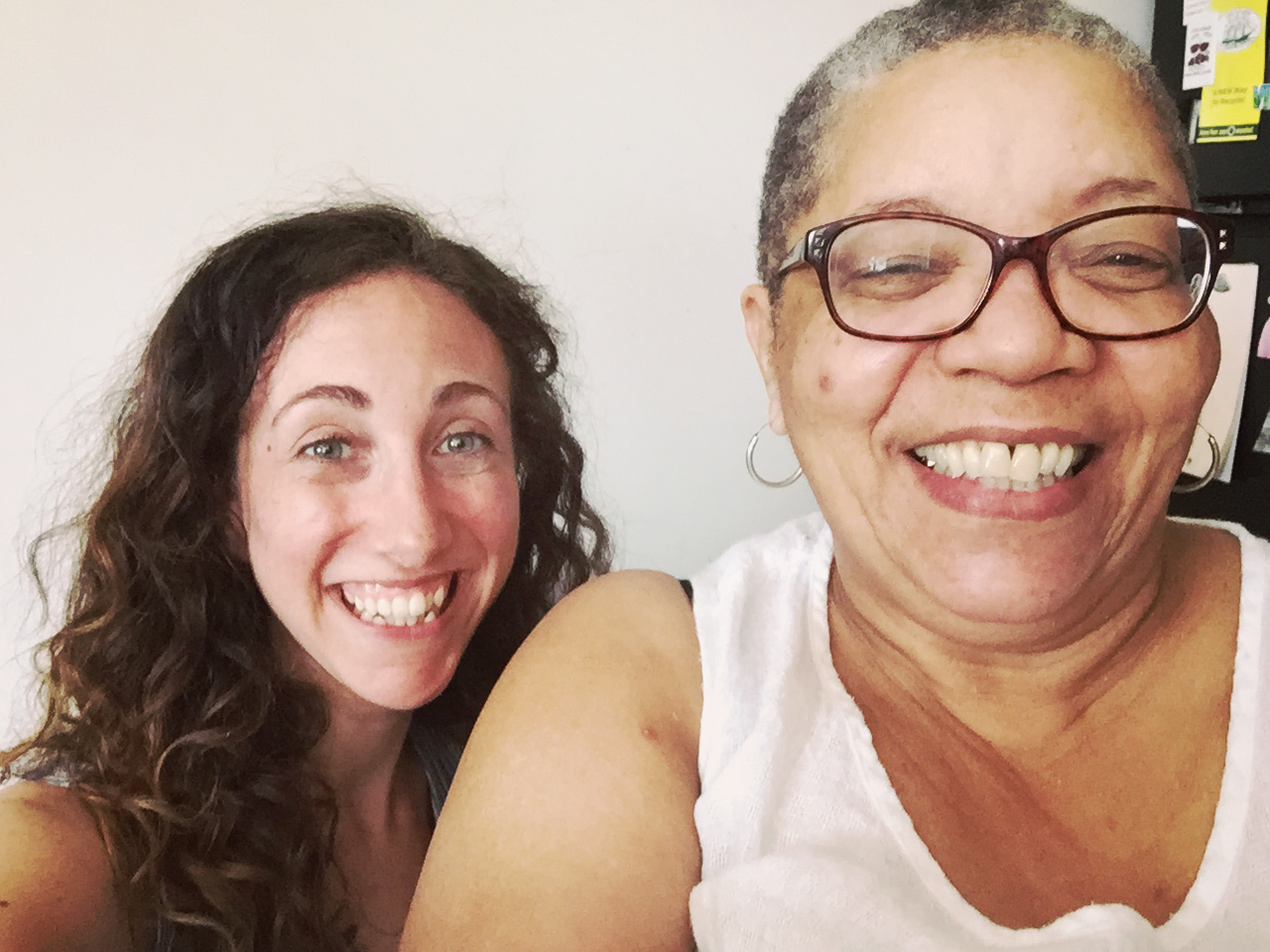 I don’t expect Claudia to answer the phone, so when her voice crackles through the speaker, I rush quickly out of my office to the balcony, stepping into the frigid October afternoon. I’m in London, and when Claudia says hello her voice is heavy with sleep. It’s only 8am on the east coast.

I’ve called to asked her if there’s anything she wants me to leave out in this piece I’m writing – “about you – about us,” I vaguely explain.

“Write whatever you want. I trust you,” Claudia says.

Her laugh, which is more like a giggle, is infectious. She laughs like a woman unencumbered, and it makes me laugh too. Claudia is excited by the piece, though not because she is its subject. She pauses thoughtfully, and then says “mentoring is not something we really talk about in higher education. We talk a lot about advisors but not so much about mentors. About someone who sticks with you through it all.”

She would know. Claudia Highbaugh is the Dean of Religious and Spiritual Life at Connecticut College. Her previous academic institutions include both Yale and Harvard, but it was at the small liberal arts college where I met her, in the Autumn of 2007. She was teaching a freshman seminar: Examining Art Through Religion and Culture.

Our class, 15-odd, met in the basement of the chapel, a room with no windows and tons of books. We read To Kill a Mocking Bird, we watched Alvin Ailey dance shows, our first field trip was to a cemetery. In this class, Claudia did more than just teach us to examine art, she taught us to find it in places we didn’t expect. She used her own life experiences – as a black woman born and raised in Chicago, growing up during the tumultuous Civil Rights Movement – to help us understand our own. In this way, she helped shepherd a group of late-teens through our first semester of college.

We were standing in the doorway after our final session when Claudia approached a classmate, offering her a work study job in the chapel. My peer politely declined, explaining she had one already.

When I began working for her, I had little sense of self. What I did have was a facility for language and a curiosity about the world that endeared me to Claudia. Working for her afforded us a different kind of intimacy. There were only three of us in the basement at any given time. Claudia, myself, and Laurie, the office manager. Both women became guiding forces in my four years at college, and beyond. They were an eventful four years.

When my father passed away the summer before sophomore year, Claudia gave me sage advice: be kind to your mother. This wasn’t the advice I’d wanted. She listened to my anger and grief, but where her mentoring diverted from the sympathy of my friends was in its straightforwardness. Claudia was willing to remind me that I wasn’t perfect, that whatever grief I felt, my mother felt too. And, perhaps, in being kind to her, I would be kinder to myself, as well. Claudia’s office became a place of refuge – it didn’t matter if I needed someone to talk to, or just somewhere to be that wasn’t alone. She created that space for me, an invaluable sanctuary.

Throughout the dissolution of my first serious relationship, Claudia doled out Peanut M&Ms and never made me feel bad for crying. I would often wander from the main office into hers, plop down in the chair and just chat. I’d run my fingers along the spines of her books, stare at the photos on her desk. I never told her this, but I wanted so badly to be in one of those photos. I wanted to be more than a student employee, I wanted to be her friend.

Claudia started out as my advisor in the strictest academic of terms and became a mentor just by showing interest in my life outside the classroom. The hierarchical labels (teacher-student, boss-employee) and the formality of our relationship dissipated. I knew I had made it when she’d let me carry her groceries after only two bouts of arguing; when she made us margaritas after I’d cleaned out her garage.

By this time, I was twenty-one and the things that preoccupied me were, I think, more interesting. Claudia listened as I discussed graduate school – I had a brief love affair with the idea of joining the FBI – or moving to California. When I mentioned my array of plans to my academic advisor, he simply nodded and reminded me that I’d have to pick just one.

As I waded through these options, Claudia was able to help me parse them. She reminded me that my talent lay in words, and that wherever I ended up, writing would undoubtedly be the place in which I felt most successful. As I jumped eagerly from one idea to the next, she remained resolute in her superior knowledge of me. I don’t think she realized that she would end up the subject of one of my essays; though maybe she did.

When I eventually made my decision – an MA in creative writing, she read and re-read my essays. I was no longer a student, but instead someone who Claudia, for her own motivations and feelings, wanted to help. Not just out of a sense of friendship, but of mentorship. The pride she might feel in seeing me succeed.

I didn’t move to California or join the FBI. I wound up in London for my MA, and now live here, writing and working. Whenever I return to the States to visit my family, I make a trip to Connecticut. It was a languorous Saturday evening on one such trip in 2016, sipping Pinot Noir in front of her fireplace, when she turned to me and said, “You know, we had very similar childhoods.”

She draws parallels between us that only a close examination of us as people would appear to be true. I often wonder when we’re out in public, buying groceries together or that time I helped her pick out her car, what people think we are to each other. We do not look like we belong together, but there are few people with whom I feel so comfortable. Her continued mentorship has motivated me to make her proud. When I get good news, I tell my mother, and then I tell Claudia.

With the thousands of miles between us, maintaining our relationship has required more effort than it ever did. When I used to be able to walk down a hallway and throw myself into her office without ever knocking, I now have to plan – coordinate time zones and schedules. I don’t call as often as I’d like, but when I do, we talk for hours. It is a relationship worth the effort, because what I get out of it – and what I hope she gets out of it – is constant learning and understanding. And a lot of laughing.

Ten years since that day she hired me, with trepidation clear on her face, Claudia is one of my best friends, and my mentor. We don’t pick our mentors because they look like us. We pick them out of a feeling of kinship – of a connection of spirit and mind, where both are nurtured and grow because of the other. I still reach out to her for help and advice, for understanding.

The morning after the 2016 election, she was the first person I spoke to. Her take on the world as it began to change was one that I wanted to hear, and I still seek her out. As my own thoughts formed and took shape, I found myself wanting to know what Claudia thought. Her opinions might no longer be specified at an issue in my personal life, but they continued to inform my own. If I disagreed with her, I wanted to understand why. Happily, I rarely disagreed with her.

I saw her most recently in June; we had clam strips by the beach and talked. We sat in her kitchen singing along to Mo-Town songs until one in the morning, draining our glasses of rosé and decimating her tub of cashews. During our most recent talk, she mentions for the second time about coming to visit me in London, and I have to try not to let my enthusiasm overwhelm us.

The conversation moves on. “You know I don’t really eat that much chocolate anymore but I just have to have it in the house,” Claudia says.

“Oh I know. In that drawer next to the fridge.”

“You know about my secret chocolate drawer!”

“Of course I know about your secret chocolate drawer!”

Claudia is laughing again, and so am I. On my way home I buy a bar of dark chocolate and eat it all on the tube, and I think about her; about how much she means to me, how irrevocably I have been shaped by her wisdom and eloquence. Most of all, how lucky I am that I convinced her to hire me all those years ago, and that she stuck with me through it all.

Gabriella M Geisinger is a London based freelance writer, born and raised in New York City. She has her MA in Creative Writing, Narrative Nonfiction. She writes most often about the intersection arts & culture with social justice. You can follow her on twitter @gmgeisinger and see more of her writing at gabriellamgeisinger.com.