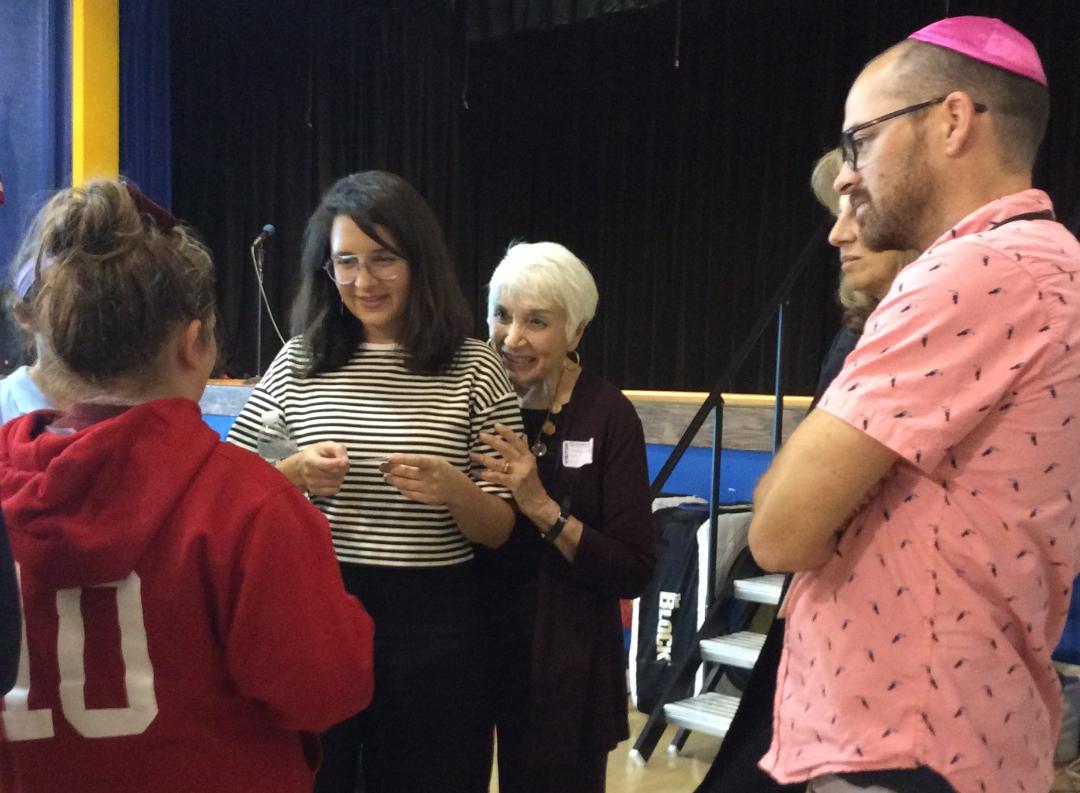 I had most of this article written for me by the eighth graders at Community Day School in Pittsburgh.

A graduate of the school, Bari Weiss, a journalist now working as an Op Ed editor at the New York Times after stints at the New York Sun, Wall Street Journal and Tablet, spoke recently to an assembly of middle schoolers there.

Weiss is probably a rarity among New York Times staffers for believing that her alternate career path would have been the rabbinate had she not gone into journalism.  She dates her interest in journalism to her activism as a pro-Israel college student and her realization that by writing about the subject she could have an influence.

She has still had the opportunity to officiate at five weddings.  However, as a journalist writing for a broad audience, Weiss reaches those who might not come into contact with a rabbi otherwise.  In fact,Weiss  has written pieces that many rabbis would be proud of, such as a piece teaching about what Rosh Hashanah is and why non- Jews can access aspects of it too( though being a Jewish topic there are always other opinions).  As she told the students, when she relates to issues she leads with her own Jewish identity which is of deep importance to her.   However, her pieces are on wide ranging topics  many connected to Jewish issues, such as those on Harvey Weinstein or the value of cultural appropriation.

At an assembly in the gym of the school in the Squirrel Hill neighborhood of Pittsburgh, where Weiss also grew up, two of the current middle schoolers, Madison Zunder, president of the student council and Shuli Dernis president of the tefilah council, asked Weiss questions compiled by queries to the entire student body.  The middle schoolers thought it worth asking a newspaper editor about such vital and momentous matters as Netflix or Hulu and Mineo’s or Aiello’s (it’s a Pittsburgh thing), her favorite Jewish food and favorite Yiddish word.

Weiss responded with her own research doing an informal poll of which social media outlets they preferred – the majority use Snapchat and Instagram and few use Facebook (a good thing since not all of them are thirteen, the threshold age for an account. ) The group also took the opportunity to ask such hard- hitting questions as what advice would she give to her middle school self, how her Jewish identity has changed through the years or what thing she wrote that she regretted.  Weiss was game for all that came her way, telling her interrogators, “Grill me like on CNN.”

Weiss told her audience that her favorite Jewish holiday is Yom Kippur.  She explains that she finds it “hopeful and uplifting” and the chance to give one’s life a “reset.”   She elaborated that the ability to repent creates an outlook that is essentially optimistic, since repentance creates an ongoing possibility of living better than one has previously.

When asked about her Jewish identity she responded that her Jewishness is something that strengthens and guides her.  She sees being Jewish as a “roadmap for how to be courageous” and to that end admires figures like Natan Sharansky and Hannah Senesh, as well as Abraham’s courage to argue with God.  Part of her Jewish identity is  that she feels sharpened by those with different opinions.

For Weiss, her time spent in Israel has been vitally important to her development as both a Jew and a journalist.  Before she went to Columbia as an undergraduate, she spent 2002 -2003 on the United Synagogue of Conservative Judaism’s Nativ year-long program in Israel.  After graduation from college in 2007, she was a Dorot fellow and wrote for Haaretz, as well as freelancing.

And her favorite part of her current job?  Easy: meeting interesting people.  She told her audience that now working for the New York Times, “They all call you back.”

In a brief interview in the school library after her lively discussion with the middle schoolers, Weiss reflected about how she makes editorial decisions.  I asked her whether she found more writers gaining the source of their authority from some aspect of personal experience or whether opinion writers were still sought after mainly for their expertise.  Weiss looks for both, the recognized experts in a field to give their opinions as well as those whose experience gives them a perspective that others should learn from and understand.

For instance, after the bombing at an Ariana Grande concert in May, 2017 Weiss thought about other times that teenage girls had been targeted; the Dolphinarium bombing in Tel Aviv on June 1, 2003 came to her mind.  She got in touch with as many of the survivors of it she could find (there were 132 injured and 21 killed) to solicit an Op Ed on what it means to be a teen in a bombing like this.  The poignant and powerful piece  “A Terrorist’s Teenage Target” resulted from Weiss’ reaching out to Tanya Weiz, one of the survivors, to discuss her own experiences as a teenager harmed by terrorists.

This is an example of how, as an editor, Weiss is constantly seeking out new voices.  In fact, if she finds interesting Twitter comments on an issue of the moment, she may reach out to their author to see whether that person might want to discuss the ideas at greater length.  When I  mentioned that I had been at two programs over the summer – the Beyond Walls  program at Kenyon College and the Writing for a Broader Public program at the Collegeville Institute – to encourage clergy to write, Weiss replied that she is “amazed that more clergy don’t write.” She gave the example of her own rabbi David Ingber of Romemu in New York City who wrote a prayer for forgiving Trump voters in Tablet before Yom Kippur.

So, again, thanks to those middle schoolers.  They were a great opening act for me since the art of interviewing is all about figuring out the best way to relax a subject so they will feel comfortable telling you what you want to know, even if they hadn’t been sure how much to say initially.  Their clever tactic of loosening up even a powerful editor worked wonders to get her to say what Wisdom Daily readers and others are eager to hear, that the voices of all kinds of folks belong on editorial pages.

Community Day middle schoolers, I remain grateful for your assistance.