What Dracula’s Castle Taught Me About The Perils Of Bigotry 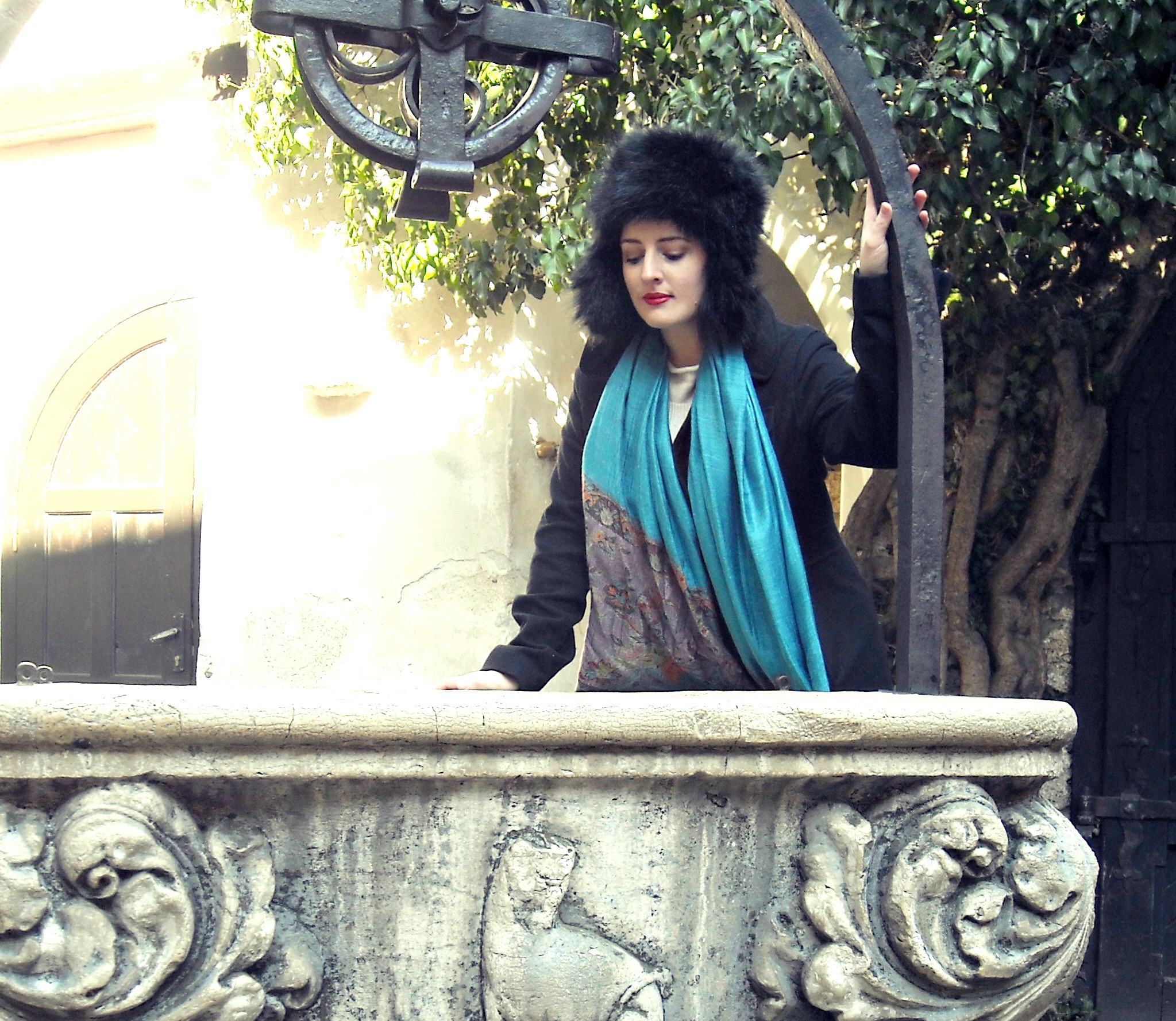 I’m penning this from a makeshift office that was either a dungeon or wine cellar many centuries ago, either of which is apropos for a digital nomad like myself. It’s my last week in Romania, and I’m currently bundled up in the city of Brasov, Transylvania. Nestled in the Carpathian Mountains, the town is as mysterious and gothically beautiful as one would imagine, riddled with folklore, but sophisticated enough to maintain a kind of aloofness about it. It’s also a place of hardworking people who just want to be left the hell alone. I can relate.

Naturally I had to visit Bran Castle, otherwise known as Dracula’s Castle, THE big vampiric kahuna. I hitched a ride with a gentleman from Rome named Elvio (yep, that’s Italian for Elvis) and a Brazilian student name Tiago, and together we made the 30-minute drive to the village of Bran. Even before we reached the entrance, we were greeted with a pop-up market selling clothing, crafts, confections, cheeses, sausages, wines with Vlad’s face on the label, and every other conceivable kind of Dracula memorabilia. Beggars wove in and out of the crowds, competing with vendors and guides pitching various tours. Banners fluttering along the castle esplanade warned visitors to enter at their own peril, that under no conditions must they venture out past midnight, etc., etc. It was all a good sell, but ultimately founded on a total lie.

Here’s a brief rundown on the Bran Castle/Bram Stoker/Vlad-Dracula backstory:

Bran Castle, while in existence during Vlad “The Impaler” III’s reign, was never actually home to said impaler, though multiple accounts claim he was held captive there for a good chunk of time. And, while Vlad certainly made a bloody name for himself in the history books (he once boasted about raising a “forest” of impaled Turks), his ultimate demise came at the hands of the nobles. The years following Vlad’s death were punctuated by tales of his monstrous spectre revisiting the land, though in all fairness I suspect rising from the grave in one capacity or another was par for the course in medieval Transylvania. Anyway, fast forward to the Victorian era and a certain Irish writer who would never set foot in Romania, but consulted a map and chose a juicy looking mountain to set up Dracula’s shop without knowing it was already ocupado. And well, the rest is history.

After taking respective turns as both royal and government property, Bran Castle was acquired by a Romanian company, restored, and opened to the public. Since then, it’s been a world-famous attraction, with hundreds of thousands making the pilgrimage each year in hopes of getting in on some vampiric action. Alas, the poor bastards (of which I include myself). Bran Castle is a far cry from what you’d expect from an iconic undead’s abode, unless the undead in question was running a quaint Bavarian-style Airbnb. (No pun intended) Bright, welcoming, and inoffensively decorated (aside from the iron maiden on display, and even that looked suspiciously comfy), the castle is absolutely lovely and absolutely not the kind of place you’d expect Bela Lugosi or Gary Oldman to frequent. While there was no shortage of narrow winding staircases, suits of armor, gaping fireplaces, and spectacular views of the Carpathian Mountains, the only thing I could imagine going bump in the night was a toe while getting out of bed to use the chamber pot.

So it wasn’t what I, or anyone else expected, no biggie. It was a strike-through on my bucket list (if I had one) and an afternoon spent in good company. But the last leg of the tour turned out to be exactly what I’d hoped for, and then some.

Unlike the rest of the castle, which is kept in pristine condition, the courtyard of Bran is fantastically eerie. Wild vines and unkempt foliage creep along the walls and over the window ledges and balcony balustrades, while a series of uneven stone steps ascend to an elevated well and shadowy adjacent promenade. (Oh, the trysts!) Crude seats are carved into the walls in no discernible order, worn down by centuries of bottoms. The whole setting is gloomy and gorgeous, and the cake topper was a contraption on display the likes of which I’d never seen, an enormous set of scales once used to “weigh” those guilty of trafficking with the devil.

Medieval belief held that members of Satan’s posse were actually lighter in weight than their physical appearance suggested (see? It’s totally possible), thus requiring a “putting on scales” to determine whether they were guilty or innocent. First the accused was stripped of his or her clothing and searched for any possessions that would add extra weight (“I bet gallons of water were chugged that day,” Italian Elvis remarked). They were then seated on one side of the scales, while an amount judged to be in correct proportion to their appropriate weight was placed on the other.

If they were deemed lighter than the amount they were weighed against…they were tortured until compelled to confess, or else put to death. If they were equal to or heavier than the allotted weight…they went free, and in some cases, received an official document that protected them from future accusations. Well into the Age Of Reason, people were still volunteering to be weighed in order to obtain said certificate; it was a big to-do in devout regions, with an actual wait list. Side note: I do wonder if this backfired every now and then. How much would it suck to plan a smugly pious outing for the day to get your soul certified, only to come up short?

It all sounds easy-peasy, right? Yeah, no. Obviously there was a wide margin for abuse, and because these are humans we’re talking about–repressed, witch-crazed humans at that–abuse they did. The accused could, and often were, deliberately weighed against all manner of items that would cause them to fail the test. (Gratuitously stacked bibles were a popular choice. Shocker.) And because the court collected money for every case they “weighed,” with a little somethin’ somethin’ on the side if the outcome favored the accuser, sanctioned corruption became big business. Sound familiar?

My companions all made similar comments regarding the scales, generally along the lines of, “How could anybody believe something so stupid?” And all I could think was, did we ever stop? Stupidity is, I think, nothing more than glorified ignorance. And while I’d have been fascinated by those courtyard scales at any point, I can’t deny that current events happening all over the world–particularly in my own native United States–greatly influenced my double-take. Because such a device can, and has been, resurrected right here in the 21st century, albeit metaphorically, and applied under a similar guise. Men, women, children, immigrants (because apparently they’re a species apart) and hell, even animals: we’re all on the scales, measured daily and, more often than not, in deliberate and gross disproportion to whatever identifier–race, ethnicity, gender, religion, sexuality, class, reputation–has been chosen to determine our value.

I suppose the inverse also applies. I’d be the first to admit that I step onto those scales every day, and maybe you do too. I weigh myself against a rotating roster of people and personal demons alike, and all the objects of success and happiness and worthiness that, more often than not, I fail to strike a counterbalance with. If you grapple with anxiety and depression (which I do), you make your bed on those scales.

We humans are nothing if not predictable in our capacity to fear and hate and misjudge in countless–and yes, sometimes stupid–ways. Nor are we so disinclined to weave an alluring legend around that which doesn’t deserve it–like Bran Castle. Or mustachioed impalers. Or the assortment of celebrities we obsess over or worse, elevate to positions of power. While those courtyard scales may qualify as a historical relic now, in the end medieval Transylvania is 17th century Salem is Nazi-occupied Europe is wherever bigotry parades as morality and cruelty is embraced as spectacle, or otherwise ignored altogether.

Dracula’s castle was a bit of a letdown, but it’s still a thing of undeniable beauty, intrigue, and potential. I’m fairly certain it could maintain relevance without the unfounded mythos and equally unmatchable expectations. Ditto for us humans, provided we can break the garlic-and-pitchforks cycle of our ancestors, within and without.  Monsters are spellbinding in stories, especially when they’re capable of transformation. In real life, however, they’re much trickier to detect and defeat, all the more so when they move under a collective–and often contradictory–identity.

I’m not sure what the human soul weighs, if it can be weighed at all. Then again, I don’t believe that was ever what those scales were about anyway. They still aren’t.

Emily Linstrom is a writer & artist currently living abroad. Her work has been featured in Three Rooms Press, Nailed Magazine, Rogue Agent Journal, Prick of the Spindle, Queen Mob's Teahouse, Scrutiny Journal, Flapperhouse, Homestead Review, American Slander, Misfit Magazine,The Wayward Post, and Yes Poetry, as October's featured poet. Linstrom was the first prize recipient of Pulp Literature Press's 2015 The Raven short story contest, and is a regular contributor for Quail Bell Magazine, as well as feature historian for The School of Witchery. You can view her work at: www.emilylinstrom.com